The Mars Exploration Family Portrait is expanding, and I need your help

I’m happy to announce that the Mars Exploration Family Portrait is expanding to cover the rest of the solar system! 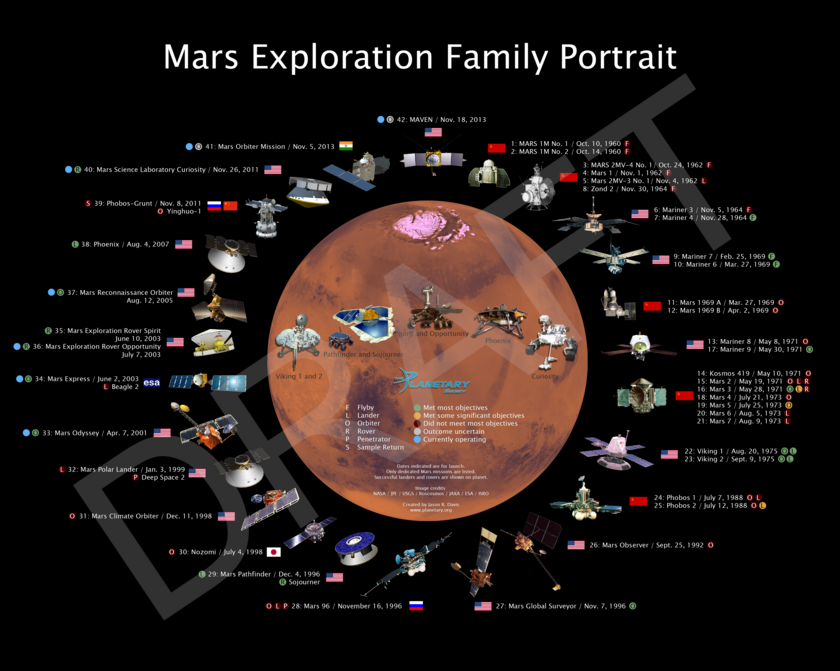 Back in December, I received an email from Robert Sieg, a self-described amateur graphics designer and space enthusiast. Robert created a Venus Exploration Family Portrait using my same format, showing every spacecraft ever sent to our cloudy neighbor. It has been previously suggested that I expand the Mars portrait to cover the entire solar system, but I was hesitant—these projects take a lot of effort and must be perpetually updated.

But since Robert has graciously knocked out at least one of the other planets, let’s go for it. Seeing the spacecraft that have explored all of the planets, moons, asteroids and comets together in one impossibly massive poster will be quite a sight. I’m already imagining how lonely Uranus and Neptune will look with just Voyager 2 sailing past.

Before we expand the series, I want to make a few design changes, and I’m asking for feedback. The challenge in creating any decent infographic is to effortlessly display as much information as possible without creating clutter.

To that end, my first change is the elimination of the mission description lines. I found it too cumbersome and subjective to summarize each mission with just one line of text. How do you convey years of painstaking effort by scientists and engineers in one short phrase? Saying “missed planet” or “orbiting Mars” just doesn’t seem to do these spacecraft justice, so I’d rather place them all on equal footing by eliminating the descriptions.

I do, however, feel it is important to note whether each mission was a success, partial success or failure, so I added a color coding system to fulfill that job. I realize I just finished saying how simple descriptions don’t do a mission justice, but I think that in order to tell the overall story of the exploration of each planet, we need to at least indicate whether each mission succeeded or failed.

I also received feedback that there should be a way to note the different components of each mission.  For example, I had previously not indicated that the hugely successful Viking missions contained both an orbiter and lander.

Finally, I felt it was important to give a tip of the hat to missions that are still operating. I put a blue dot next to any mission still going strong, such as Mars Odyssey—at your service since 2001.

So, before we move on to Venus, I’d love for our readers to weigh in.

I've already received some preliminary feedback lamenting the loss of the description lines. Do you agree or disagree with my changes? What about the color codes—are they too cryptic? It was also suggested that I run the graphic through a color blindness simulator to make sure there is contrast between the colors. I did that, and at first glance it looks like the colors maintain different shades. Is there anything I’ve missed or could do better? I hope you’ll leave me a comment or send me an email.

My only suggestion is that there should be some form of consistency between mission portraits. The Pathfinder lander sits opposite an actual photo of the rover, and you can see there is a strong clash in styles. The lander is also missing the drop shadow other surface probes have. What about showing failed landers on the surface, separated from the successful group by your legend? Seems just a bit unfair given that we know Mars 3 has a successful touchdown, but I understand if you have to draw the line somewhere. Does a cruise stage deserve a portrait both outside the planet and inside (for its payload)? This may reduce some clutter.

I thought you guys did it already....if you're going to expand it, just do different posters for Venus, the Moon and the outer Planets—together. I mean 60% of the planetary missions have been to the Moon and Mars, the moon should get a poster of it's own, and Venus, because they tried....

Is there a comprehensive table or list of all the planetary missions? That would seem like a good starting point. I have seen a graphic that showed all mission, but I cannot find it at the moment. It was very different from what you propose.

I would prefer something other than Outcome Uncertain for the missions on their way to Mars, that makes it sound like we lost contact and are trying to re-establish. How about. Future Endevor, or In Transit

Nick: Agreed, but it's tough to find a high-quality, copyright-free version of every spacecraft that is clear enough to cut out in Photoshop. For some missions (especially older ones) I can find either a real photo or a rendering, but often times not both, hence the unfortunate mix. But I see what you mean about Pathfinder. I've thought about including failed landers and rovers on the surface. It could be worth trying in a future version, but I'm worried it will introduce too much clutter. If we don't use cruise stages on the outside of the planet, my only other option would be to use the payload, which I already have portrayed on the planet (except for the failed payloads). Messy: Yes there will be a separate portrait for each planet, and the Moon will also get its own poster. We'll also do small bodies like asteroids and comets. Matt J: There are several: http://www.planetary.org/explore/space-topics/space-missions/ http://nssdc.gsfc.nasa.gov/planetary/projectdata.html Wikipedia also does a good job at cobbling together these types of lists: http://en.wikipedia.org/wiki/Exploration_of_Mars Ryan: Great suggestion, I agree.

Consider superimposing failed landers and probes beside their mother ships. There were several Soviet Mars craft launched in 1973 which are not included on the poster.

Kim: That's a good idea for compromise between not including them and having them on the planet. The '73 missions are on this latest version; I think you're referring to an earlier one. Anyone else: No one has mentioned the color codes in place of the descriptions, which I'll take as a good sign, but I'd like to hear what you think of those.

Concur with listing mission and date (indicating all the pieces-orbiter, lander, subsat) and a success code. You could include mission data - like the first paragraph from a mission overview, suitably footnoted - on a second page which could be printed as the back of the poster. I'd like to see one poster per planet plus one for asteroids and another for comets. I think it makes a real point about how few close up observations we have for the small bodies and giants. If you date the graphic then missions could be tagged as failed, done/successful, on-going, enroute, and planned. That should extend the graphic's currency for at least a couple of years.

For the symbol indicating status/outcome, I would suggest not using colour alone to distingish between them. Since you already using a letter to indicate the type craft, I suggest different shapes ... circle - in transit right triangle (play) - active square (stop) - failure star - successful, decomissioned

I would like to suggest a Lunar Exploration Family Portrait. I came across this page on our site: http://www.planetary.org/explore/space-topics/space-missions/missions-to-the-moon.html while researching the sample return vehicle for LUNA 24. The page need some updating but at least it's a start.

I'm in agreement with the slight change in use of the symbols for in Transit/Active/Failure/Decommissioned instead of colours (or at least change the one similar colour to something different). I am legally blind and found that the two blue/green colours currently being used made it hard to distinguish between them. I'm sure others may have similar difficulty.

John: Interesting idea. I’ve thought of having a table accompany the graphic, but it didn’t occur to me I could move the failure/success codes there as well. Michael / Krynne: Symbols might be the answer, so long as I can present them in a way that doesn’t clutter things. Thanks. Tom: Yep, we plan to do a lunar portrait as well.

I'm all for fether space exploration and understanding of what's out there. The complexitys of such journeys or excursions is questionable to risk people's lives we must do our homework.for we can't afored any mistake as we all well Know NASA has bad accidents in past

May be to late but: the names Pathfinder & Sojourner are reversed from the graphics. The MGCO Mars Geological & Climateological Observer mission failed...that's the spacecraft we believe exploded on the braking burn for orbit. Did you want to include that? I recall it flew in 1993.