Fifty years ago, on July 31, 1964, NASA's Ranger 7 spacecraft purposely plowed into the moon. It vaporized in an area south of Copernicus crater on the outskirts of Oceanus Procellarum, the Ocean of Storms. Before it crossed into oblivion, Ranger 7 sent home humanity's first up-close pictures of the moon, paving the way for the subsequent Surveyor, Lunar Orbiter and Apollo missions.

To mark the anniversary, NASA's Jet Propulsion Laboratory has re-released "Lunar Bridgehead," a half-hour, 1964 documentary on Ranger 7. It's wonderfully campy, with grandiose narration, an epic soundtrack and great historical footage. It's also quite informative and packed with details that might not make the final cut of a modern non-fiction space film.

So, grab your skinny black tie, light up a cigarette in the control room, and enjoy the film.

It's hard to believe, but in 1964, just five years before Neil Armstrong and Buzz Aldrin set foot on the moon, the best photos of the lunar surface still came from ground-based telescopes. Project Gemini was in full swing. Americans were learning how to live and work in Earth orbit. But NASA had yet to send a successful probe to the moon, or even crash something on its surface.

With the Apollo program looming on the horizon, NASA needed a closer look at the moon's features, and sought one with a series of spacecraft called Ranger. The plan was simple: equip the spacecraft with television cameras and crash-land them into the moon, providing high-resolution pictures of the surface.

The execution of the plan proved more challenging. Engine failures kept Ranger 1 and 2 stranded in Earth orbit. Ranger 3 and 5 missed the moon entirely. And Ranger 4 lost guidance, crashing into the far side of the moon.

The spacecraft's design was simplified for Ranger 6. All science instruments were ditched except the cameras. Ranger 6 lifted off on January 30, 1964. It was a perfect launch, a perfect trajectory and a perfect impact—right into Mare Tranquillitatis, the eventual landing site of Apollo 11. There was just one problem: The cameras didn't work. It was later revealed that a cloud of leftover fuel ignited as the rocket staged during ascent, causing a power surge that fried the camera system.

So for Ranger 7, NASA and JPL found themselves in a do-or-die situation, with an anxious human spaceflight program looking on. Fortunately, everything worked, and the world got its first up-close look at the moon. 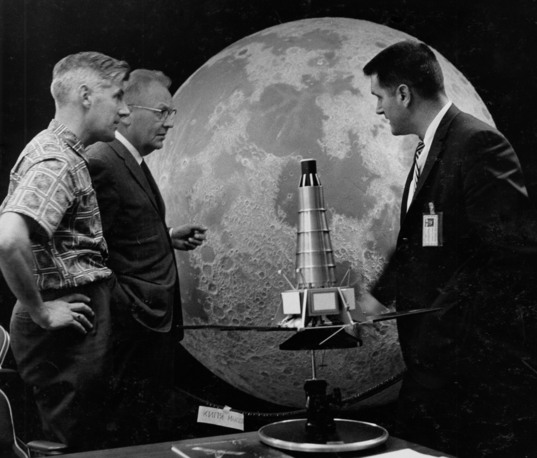 My favorite scene from Lunar Bridgehead comes at 21:45, when we see Ewen Whitaker, Gene Shoemaker and Gerard Kuiper examining the initial Ranger 7 photographs. This is a watershed moment in planetary science, and it's somewhat underemphasized in the film. Kuiper was Ranger's principal experimenter (now known as a principal investigator), and his co-experimenters included Whitaker and Shoemaker.

In the scene, the three scientists are looking at Polaroid prints from the Deep Space Network satellite dish in Goldstone, Calif. Capturing backup Polaroids was a common practice in the early days of planetary exploration. They offered Kuiper's team a tantalizing glimpse of what Ranger had seen as it plummeted to its demise, while the high-resolution images were being carefully developed in a photo lab. Until that moment, no one on Earth had ever seen what the moon or any other world looked like on a such a small scale.

I was previously aware of Lunar Bridgehead because I used some of it in my own film, Desert Moon. Desert Moon chronicles the story of Gerard Kuiper, his team's contributions to the space race and the dawn of planetary science. We found a copy of Lunar Bridgehead on a 16mm film reel in the basement of the University of Arizona Lunar and Planetary Laboratory, and had it digitally restored. Our version is slightly colorized, with a rich sepia tone that adds to the film's vintage look.

I've been fielding a lot of questions about when Desert Moon will be available online—right now it's only being shown at the University of Arizona Flandrau Science Center in Tucson. We're currently pitching the film to Arizona Public Media and NASA TV, and a DVD release may be in the works. I've also had to slog through a lengthy legal process regarding the film's copyright status. My ultimate goal is to get it online for free, and that will happen—eventually. In the meantime, check out Lunar Bridgehead, which gives great insight into the science and engineering behind America's early efforts to shake hands with the moon.

This image from NASA's Lunar Reconnaissance Orbiter shows the Ranger 7 impact site, in an area renamed Mare Cognitum, "The Sea that has become Known."

Awe yes! The good old days! Thanks for the great story!

Jason - regarding Gerard Kuiper --- he is the same, who theorized the outer planetary system belt, right? Is this the time frame that Gene Shoemaker theorized crater counting for body ages thus the great bombardment period established approximate time frame? Is there any historical point of interest you may have run across on Ewen Whitaker?

This is marvelous. It is great to Gene Shoemaker and Dr. Gerard Kuiper. If you look carefully, you can see Jules Bergman, ABC's most excellent science reporter. The smoking was a hoot. I remember my first computer job way back when...I kicked all the smokers out of the computer room because the smoke was causing disk crashes in the removable media. I love the narration by Art Gilmore. The ultimate narrator in this mold was Marvin Miller; check out his super-camp narration for Forbidden Planet (I think he did Robby the Robot also): https://www.youtube.com/watch?v=PJzXTuTipTg

Hi Bob, Yes, Kuiper is the namesake of the Kuiper belt. Some scientists argue his original theories about the belt do not match what we know today, but regardless, he received the honor. I know less about Shoemaker's work, but he founded the U.S. Geological Survey's astrogeology branch in 1963. He and Kuiper were occasional rivals but mostly amicable. Shoemaker became the principal experimenter for Surveyor's camera, with Kuiper as a co-experimenter. We interviewed Ewen for Desert Moon and he's a big part of the film. His contributions were vast, but most notably he pinpointed the location of Surveyor 3, which set up the visit by Apollo 12 astronauts. Fred -- I love the Forbidden Planet trailer! Jason

I just love the narration, campy but dramatic. I remember watching this on TV when I was a kid and I was fascinated. But, anyway, it is interesting to note that when this file was done, JPL was perceived (by the public at least) to be a sideshow to the Human-spaceflight Directorate at NASA because of Apollo missions. I think there has been an interesting reversal. In my opinion (and this is just an opinion on my part), the roles have been reversed and manned missions are a sideshow while the JPL Science Directorate missions are the real stars.

Hi Jason, Fred, -- Thanks Jason. Jules Bergman... that man was great! So was NBC's Frank McGee. He did the 2 train rendezvous which a train carried the Gemini or Agena spacecraft models on the orbital path for the Gemini mission they were covering, 8 I think, Neil - MC & Dave - SP) all the way to docking. Other reporters laughed at him until they saw the trains clearly show what they could not describe in words to the viewers. It was awesome. I hope NBC News kept that tape because it is a great tool for showing rendezvous in action. Gene Shoemaker had the Shoemaker-Levy 9 comet named after him.

Fred - nice trailer. The scene that had the message coming in with the 3 men standing together, the middle man is the actor who played (will play) Rojan, the Kelvin Commander, in the Star Trek episode By Any Other Name.

This is great - what memories! Very dramatic narration. It makes you wonder how the style of narration that is done today will be viewed in 50 years. And, I wonder if RCA paid for the "product placement" when the narrator mentions "six RCA television cameras." ;-)