NASA's MESSENGER spacecraft, which has been orbiting Mercury since 2011, has been spiraling closer and closer to the planet's surface. The spacecraft's orbit is slowly decaying, so mission planners must use frequent thruster burns to keep MESSENGER from diving to its eventual demise. One of the spacecraft's two fuel tanks is empty, and the second will be gone after a few more burns.

Right now, the spacecraft's periapsis—its closest approach to Mercury—brings it within 100 kilometers (62 miles) of the surface. By September 12, that number will shrink to 25 kilometers—just twice the altitude of a commercial plane. Thruster burns in September and October will keep MESSENGER higher than 25 kilometers, until it finally sinks to 15 kilometers in January. A final orbital boost will then exhaust the spacecraft's remaining fuel, setting up a crash landing around March 28, 2015.

This low-flying trajectory means MESSENGER is capturing some amazing close-up views of Mercury. On June 8, the spacecraft's Narrow Angle Camera (NAC) captured 214 oblique shots of the planet's north polar region as it traversed a swath of 980 kilometers (609 miles). The MESSENGER team assembled those frames into a video and sped them up by a factor of seven, creating a new birds-eye tour of our solar system's smallest planet. In the video, MESSENGER's altitude varies between 115 and 165 kilometers—about half the distance to the International Space Station.

For best results, set your YouTube video quality to 1080p, and watch the video full-screen.

This map shows the area of Mercury's north polar region that can be seen in the video. The two large craters that appear at 14 and 16 seconds are just north of Yoshikawa crater, and are among those believed to contain water ice. 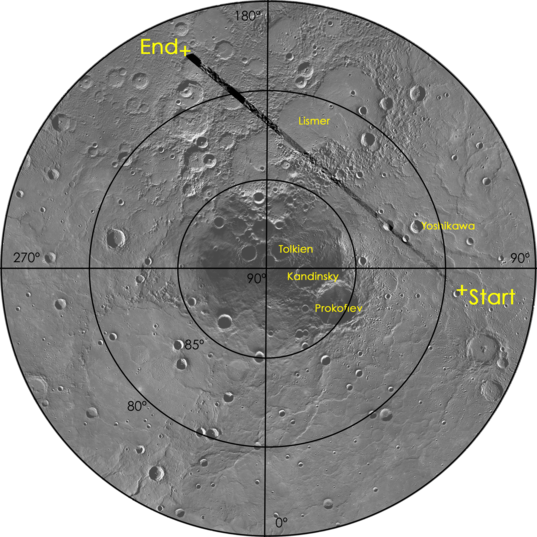 The dark swath represents the area MESSENGER covered during its June 8 flyover video.

That had to be some of the more rugged terrain on the planet. Do you know if they are going to be able to record the final decent as NASA did with Ranger back in the 'good ol' days' or not?