This Friday, SpaceX will attempt what no agency or company has done before: land a used rocket stage on a floating ocean platform. The effort will be made during the private spaceflight company's fifth paid cargo run to the International Space Station. Liftoff of the Falcon 9 rocket and Dragon spacecraft from Cape Canaveral Air Force Station Space Launch Complex 40 is scheduled for 1:22 p.m. EST (18:22 UTC).

Update: After problems arose during a pad engine test, liftoff has been delayed until at least Jan. 6.

SpaceX formally announced they would make the attempt Tuesday night, ending speculation that reached a fever pitch after a series of tweets by CEO Elon Musk on Nov. 22. After the Falcon 9 rocket's core stage separates from the launch vehicle, it will initiate a series of three engine burns to begin a controlled reentry back toward the Atlantic Ocean. The spent rocket will settle onto what SpaceX calls an "autonomous spaceport drone ship," an uncrewed sea barge with a landing pad. The odds of success that the Falcon will successfully land on the SpaceX logo-emblazoned barge are listed at just 50 percent. 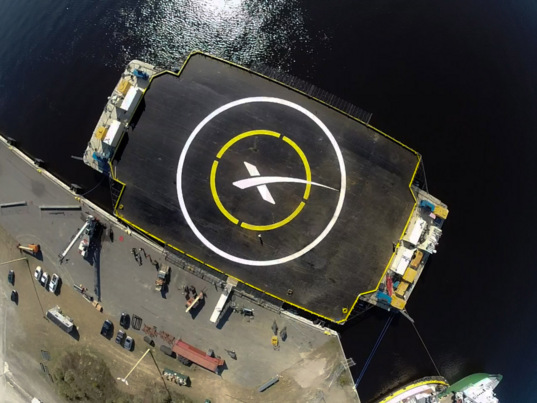 "Stabilizing the Falcon 9 first stage for reentry is like trying to balance a rubber broomstick on your hand in the middle of a wind storm," said the company in a statement. At core stage separation, the Falcon 9 will be traveling at about 1300 meters per second. After the rocket's upper stage and Dragon spacecraft are safely on their way to orbit, an initial engine burn will adjust the core stage's impact point.

Next, while the vehicle is still traveling faster than the speed of sound, a second burn—combined with atmospheric drag—will slow the plummeting rocket to 250 meters per second. Four gridded, movable fins stowed during launch will deploy outward into an "X-wing" formation. The fins move independently, controlling the rocket's roll, pitch and yaw. Combined with engine gimballing, the Falcon will steer toward the landing barge.

In the meantime, the autonomous spaceport will also be adjusting its position. Musk said the barge is equipped with thrusters repurposed from deep sea oil rigs, and is capable of holding a position accurate to three meters—even in a storm. A third and final engine burn will slow the falling Falcon to two meters per second. Four landing legs will allow the rocket to plunk safely onto the landing pad in an upright position. For this first attempt, SpaceX is aiming for an accuracy of about ten meters. The barge is about 90 meters long and comes equipped with wings that extend its width to 50 meters. The span of the Falcon's legs is 20 meters. 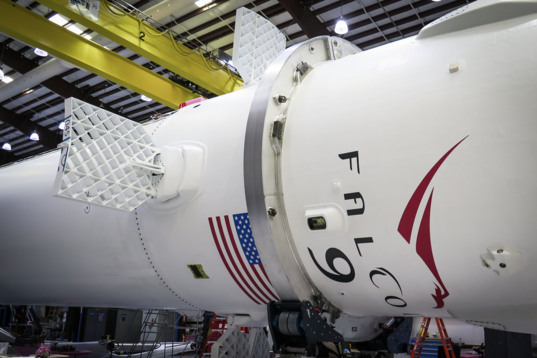 The Falcon 9 is equipped with gridded, movable fins stowed that deploy outward into an "X-wing" formation. The fins move independently, controlling the rocket's roll, pitch and yaw.

Building reusable rockets is one of SpaceX's charter goals. The company says reusability is "the key to making human life multi-planetary," and will drastically lower the cost of space access. At SpaceX's McGregor, Texas test facility, two vertical takeoff and landing demonstration rockets have already showed promising results. The first vehicle, dubbed Grasshopper, made a series of successful flights before being retired in 2013. A second rocket, the Falcon 9 Reusable Development Vehicle, or F9R Dev, began flying in 2014. The F9R Dev eventually flew as high as a kilometer, before an anomaly during an Aug. 22 test flight triggered the vehicle's self-destruct system. A second F9R Dev is reportedly under construction.

SpaceX has also gained experience in landing rocket stages during operational flights. In April 2014, a Falcon 9 core stage was successfully soft-landed upright in the Atlantic during the company's third paid ISS cargo run. In July, another Falcon stage repeated the feat after sending six communications satellites on their way toward space.

In July, a Falcon 9 core stage soft-landed in the ocean after sending six communications satellites on their way toward space.

NASA has taken an interest in SpaceX's efforts. During a Sept. space station mission, a NASA aircraft captured thermal video of a Falcon stage returning to Earth under powered flight. The data gained from the images is being analyzed to help characterize similar atmospheric entry conditions that spacecraft experience during Mars landings.

During a Sept. space station cargo run, a NASA aircraft captured video of a Falcon stage returning to Earth under powered flight using an infrared camera.

The barge makes me think of the concept; Space Elevator. I heard that Japan has devoted a huge sum of money to developing a space elevator. Do you have any news on this?