NASA's efforts to capture a near-Earth asteroid and tow it back to the lunar orbit will have to wait a little bit longer for a final mission concept. In a teleconference today, Associate Administrator Robert Lightfoot told reporters he needed more information before he could select one of two options NASA is considering for its Asteroid Redirect Mission (ARM). The decision is now expected to be made early next year, with a Mission Concept Review, or MCR, scheduled for late February.

"While I expected to make a decision today, we really got to the point where I needed to get some more clarification on some areas," Lightfoot said, confirming he met with two teams yesterday to discuss competing ARM concepts. "I've talked to the administrator (Charles Bolden) about it, and he agrees on the areas we need to go look into a little bit, and get a little more detail." Both ARM options involve capturing an asteroid or piece of an asteroid and towing it back to lunar orbit, where it will eventually be visited by astronauts in the early to mid-2020s. The baseline mission concept, Option A, involves capturing an entire asteroid or loosely bound rubble pile with a ten-meter inflatable bag. Option B would send a spacecraft to a larger asteroid between 100 and 500 meters wide, where it would pluck a small boulder off the surface. 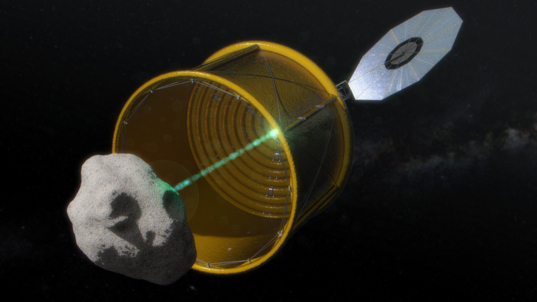 In Option A, NASA's ARM capture vehicle deploys an inflatable bag around an entire asteroid and redirects it into lunar orbit.

NASA has said as early as June that an ARM concept selection would be made this year. Lightfoot said that when he was presented with studies for both options, he considered a variety of factors, including mission complexity, guidance, navigation, and the level of autonomy required. "There was a lot of information there. The teams really worked hard to look at the different pieces," he said, adding that the groups challenged each other to address potential weaknesses and improve upon strengths.

The Asteroid Redirect Mission is touted by NASA as a way to test technologies that will be required to send humans to Mars. A leading mission proposal called the split mission concept involves staging heavy cargo in Martian orbit prior to a crewed visit. The cargo would be sent using large-scale Solar Electric Propulsion (SEP), with transit times between two and three years. ARM, says NASA, provides an opportunity to test vital SEP technology by pushing a large, heavy object through deep space. Additionally, a crewed visit to an asteroid in lunar orbit would require advanced EVA techniques that could be applicable to Mars missions. 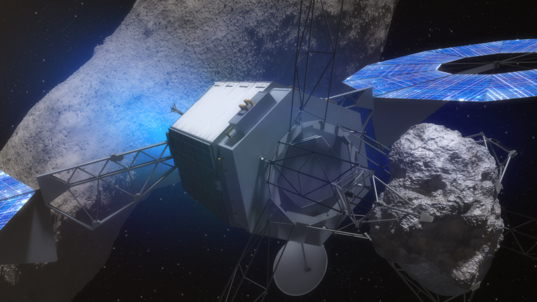 In ARM Option B, a robotic capture vehicle visits an asteroid 100 to 500 meters in diameter and removes a small boulder from the surface.

Lightfoot said Option B, the boulder concept, was more intriguing in terms of advancing future technologies. However, Option B is more complex because it requires the capture vehicle to land on a target asteroid before capturing its boulder. NASA expects both concepts to cost less than $1.25 billion, with Option B requiring an additional $100 million. Those mission costs do not include a launch vehicle. Lightfoot said possible rocket choices include NASA's Space Launch System, a United Launch Alliance Delta IV Heavy, or SpaceX's Falcon Heavy. Launch dates are expected to be evaluated during the Mission Concept Review. A crewed asteroid visit would take place using the NASA's Orion spacecraft, launched via the Space Launch System.

According to notes from a July 2014 meeting of the NASA Advisory Council, Chair Steve Squyres asked NASA's Deputy Associate Administrator for the Human Exploration and Operations Mission Directorate Greg Williams when an independent cost estimate for ARM would take place. "Williams replied that it would occur before the down-select," say the meeting notes.

If option A - feel free to use Goodstuff's cater for a space dock details - http://goodstuffsworld.blogspot.com/2012/09/goodstuff-lunar-squatting-declaration.html