Orion L-2 Report: The Old Gives Way to the New

Scattered clouds greeted the sun this morning as it rose over the Turning Basin here at NASA’s Kennedy Space Center. By mid-morning, rain was falling, and occasional light showers persisted throughout the afternoon. Nevertheless, NASA says there’s a good chance Orion’s maiden voyage will launch without a hitch Thursday morning. 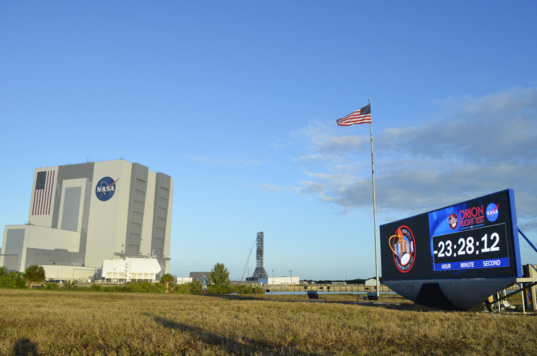 The iconic countdown clock at the Kennedy Space Center press site has received a digital upgrade.

At a press conference Tuesday afternoon, NASA officials said recovery vessels had already departed for Orion’s splashdown site, about 100 miles off the tip of Baja California. While the launch commit criteria for Orion is no different than any other Delta flight, ground controllers must also ensure the U.S. Navy has favorable conditions for recovery in the Pacific Ocean. A final weather briefing will be held before the Mobile Service Tower pulls back from the rocket tomorrow night, at which point fueling begins.

Meanwhile, at the nearby Vehicle Assembly Building, the whirr of power tools and beeps of heavy equipment filled the air. NASA is busy preparing its ground infrastructure for the Space Launch System, which will eventually send Orion into space. A brightly painted yellow crane being refurbished on the floor of the VAB clashed with dusty, shuttle-era infrastructure. 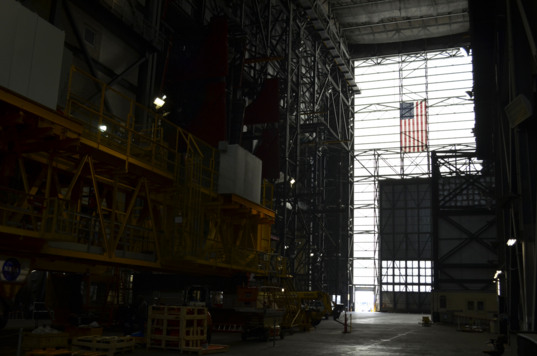 Unlike the space shuttle, the Space Launch System will evolve and change shape over time. As such, the VAB is being retooled into a dynamic facility with moveable access platforms. “The spacing between [the platforms] is going to have to change easily,” said Neil Berger, deputy project manager for the Vehicle Assembly Building. “We’re accommodating that by putting our platforms on a rail system so they can go up and down as needed.”

Outside the VAB sits the Mobile Launch Tower, slated to carry the Space Launch System to the pad. Its lower section has been covered with scaffolding. Construction workers scurry around, upgrading the tower from its Constellation-era roots. 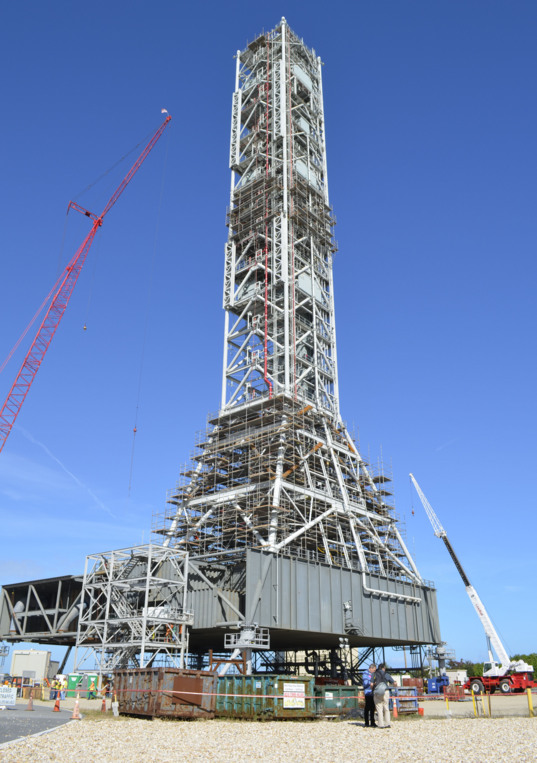 The Space Launch System Mobile Launch Tower sits covered in scaffolding, as work continues to upgrade it from its Constellation-era roots.

Back at the Turning Basin, a new countdown clock ticked away toward a mock Wednesday morning launch time. The iconic counter seen in television shots for decades is gone—replaced by a jumbotron-like board with graphics and a television feed.

For NASA, the old is giving way to the new—if ever so slowly.