Your Timeline of Events for Orion's Maiden Voyage

NASA’s Orion spacecraft is ready to embark on its maiden voyage this Thursday, Dec. 4. The mission’s two hour, 40 minute launch window opens at at 7:05 a.m. EST (12:05 UTC). I’ll be following along all week from Kennedy Space Center in Florida. Right now, the 45th Weather Squadron at Patrick Air Force Base shows a 40 percent chance that the launch will be pushed back 24 hours. Hopefully that will improve as we get closer to launch. If it doesn’t, retry attempts are already booked for Friday and Saturday.

Exploration Flight Test 1 (EFT-1) is a two-orbit shakedown cruise designed to test out Orion’s critical components—specifically, how the vehicle responds to radiation in the Van Allen belts, and how the heat shield fares under a fast reentry from beyond low-Earth orbit. While Orion’s eventual ride to space is the Space Launch System, EFT-1 will use a United Launch Alliance Delta IV Heavy rocket. The Delta IV Heavy will fly out of Launch Complex 37 at the Cape Canaveral Air Force Station.

Orion will be dropped into a preliminary, 185 by 888 kilometer orbit for a lap around the Earth. Then, the Delta IV’s second stage will re-ignite, kicking the spacecraft up to an altitude of 5,800 kilometers—higher than any human-rated spacecraft has been in more than 40 years. The unusual orbit will send Orion hurtling back into Earth’s atmosphere at speeds up to 32,000 kilometers per hour. Splashdown will take place off the coast of Baja California in the Pacific Ocean, where NASA and the U.S. Navy will haul the capsule into the flooded well deck of the U.S.S. Anchorage.

Below is a timeline of events for EFT-1, created in Google Drive using data from NASA’s official press kit. I added columns for EST and UTC times, and should be able to update the spreadsheet fairly easily if the launch is delayed or scrubbed.

You can also read more about the test flight here, learn why the Delta IV Heavy creates a fireball at liftoff here, and see how the U.S. Navy will pluck Orion from the Pacific Ocean here. 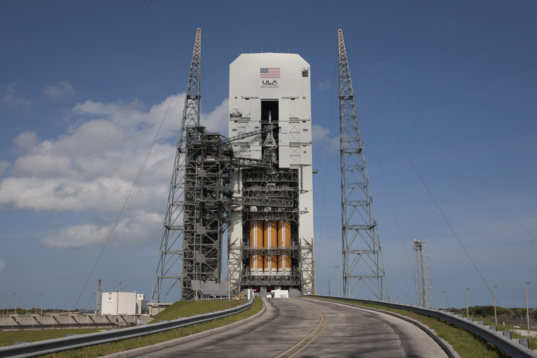 Orion at the pad