LightSail Gets Burn Wire Redesign for Round 2 of Vibration Tests

The Planetary Society's LightSail-A spacecraft is less than three weeks away from an expected go/no-go decision on whether the CubeSat will be launched into space for a shakedown cruise next year. Vibration tests in late October revealed a handful of problems that are being corrected. The most troubling of these was the spacecraft's solar panels, which managed to jiggle open on the shake table. A closer look by the LightSail team revealed the burn wire responsible for releasing the solar arrays was broken. To fix the problem, Ecliptic Enterprises Corporation created a new burn wire design. Tests of the new design are already underway. If all goes well, LightSail-A will go back into vibration testing later next week, and stay on target for delivery to Cal Poly in early December. 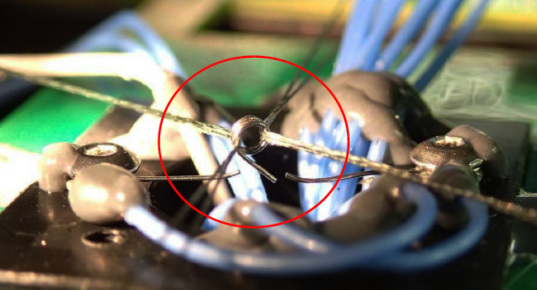 Each of LightSail's four solar panels are hinged on one side. Left untethered, they swing open into the deployed state you've seen in artist's concepts and testing videos. During LightSail's ride to space—as well as the on-orbit phase of the mission prior to sail deployment—the panels are held shut by a fishing line-like material called spectraline. The spectraline feeds through a small coil of Nickel-Chromium called a burn wire. When it's time for solar panel deployment, the burn wire gets a jolt of power—about 2 amps. The wire quickly heats up, and in just one second, it's hot enough to burn through the spectraline. The solar panels are free, and swing open into space.

Currently, each solar panel is tied to an adjacent panel, with the spectraline pulled tightly against the burn wire. Thus, when LightSail shakes violently during vibration testing (or during its eventual ride to orbit), the brunt of the force from the spectraline is sent into the burn wire itself. During testing, this caused the burn wire to break, which would be catastrophic during flight. Without the burn wire, the panels—and thus, the solar sails—would never deploy. 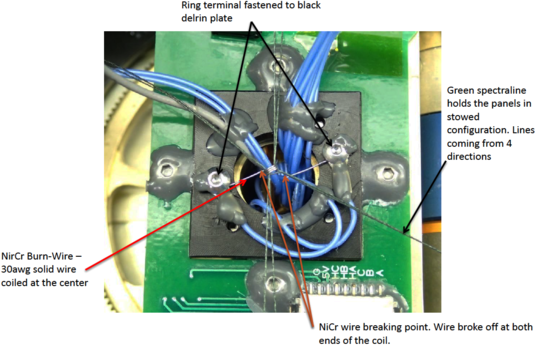 LightSail's current burn wire configuration, in which each solar panel is tied to an adjacent panel.

Ecliptic created a new design in which each panel is tied to its opposite (rather than adjacent) panel, reducing the amount of force on the burn wire. The thickness of the wire, which is currently 30 gauge, is being increased to 24 gauge. Finally, the wire is being bonded to the spacecraft with additional epoxy. 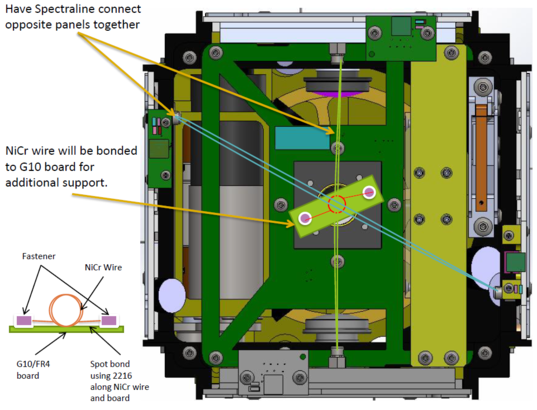 LightSail's new burn wire configuration, in which each solar panel is tied to an opposite, rather than adjacent, panel.

Riki Munakata of Ecliptic said the new configuration is currently being tested on a mockup structure, pictured here: 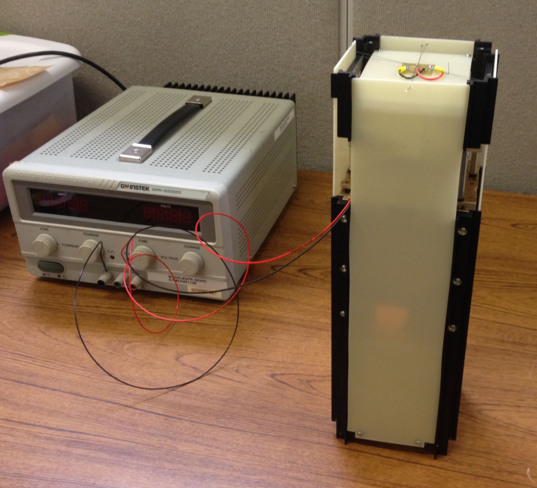 A mockup of LightSail, prepped for burn wire testing

Next week, the Ecliptic team hopes to implement the new design on the flight unit. They will take the spacecraft from Pasadena back to Cal Poly for another vibration test. After that, LightSail makes a trip through the thermal vacuum chamber.

And if all that works? Cal Poly will take the spacecraft and integrate it for launch. Stay tuned.

I'm not sure increasing the wire gauge will help, and may actually hurt. I am surprised that the wire broke where it did, indicating nicks or bending stress-risers may have been added when it was formed. The wire should also be attached using soldered or welded ring terminals. NEVER use crimp-type terminals in a high-vibration environment as this creates stress-risers at the connection. It wouldn't hurt to have the wire assembly electro-polished after formed and the rings attached as this can relieve overall stresses and eliminate even microscopic stress-riser points.

Another thought that occurs to me is that if the burn-wire that broke had been heated and cooled repeatedly during testing, the break points probably correspond to the boundary locations that the heat-treatment reduced the ductility. BTW, the reason I suggested electro-polishing is that it has been shown to greatly improve the life of springs, so if you can't otherwise eliminate vibration induced movement, this is a potential way to help postpone fatigue-type failures.

I was wondering if Ecliptic has their own shake table that they can use before sending the S/C back for flight testing.

If they also have high speed imaging capability they may be able to see the extent of the vibration then reexamine the wiring for any obvious signs of stress. Sure microscopic stress levels will take additional equipment and I know time is not on our side. At least we found these problems now and not learned of them on orbit.

Have you tried to listen to the tightly pulled spectraline. Try to play guitar with it and listen what the resonance frequency is. This might help to know when the strongest movement occurs.

Hi all, I wanted to let you know that the team does read your comments. I'm not qualified to evaluate the merits of each idea, and there's usually more depth to the situation than I'm able to convey, but the team does like to hear your thoughts. RobB, the higher gauge wire ended up not working because it lengthened the burn-through time to about 15 seconds (nominal is about 1 sec), thus increasing power draw. They've changed the coil design and are having success with initial tests. Bob, I'm not sure if Ecliptic has a shake table, but they do flight hardware testing at Cal Poly, which is just a couple hours north. Jason