There were smiles, laughs and sighs of relief on the campus of Cal Poly San Luis Obispo last night, as The Planetary Society’s LightSail spacecraft unfurled its solar sails and passed a major systems test. The so-called day-in-the-life test demonstrated LightSail can autonomously perform its key functions in space, starting from the moment the spacecraft is ejected from its P-POD (Poly Picosatellite Orbital Deployer). While there is still much work to be done before the team decides whether or not to send LightSail-A on a 2015 shakedown flight, Tuesday’s test sent the spacecraft over a big project hurdle—and gave the team a much-needed morale boost.

LightSail's solar sails deploy during spacecraft testing at Cal Poly San Luis Obispo on Sept. 23. For testing purposes, the sail booms were only extended to 90 percent of their full length. They were then incrementally extended so engineers could measure sail tension and record the correct number of deployment motor revolutions.

The day-in-the-life test took LightSail-A through an accelerated version of its flight autosequence. When a CubeSat is nestled in its P-POD, a series of switches are held in place that prevent the spacecraft from powering up. As the CubeSat springs loose, these switches release, turning on the spacecraft and booting its flight software. In LightSail's case, this kicks off a timed sequence that includes de-tumbling, antenna deployment, telemetry transmission, and eventually, sail deployment. For testing purposes, the time intervals between these events were artificially shortened.

The first part of the test took place in Cal Poly’s clean room. The autosequence properly deployed LightSail's antenna and began sending telemetry to the Cal Poly ground station. The folks at Cal Poly have a cool web interface that decodes telemetry packets into human-readable text in real-time. There's even a radio system near the clean room that emits audible static blips as data packets come in. LightSail's onboard cameras automatically snapped test images, which were received by the ground station. Finally, the burn wires holding the solar arrays together heated through, and the panels swung open, revealing the sail.

The LightSail spacecraft's antenna and solar array deploy during spacecraft testing at Cal Poly San Luis Obispo on Sept. 23. The antenna deployment was shot at 60 frames per second, and the replay was slowed to 3 percent of normal speed.

Just before the solar sails were scheduled to deploy, power to the spacecraft was cut off so it could be transported to its large, portable sail deployment table in the neighboring Bonderson Projects Center. The power was re-enabled, and the auto-sequence picked up where it left off.

But as is typical for LightSail, there was some last-minute drama. When the autosequence commanded the sails to deploy, nothing happened. By then, the room was packed with students, reporters and curious bystanders—and it was eerily quiet with anticipation. The LightSail team quickly analyzed the situation, and commanded the spacecraft to re-initialize its auto-sequence.

This time, LightSail's deployment motor whirred to life, extending the spacecraft's four, tape measure-like booms. The booms slowly peeled the sails out of their storage cavities.  The autosequence was programmed to stop the booms about 10 percent shy of their full length, so that the sails could be visually examined before proceeding. The sails performed remarkably well, despite concerns that their prolonged stint in storage might have caused sticking. Finally, the booms were extended in small increments so the team could monitor sail tension and record the correct number of motor revolutions required to deploy the sails in space. All of this was done with commands sent to the spacecraft through the Cal Poly ground station. Throughout the test, LightSail sat proudly alone in the center of its deployment table, running solely on its internal batteries. 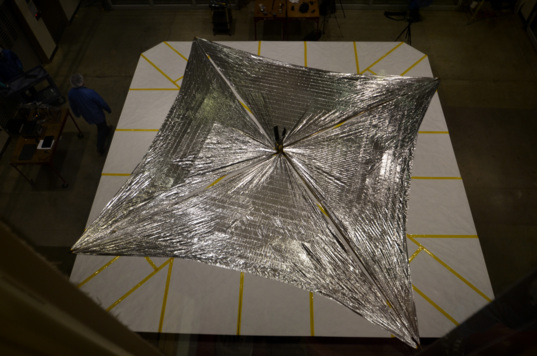 The LightSail team spent many long nights getting the spacecraft to this point. They’ve faced numerous setbacks and have overcome a barrage of challenges. It's a small, close-knit group that never seems to let a problem get them down. This week, Riki Munakata and Alex Diaz seemed permanently hunched over LightSail in the clean room. Software guru Barbara Plante devoted her weekend to hunting down a bug that turned out to be a file path problem. Justin Foley and the Cal Poly staff supported the team from early mornings to late nights. Mike Patton waited patiently for the sails to finally deploy Tuesday evening so he could help with refolding. And project manager Doug Stetson gave guidance when needed, while also knowing when to give his team space to focus.

Mostly buried in the day-in-the-life test excitement was the fact that LightSail's radio is working superbly, having been the main problem that stymied the project for the previous month. Here's a breakdown of those problems, and how they were resolved.

One of the main reasons for scrubbing LightSail’s previous day-in-the-life test was an unexpected battery power draw by the radio system. A normal power draw is 3 to 5 watts, but in some cases, that number was shooting up to 12 watts—which was placing the spacecraft in danger.

Or so the team thought. The battery packs for both LightSail-A and BenchSat—the engineering test unit—use battery monitors to measure voltage, current and temperature for each cell.  The current draw is calculated by measuring the voltage change across a resistor on the battery pack. In the case of BenchSat, the resistor is a 25 milliohm fixed resistor located inside the battery pack. And since BenchSat is a nearly identical copy of the flight unit, LightSail-A's current was measured under the assumption that its battery monitor also used a 25 milliohm resistor.

Not so. During the past several years, LightSail and BenchSat have been through a long, often tumultuous journey to get where they are today. As a result, detailed change management documentation doesn't always exist.

So as it turns out, LightSail-A’s battery monitor uses a 100 milliohm resistor. Upon discovering the discrepancy, the team reviewed their data, recalculated the current draw, and discovered their initial measurements were off by a factor of four. LightSail-A's radio has actually been pulling the correct amount of current all along. It was a welcome discovery and an easy fix—a simple software adjustment was made to update the battery monitor.

That still didn’t explain why LightSail-A’s radio was only transmitting at a fourth of a watt. During a my last LightSail update, I said that the spacecraft had been taken to Tyvak Nano-Satellite Systems for an in-depth diagnosis. There, Diaz and Munakata removed the spacecraft's radio system and tested it with an external power supply. Surprisingly, it transmitted normally at a full watt.

After considering such a puzzling result, they carefully put the spacecraft back together, testing the radio at each step. When they installed LightSail’s top circuit board, which contains the zenith-facing solar panels, the problem reappeared. They had found a culprit.

The top board connects to the spacecraft's main avionics board, which, in turn, connects to the radio system. Diaz and Munakata started testing the individual connector pins on the avionics board. They discovered that when the top board was plugged in, a pin that turns the radio amplifier on and off was grounding. After discussing the situation with Tyvak, Diaz and Munakata removed the pin, and the radio began transmitting at a full watt.

In the process of troubleshooting the radio system, the team discovered LightSail's antenna was not properly matched—that is, it wasn’t efficiently funneling power out the spacecraft in the form of radio signals. An analysis by Tyvak determined the antenna mismatch wasn’t the sole cause of the low power output, but it certainly wasn’t helping the situation.

The team saw an opportunity to improve LightSail’s performance, so they took it. Diaz took LightSail-A to an anechoic chamber at Cal Poly. An anechoic chamber is a room padded with surfaces designed to absorb sound and electromagnetic waves. It's the best place to measure and understand exactly how a spacecraft’s radio system is performing.

At the anechoic chamber, Diaz attached an extra long, gold-plated antenna to the spacecraft. He monitored the radio output with a vector network analyzer, and began trimming the antenna. After two days of work, he determined an 8-inch antenna resulted in the best performance. LightSail’s actual antenna length is 7.25 inches. Rather than fly the longer antenna, the team opted to install a "matching network," which consists of a capacitor and inductor placed next to the antenna. The matching network greatly improved LightSail’s radio’s performance. 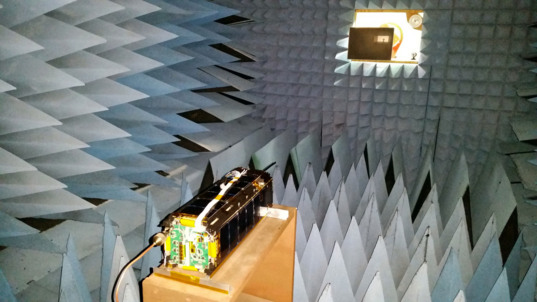 LightSail in the anechoic chamber

The LightSail 1 spacecraft sits in an anechoic chamber at Cal Poly during antenna impedance tuning.

After Tuesday’s test, the team worked late into the night refolding the spacecraft’s sails and integrating them back into the spacecraft. They retracted the sail booms, stowed the antenna and closed the solar panels. The team will analyze the results from the test and address any glitches. LightSail's next major challenge will be a trip through Cal Poly's Thermal Vaccuum Chamber (TVAC), where it will be subjected to a harsh, space-like environment.

Loren Roberts and I were able to capture a lot of great footage over three days of Cal Poly testing. I’ll be working to organize more of that and get it posted. I’m also hoping to post some sample telemetry from the spacecraft, as well as onboard camera images captured during the sail deployment. We're also just about ready to debut our all-new LightSail website! More from the project is coming soon.

Congratulations to our LightSail team achieving this important milestone toward flight.

Excellent news. Has anyone tested to see how much multi-pathing there is going to be off that big reflector (solar sail)? Are the uplink and downlink packet lengths at the lowest telemetry rates short enough to get through between possible nulls as the geometry changes with respect to the ground stations? It sounds like there is a good team there, properly working their way through anomalies. I hope to look up soon and show my five-year old what a glinting solar sail looks like.