Emily is on vacation for two weeks, so I’ve been filling in as the blog editor. I promised to cover any breaking news on her usual beats. One of her requests was to watch for new pictures from Rosetta, the European Space Agency spacecraft closing in on comet 67P/Churyumov-Gerasimenko. This morning, the folks over at the ESA Rosetta blog posted this:

This animation of Comet 67P/Churyumov–Gerasimenko was created from 36 images captured by Rosetta on June 27 and 28. The comet makes a revolution every 12.4 hours.

The animation of comet 67P’s nucleus was made from 36 images snapped on June 27 and 28. It’s hard to see, but the comet is spinning. It makes a full rotation every 12.4 hours. At the time, Rosetta was about 86,000 kilometers (53,000 miles) away. That’s just a fifth of the moon's average distance to Earth. The spacecraft is closing fast—today it’s just 43,000 kilometers away, and by Monday it will be closer than our satellites in geostationary orbit.

Is the smudgy appearance of 67P caused by its coma? No, writes Emily Baldwin on the European Space Agency’s Rosetta Blog:

The comet appears – as expected – rather fuzzy from this distance and seemingly covers a slightly larger area than two by two pixels. This is due to the physical effects of the way light is spread inside the imaging system, and is not associated with the comet displaying a coma, for example.

Rosetta has five more rendezvous burns to do before it arrives at comet 67P/Churyumov-Gerasimenko on August 6. 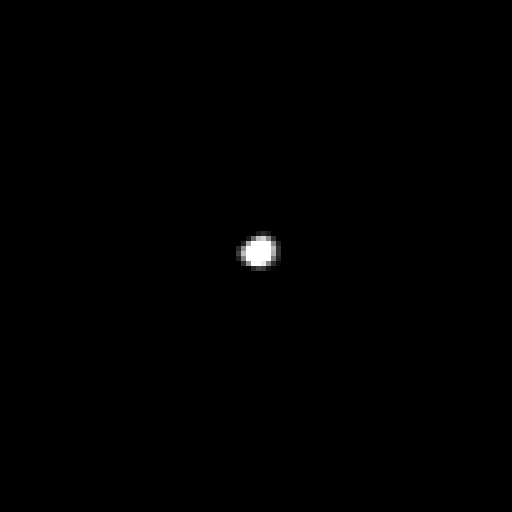 Rosetta’s OSIRIS narrow-angle camera captured an image of Comet 67P/Churyumov–Gerasimenko on June 28, 2014. The comet covers an area of about four pixels.