A spacewalk outside the International Space Station Tuesday ended early after a water leak inside European Space Agency astronaut Luca Parmitano’s helmet created a potentially dangerous situation. An hour into the spacewalk, Parmitano reported water pooling around the back of his head. He and NASA astronaut Chris Cassidy investigated the problem, speculating the water might have been leaking from Parmitano’s drink bag.

Although Parmitano was not in immediate danger, flight director David Korth sent Parmitano back to the Quest airlock while Cassidy cleaned up the duo’s gear. As Parmitano headed inside, water began to pool around his eyes and ears, causing him to have difficulty seeing and hearing. Cassidy reentered the station next, and the airlock was repressurized. 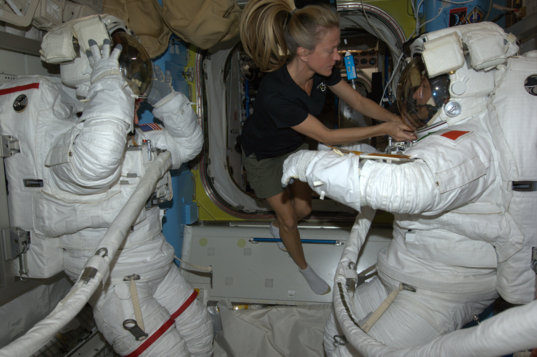 NASA astronaut Karen Nyberg and cosmonauts Pavel Vinogradov and Fyodor Yurchikhin were on hand to immediately remove Parmitano’s helmet and soak up the water with towels. The Italian spacewalker appeared to be in good spirits.

Parmitano and Cassidy were continuing work they began during last week’s EVA, which included preparation for the arrival of Nauka, Russia’s new Multipurpose Laboratory Module (MLM). Nauka is scheduled for launch in late 2013, but after its ride to orbit—a Proton rocket—crashed shortly after liftoff on July 2, the timeframe is less certain.

NASA says mission managers are working to identify the cause of Parmitano’s water leak, and will investigate options for rescheduling work outside the orbiting laboratory.