A Russian Proton-M rocket carrying three navigation satellites veered off course after liftoff and crashed in a nearby field, exploding in a dramatic fireball. The launch and accident occurred near Baikonur, Kazahkstan, at the same facility Russia uses to launch Soyuz rockets to the International Space Station. No casualties were reported, and though there were initial concerns over a resulting toxic cloud heading for Baikonur, a heavy rain dispersed the fumes.

Here is the jaw-dropping video from Russia 24:

Amateur footage of the crash has also been popping up on YouTube:

Russian space agency Roscosmos says engine cuttoff occurred 17 seconds into flight, and impact occured approximately 2.5 kilometers from the launch pad. The cause of the crash has not been released, but a dark plume can be seen near the engines as the rocket starts to wobble during its ascent. The payload was three GLONASS global navigation satellites valued around $200 million.

A couple of interesting things that caught my eye: notice how the fairing and payload are the first parts of the rocket to fail under the aerodynamic stress. The way they are ripped from the Proton reminds me of what happened to GOES-G in 1986 when its Delta II rocket lost an engine on the way to space. Also, notice how the vehicle begins to spin as it loses control. According to SpaceflightNow, Russian rockets do not carry range safety systems like Western rockets. That may explain why it was allowed to violently impact the ground. 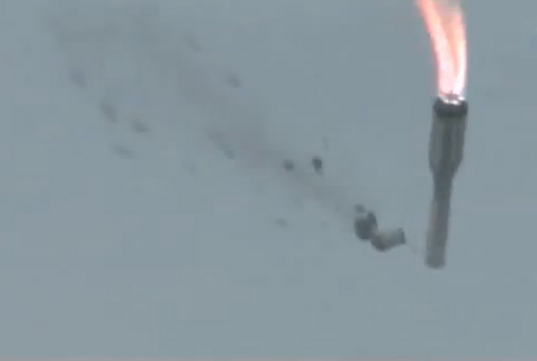 Just a couple of comments. The dark plume is normal for Proton launches. The problem appears to involve the guidance system, and I wonder if it is anything like what cripple a Zenit 3SL (SeaLaunch) rocket in late January this year. The Failure Review Oversight Board attributed that to the "1st stage hydraulic power supply unit (BIM) with no other contributors identified."

Looking at the images of, what little footage there is, the LV appears to have maintained full thrust. It also spun up quite rapidly possibly indicating a thrusting leak somewhere. What is that dark plume? Hydraulic fluid? I've not really noticed that before nor have I seen many Proton launches either. Is there any other video? I've seen some of the Youtube videos but they lost the LV at good moments of viewing. What was caught was good. I'll keep looking.