The launch was California-based because IRIS flies in a polar, sun-synchronous orbit of 97.89 degrees. Its altitude varies from 620 to 670 kilometers, roughly double that of the International Space Station.

IRIS will attempt to demystify a counterintuitive observation about the sun’s atmosphere: the outer regions are hotter than the inner regions. Imagine yourself standing in front of a roaring fireplace—as you back away from the flames, you should feel less heat, right? Not so in the sun’s atmosphere.

The sun’s surface (we use the term lightly, since the sun is a burning ball of gas) is called the photosphere. This is where we see sunspots, the comparatively darker blobs you can see through a standard white-light solar filter. The temperature here is a toasty 6,000 degrees Kelvin.

Above the photosphere is the chromosphere. Here, the temperature increases from 6,000 to 20,000 K in a distance of just 1,700 kilometers. This is where solar prominences—massive, looping strands of burning gas—get their start.

Next comes a thin, irregular zone called the transition region. The transition region is a bridge between the chromosphere and the corona, the outer atmosphere of the sun you can see in pretty pictures of solar eclipses. The corona’s temperature tops a million K.

So what’s happening in the chromosphere and transition region that causes such a dramatic rise in temperature? That’s the question scientists want IRIS to help answer. The spacecraft has a single instrument: an eight-inch telescope that can observe ultraviolet light at temperatures ranging from 5,000 to 10 million K. It does this with a dielectric multilayer telescope mirror. I won’t claim to be an expert on the specifics (you can geek out on the technical specifications in this PDF), but basically, the majority of incoming light passes right through the mirror into a heat sink, while ultraviolet light is reflected into the spacecraft’s guts for analysis.

That analysis is done with a spectrograph, which splits light into its component wavelengths the way a prism creates a rainbow (thus, the Pink Floyd-esque mission logo). The resulting spectra can reveal a lot about the material the telescope is observing—details like density, temperature and velocity. And that’s the key to learning more about the complex processes occurring in the sun’s atmosphere. 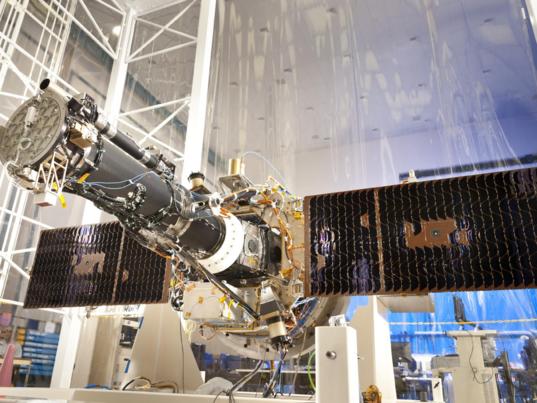 IRIS is a Small Explorer Mission, which means it has a price tag less than $120 million. But that’s no excuse for it not have a Twitter account! I say that if a rubber chicken gets to tweet, surely an ultraviolet telescope can.

Hi Jason I wonder if the corona temperature puzzle is related to our concept of temperature. In effect temperature is a measure of the random collisions between particles. Traditionally temperatures increase when the particles are forced closer together (compressed) or move faster (heated). But this assumes that the direction of motion is random. What if all the velocities are aligned? This would reduce the number of collisions and lower the observed temperature. More radically, what if half the particles moved in the opposite direction like the LHC? Would this cause the observed temperature to skyrocket?