What would Earth's skies look like with Saturn's rings?

Illustrator and author Ron Miller specializes in, among other things, incredible visualizations of other worlds. He has rendered the surface of Titan, peered into black holes for Discover magazine, and designed a Pluto stamp that is currently hurtling toward the far reaches of our solar system aboard the New Horizons spacecraft.

Now, Miller brings his visualizations back to Earth for a series exploring what our skies would look like with Saturn’s majestic rings. Miller strived to make the images scientifically accurate, adding nice touches like orange-pink shadows resulting from sunlight passing through the Earth’s atmosphere. He also shows the rings from a variety of latitudes and landscapes, from the U.S. Capitol building to Mayan ruins in Guatemala.

We'll start with Washington, D.C. and work our way southward. 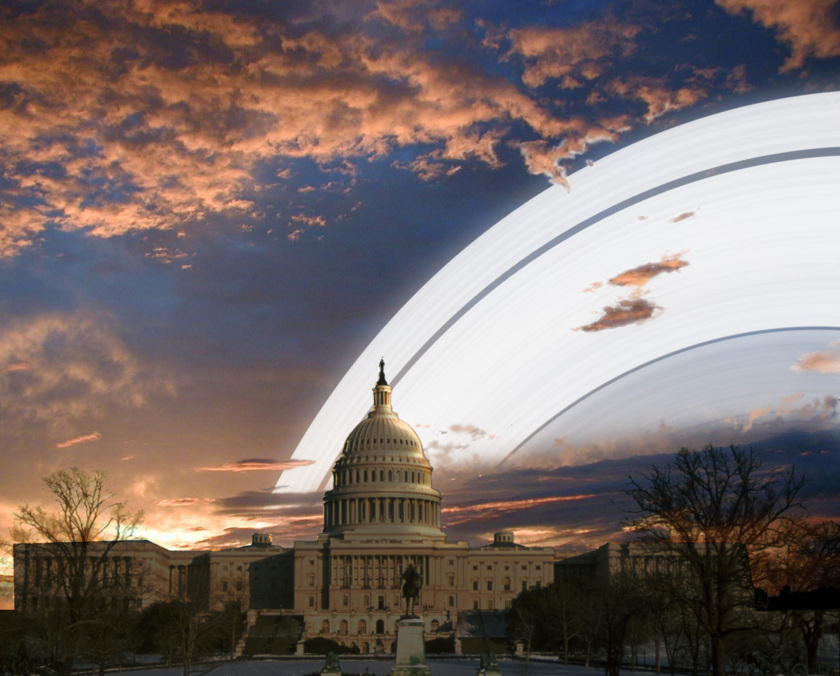 From Washington, D.C., the rings would only fill a portion of the sky, but appear striking nonetheless. Here, we see them at sunrise. 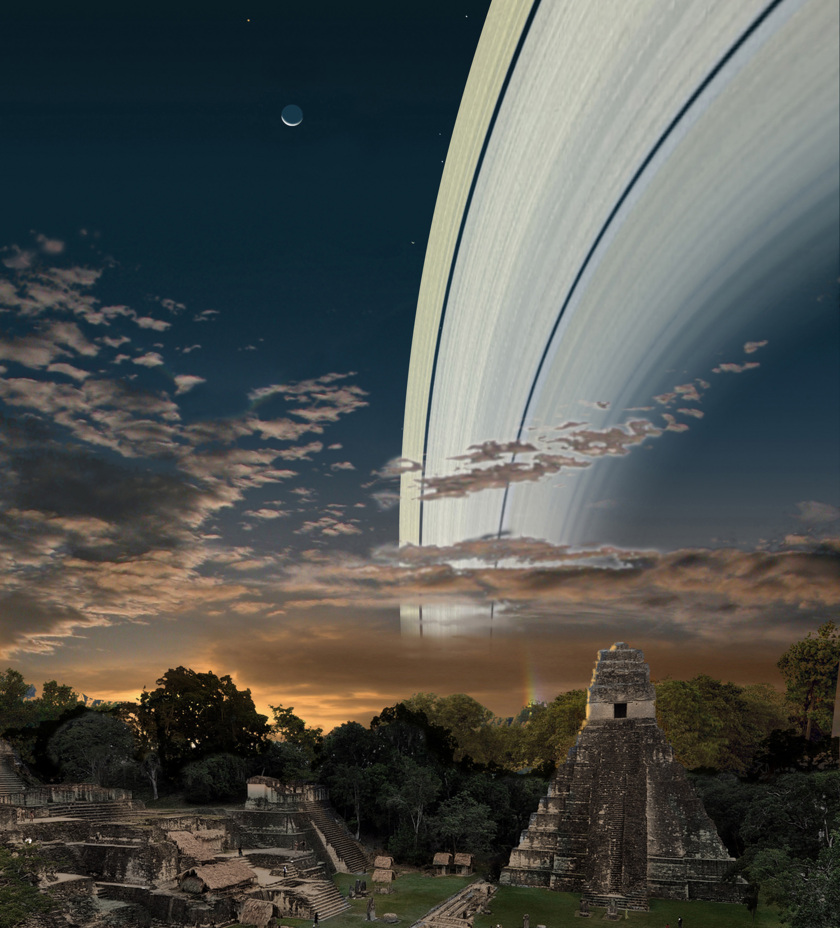 From Guatemala, only 14 degrees above the equator, the rings would begin to stretch across the horizon. Their reflected light would make the moon much brighter. 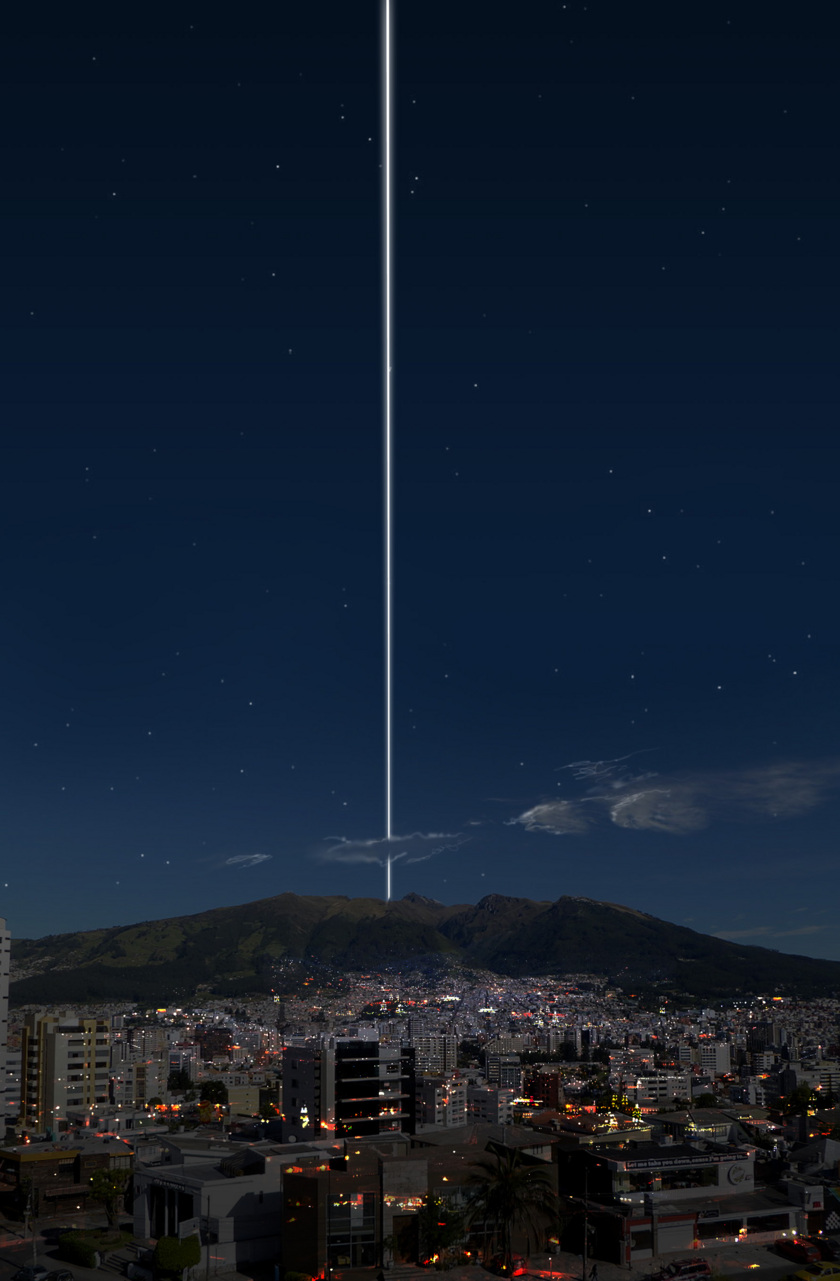 From Earth's equator, Saturn's rings would be viewed edge-on, appearing as a thin, bright line bisecting the sky. 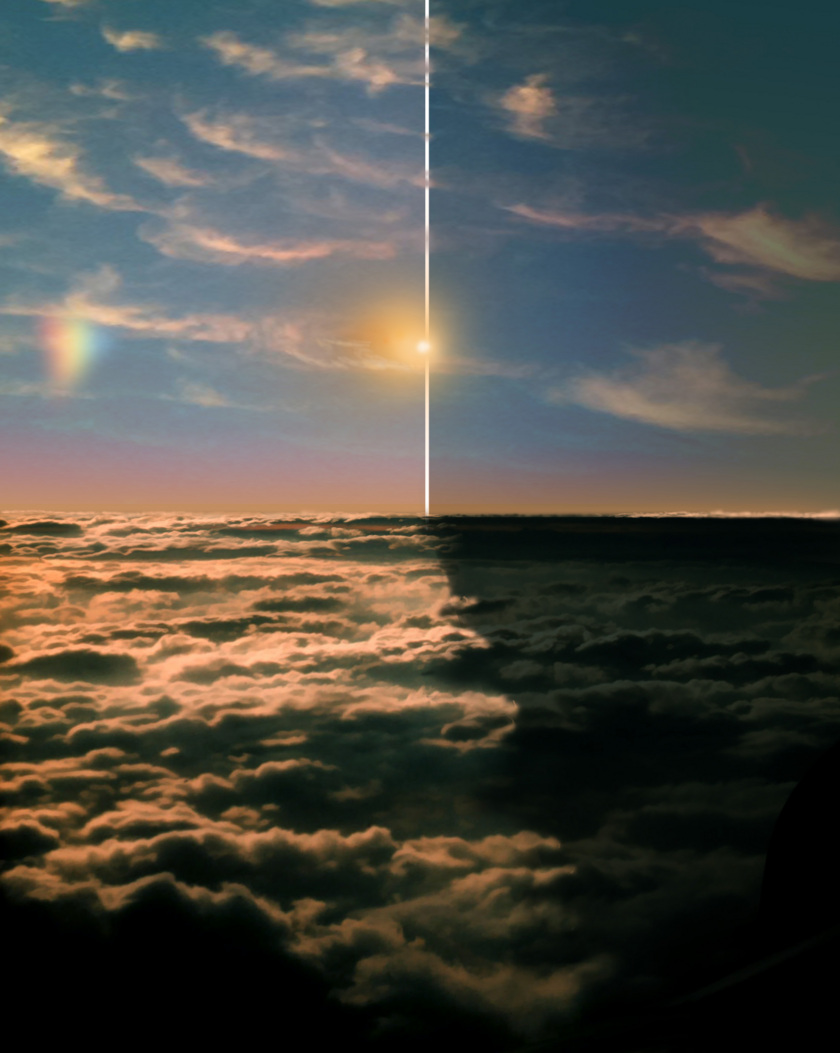 Equinox at the equator

At the March and September equinoxes, the Sun would be positioned directly over the rings, casting a dramatic shadow at the equator.

At midnight at the Tropic of Capricorn, which sits at 23 degrees south latitude, the Earth casts a shadow over the middle of the rings, while the outer portions remain lit.

Note: Ron Miller has graciously allowed us to repost these images. They are copyrighted, and any further use requires his permission.

Oh yeah, cool for sure!; echoing Z's words. Also, thinking about these equatorial rings maks one realize you really are on a ball thus on your side! Especially since I lived in the NOVA (N. Va. / DC area!

I see the rings run through the sting of Scorpius in the equatorial picture, so I guess the they've played havoc with the tilt of Earth's axis...

Please your opinion : The rings around the Earth . It may be ring shaped balls? I think the shape of the shell over the entire surface of the planet. Water from the country came up. Maintained at a height in the form of ice , never crash, as the ISS . Man Noe , from the book of the Bible. As it says in the Bible , when he saw a rainbow , it was something special. I believe that the rainbow he saw for the first time in my life . On this first seen until after the world flood. Planet Earth could have a coat formed by chunks of ice? Led by strong frost has a different form than we know from the kitchen. Could there be a rainbow in space where light passes through a prism of pure ice? Ice packaging can have on the planet earth this effect : I can see the sun and the moon but can not see the stars ( precisely describes the Bible ) . There is never completely dark . Ice jacket is very heavy, and has its own gravitational force that weakens the gravity of Earth. I note that some elements of gravity acts in a special way . For example, frozen helium escapes from the container. Climate change . According to the Bible , before the flood never been rain, only from the ground based vapor. No storm or gale . Warm sunlight ( as warm as you can feel behind the glass when the sun is shining outside ) . Less earthquakes. My question : When light passes through the ice , still can then create a rainbow ? If not, it is a proof that the Bible is right. Thank you for your response . Your Filip JW ftomek@centrum.cz

I disagree in stating it as Saturn's rings which are ecliptic while his drawings are equatorial. The shadows are not required by the sun at the ecliptic point, for everyone at every latitude the rings themselves would widen to full view yet narrow to their edge where equator crosses ecliptic

I study the Bible Genesis to understand the 83-year cycle of Jupiter whose 84 years of 360-day do not drift forward a year until Abram's 427 years, and Solomon's temple of 427 years. I also study the 205-year Mars of Abram's father Terah (208-year of 360-day) and the Semiramis Venus of a sidereal 235 years Sothic Julian 243 years and seasonal Shem-Ramis of 251 years, as well as how the 1200 year Venus is not Jupiter. So quite versed in ancient chronology that unveils whether modern astronomy has drifted or not. Currently studying Mars to see how it passed from Ur to Babel to Nineveh to Harran Syria to Mari Syria and was kept by the Mayan thru Harappa India, Xian China, Korea and Japan upon their arrival in Copan in 1313bc. Armageddonist here, as in Noah's asteroid Flood, global comet armageddon exodus (not just Jews in Egypt), and the asteroid about to strike soon.

Thank you very much, this was really useful! I've linked your work to be used as a reference in my article about rings - https://alkony.enerla.net/english/nexus-projects/alkony-english/alkony-setting/alkony-the-sky-above-the-inland-sea