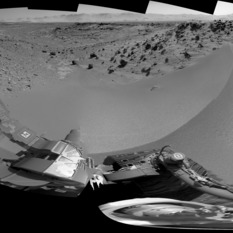 While continuing to perform regular wheel health assessments, Curiosity took a sharp right turn and headed for Dingo Gap. On sol 533, they performed a "toe dip" that parked the rover atop the dune with a good view down into the valley. 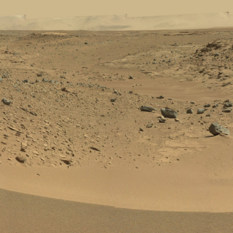 Beautiful view into the valley beyond Dingo Gap, Curiosity sol 528

A beautiful Mastcam panorama from sol 528 shows a landscape so much more like Earth than anything we've explored on the Martian surface before. 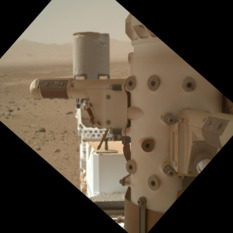 At long last, on sol 526, Curiosity imaged the part of the weather instrument that was damaged during landing, but no obvious damage is visible, to me anyway. On sol 527 they drove even closer to Dingo Gap, with plans to drive onto the dune in the sol 528 drive. 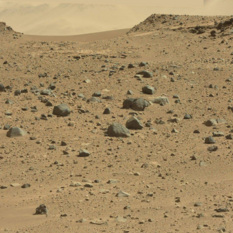 Over the last few days, Curiosity made steady driving progress to the southwest. For several of those days, an intriguing feature has appeared on the horizon in her images. UPDATE: The Curiosity team has now decided to drive the rover toward the feature, which is now named "Dingo Gap." 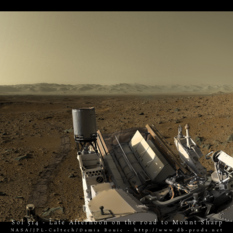 In the last month, Curiosity put 222 meters on the odometer in 12 short drives, while regularly assessing the wheels for damage. The rover performed touch-and-go analyses of rocks including Oneida and Kodak, and also took some ChemCam RMI mosaics of rocks near the base of Mount Sharp.