MESSENGER is on target for its January Mercury flyby

MESSENGER is on target for its January Mercury flyby 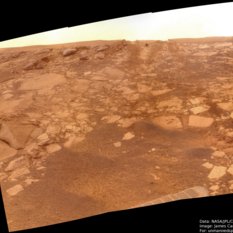 The Mars Exploration Rovers have left wheel tracks all over their landing sites, but for some reason this pair of wheel tracks, left in the sand ripple on the rim of Victoria crater and now viewed from below, tickled my fancy. Thanks to James Canvin for the lovely panorama.

Kaguya: both mini-satellites deployed and renamed

Kaguya: both mini-satellites deployed and renamed

DPS: What's next with NEO searches

DPS: What's next with NEO searches