This post originally appeared on Van Kane's blog and is reposted here with permission.

As I'm sure many of you already know, NASA has canceled the launch of the Mars InSight geophysical mission because of problems with its prime instrument, the seismometer. Casey Dreier with the Planetary Society has a good description of the problem and why NASA's managers decided not to proceed with the planned launch in March. 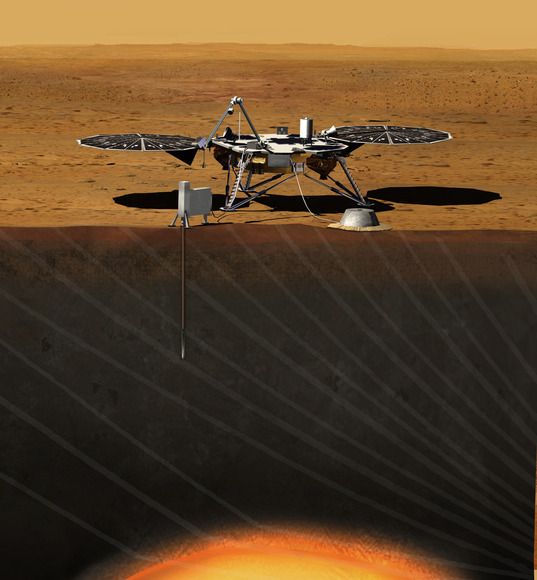 Artist's concept of the InSight lander on Mars.

Deciding not to proceed with the launch just three months away will likely prove to be the toughest or one of the toughest decisions these managers will make in their careers. I also believe they made the right decision. Hail Mary passes make for good football but terrible management of space missions.

So how might this affect NASA's planetary program? The answer breaks into three parts.

In the short term, there are three immediate steps. The spacecraft will be returned to its manufacturer—Lockheed Martin—for storage. The French space agency, which is supplying the seismometer, will work to fix the problems to enable the possibility of a future launch. And the launch vehicle will need to be stored or assigned to launch another spacecraft.

In the intermediate term, NASA's managers must decide whether to launch the mission 26 months later in 2018 when Mars and Earth again align or cancel the mission. The InSight mission is funded through NASA's Discovery program, which imposes strict cost caps on missions. The costs of storing the spacecraft and then retesting it prior to a later launch very likely will bust those caps. NASA's regulations require a formal review of whether or not to delay the mission or cancel it.

For the longer term, InSight's problems could have two effects on the pace of future Discovery missions. If the mission is canceled, there are no additional costs associated with it and almost $150M in future InSight costs are avoided. Five proposed missions are currently being evaluated for selection in approximately nine months. NASA's managers have stated that they would like to select two of those missions if they possibly can. If InSight is canceled, then NASA has additional funds to apply to the next next mission or missions selected next September.

If NASA decides not to cancel InSight, then the space agency will have new costs associated with the storage and later recommissioning of the spacecraft and possibly higher costs for the launch. In addition, the costs of operating the mission will be pushed forward into 2018 to 2020 when the peak funding for the development of the next Discovery missions is required. (NASA can't simply bank the money it would have spent on InSight from 2016 to 2018. That money would either need to be spent on other missions or returned to the general federal budget. The federal government works on a spend-as-you-go basis.) The likely result is that NASA would be able to select just one new Discovery mission this coming September. One of my correspondents tells me that just last week NASA's manager for its planetary program, Jim Green, said at a scientific conference that he hoped to select two Discovery missions in September unless InSight is delayed.

No matter how you look at it, InSight's problems seem likely to cause NASA to fly one fewer Discovery mission. Either InSight is canceled or NASA selects just one Discovery mission from the current competition.

If I were to place a bet, I would guess that NASA will decide to delay InSight, select just one new Discovery mission this September for launch by 2021, and select the next Discovery mission in 2019 for launch in the mid-2020s. The science InSight would conduct to study the interior of Mars is compelling and the costs of delay seem likely to be less than the cost of a full new Discovery mission. But please remember, this is only my speculation. NASA's managers need to make the hard call.

Its hard to believe the managers would let the development of such an important instrument slip to such a late date in the ATLO cycle. These problems should have been identified six months ago. Sufficient time would then likely have been available to correct these issues

I would be in favor of scrapping Insight if it meant launching the Enceladus Life Finder mission instead.

Great point Jonathon! Given that the full magnitude of what's available in the case of Enceladus's jets only became apparent in recent years, the basic idea of shuffling missions and even deleting one which didn't meet its schedule, and which will therefore drain NASA's budget further, is not an unreasonable one. Presumably too much to hope for though.

On the positive side, if in 2018 NASA does go ahead with Insite and if Russia includes a seismometer on its Exomars lander, then an immensely more sensitive network of two stations would exist. This would allow for the possibilty of locating possible quake and impact sites which isn't possible with only a single station.