Selecting the Next Creative Idea for Exploring the Solar System

With the release of the official Announcement of Opportunity (AO) early in November, NASA has officially begun the competition to select its next low cost ($450M) Discovery program planetary mission. Because planetary scientists are free to propose missions to any destination in the solar system other than the sun and Earth, these competitions bring out the creativity in the planetary science program. Will we get a Venus orbiter? A return to the Mars polar regions? A comet lander? An orbiter around the exposed core of a protoplanet? Flybys of Jupiter’s moon Io? These are just the start of the list of missions likely to be proposed. 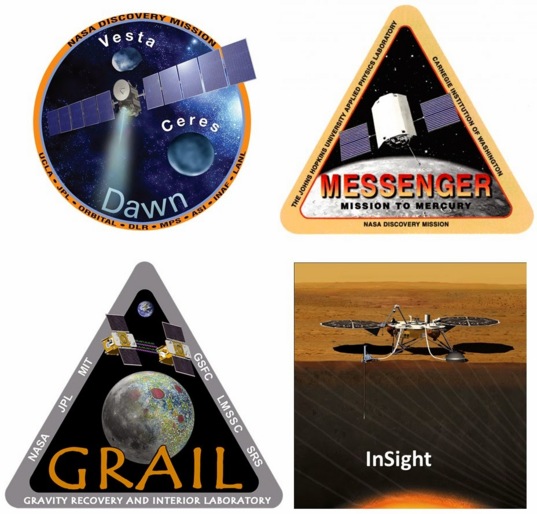 Some Discovery missions, such as have taken planetary exploration to new locations such as to the asteroids Vesta and Ceres (Dawn) or been the first to orbit Mercury (MESSENGER). Other missions return to familiar worlds to explore a new facet in depth such as the interior of the moon (GRAIL) or Mars (InSight).

The breadth of possibilities for these small missions is in contrast to that for NASA’s larger planetary missions. For its mid-cost ($700M to $800M) New Frontiers missions, scientists only can propose missions from a list of around five high priority missions identified once every ten years in the Decadal Survey. Targets for NASA’s largest missions (>$1.5B), the Flagships like Cassini at Saturn, also are chosen from an even shorter list approved in the Decadal Surveys.

Practicalities will limit the ambitions of the Discovery proposals, though. Foremost among these is the tight cost cap, $450M. This is just a little more than half the funds available to New Frontiers missions such as the OSIRIS-REx asteroid sample return mission that is in development. The Discovery cost cap also is less than a fifth the cost of the Flagship Curiosity rover that is on Mars or a quarter the cost of the proposed Europa Clipper mission.

Missions also will need to depend on solar power. In the future, NASA hopes to make radioisotope (plutonium-238) power systems available for Discovery missions, which would open up missions to the far outer solar system or the permanently shadowed lunar craters among other destinations. For the current selection, however, NASA cannot build a radioisotope system in time, with the result that the chosen mission will need to depend on solar cells. This limits the next mission to go no further from the sun than Jupiter. (For an article on the status of NASA’s plutonium-238 program, check out this article from the journal Nature.)

A long string of low-cost planetary missions (less than ~$500M) from NASA over the last twenty years shows that a wide variety of missions can be flown within these constraints:

1996:  NEAR – near Earth asteroid rendezvous and landing

2021:  Latest launch for the next mission

Based on the NASA’s last competition, the planetary science community hasn’t run out of ideas. An informal tally of proposals (NASA doesn’t release information on proposals not selected as finalists) included seven Venus, three lunar, four Martian or Martian moon, eight asteroid, three comet, one Io, and two Titan proposals. (The previous competition had an option for a radioisotope power system that enabled several of the proposals.) Most teams don’t discuss their proposal ideas (this is a highly competitive business), but so far for this latest competition I’m aware of proposals for Venus missions, a Martian polar lander (IceBreaker), a spacecraft to study Mars’ two moons (PADME), and a mission to the asteroid Psyche that would explore the core of a protoplanet.

Next June, NASA’s managers will announce a list of finalists for the current competition, and we will see which proposals the agency’s reviewers believe have the best combination of scientific merit and feasibility. These teams then will have approximately a year to prepare more detailed proposals (Phase A studies) followed by NASA’s announcement of the final winner in September 2016. The selected mission must launch by the end of 2021.

During its first decade of this program, NASA’s Discovery program selected missions approximately every two years. The next decade saw just two missions selected as NASA’s budgets tightened and it had to pay for the development of other missions. Based on the latest proposed NASA budget (for Fiscal Year 2015, which has yet to be approved by Congress), NASA would return to selecting Discovery missions more frequently, perhaps every two to three years. The higher flight rate for Discovery missions would come at a cost, however. The NASA budget does not include proposed funding for additional New Frontiers missions, ruling out more challenging missions such as landing on Venus or returning samples from the moon or from a comet.

For the last two Discovery mission selections, a number of scientists have felt that NASA was overly conservative, selecting the safest rather than the scientifically most compelling mission from the finalists. (See, for example, this article from the journal Nature.) In the last selection, for example, NASA passed over its last chance to do an inexpensive landing on of the lakes of Saturn’s moon Titan for decades in favor of a Mars lander than will reuse much of the technology proven by the previous Phoenix lander. (I will hasten to say, though, that the selected Mars InSight lander will conduct excellent science; no mission makes the finalist list that wouldn’t do great science.)

As the list of these selected low cost missions has grown, many of the easiest and lowest cost ideas have already been flown. As a result, the complexity of missions has risen over time (see this blog post), making them more difficult to develop and fly within the cost cap. Several of the selected Discovery missions also suffered significant budget overruns, delaying the start of further new missions and subjecting NASA to Congressional criticisms (see this blog post). Perhaps as a result of more conservatively judging missions during their selection, cost overruns have become less common. 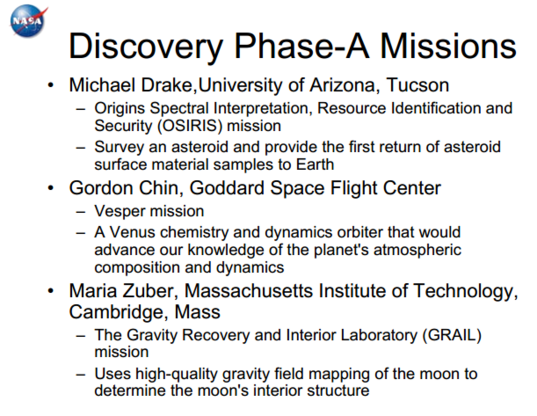 The list of finalist missions for the 2006 Discovery program selection that developed detailed, Phase A proposals. The GRAIL mission was selected, and the OSIRIS proposal was approved at the OSIRIS-REx New Frontiers mission. While Discovery spacecraft have traveled to many destinations, none have yet been selected for next-door Venus. 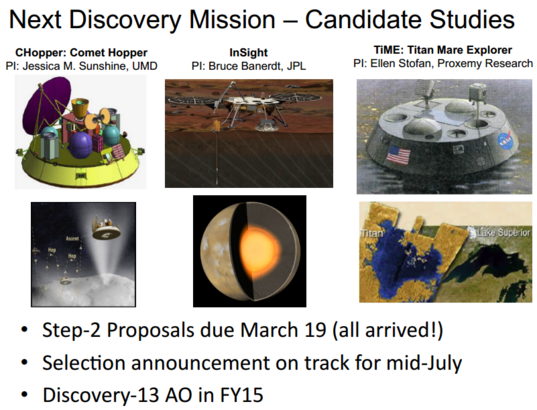 The list of finalists for the 2012 Discovery program selection. The Mars InSight mission was selected. Both the CHopper and TIME missions required plutonium-238 power systems that are not available for the current competition.

All competitions come with rules, and NASA’s managers have a 143 page Announcement of Opportunity that spells out the details for Discovery mission proposals. The key rules for this selection are:

When NASA announces the finalists for this competition next spring, we’ll see new examples the creativity of the scientific community has for exploring the solar system.