NASA's Mission to Europa May Get More Interesting Still

SpaceFlightNow.com has published an article reporting that NASA officials have asked their European counterparts if they would like to propose contributing a small probe to NASA's Europa mission planned for the mid-2020s.

If the Europeans are interested, the probe could carry out any of several possible missions. Two mentioned in the article would be a small lander or a craft that could fly through and study any plumes found erupting from the moon's surface. 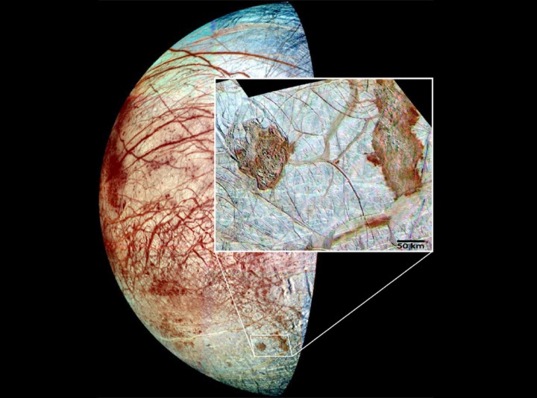 Europa as imaged by NASA's Galileo spacecraft in the 1990s

Another possibility, not discussed by the article, might be a small spacecraft that could repeatedly flyby the moon to make magnetic field and gravity measurements. Both studies are key to understanding the size of this moon's ocean and the structure of its rocky core. The main Europa Clipper flyby craft will make these measurements during each of its flybys. Both studies, however, improve with the number of passes by the moon, so a second craft would add substantially to these measurements. I'm told that one or more of the CubeSat studies NASA is separately funding as possible augments to the mission would do this.

British scientists and engineers have studied small penetrator landers that would be shaped roughly like a cannon shell that would use the force of impact to dive a meter or two into the icy surface. Penetrators have been used on the Earth to deploy probes from planes and have been proposed several times for planetary missions. (The failed DeepSpace 2 Mars penetrators were the only two ever flown so far as I know.) Penetrators avoid many of the complications involved in a soft landing. The penetrator would need an avionics module to keep its orientation and likely would need a retro rocket to reduce the approach speed, both of which add considerable complexity to the design.

Penetrators would not be the only possible small lander design. All approaches, though, would involve small probe that would carry one to a few small instruments such as a seismometer/geophone and one or more chemistry experiments. Even simple measurements could provide information that would complement the measurements made by the main spacecraft. (As a side note, the same would be true of a small lander for Ganymede added to Europe's JUICE mission that will orbit this moon of Jupiter in the early 2030's. I don't know if that design would still be open to adding a small lander that might be a near duplicate of one carried on NASA's Europa craft.)

You can read more about possible small lander designs in this blog post, this Science News article, or from this presentation.

If the European Space Agency's managers decide they might like to participate, then European scientists could propose specific probe plans as part of a future Medium Class mission competition, where it would compete against other planetary and astrophysics proposals.

The Japanese SELENE (Kaguya) lunar orbiter included 2 penetrator probes, intended to survive a 2 km/sec impact on the lunar surface. For various reasons, the Japanese space agency decided they weren't going to work and they were removed before flight.

The first and primary question ESA's managers will have to decide upon is "can we trust NASA for a joint mission, or is it just another marketing move ?" Given the recent history, I would be deeply thinking if I had to decide...

Involving international cooperations dramatically increases the risk for cost overruns, delays and cancellation. The ISS could be evacuated and decommissioned any day now, because it is an international cooperation and thus hypersensitive to totally unforseeable and unrelated events, like what happens in Ukraine. Actually, I think that those who propose this do so because they don't want the mission to happen at all, or they are very naive. NASA could easily develop a tiny daughter probe on their own, it is not a big financial part of the mission, but a huge threat to it. I hope ESA focuses on their own JUICE mission and denies any joint Europa mission with NASA.

It would be most exciting to have ESA contribute to this mission. How about constructing a lander. Now that would be really something. There's nothing better than actually being there.

Please land those cheap and quick mini-probes on Europa, whether penetrators or not. Please then sample these orange colour cracks to see if this orange material from within Europa's subsurface ocean contains any living/fossilised organic matter. Please just test the organge stuff brought up to the cracked icy surface of Europa from its ocean below. If there is biological substance, NASA or ESA will be the front runner to have all the money in the world thrown at it by govt or private consortium to find the first alien life form beyond Earth. The money will follow once alien life is found, future funding will then take care of itself from here.

Agreed wholeheartedly with BarnacleBill, but also with Arbitrary! Let's get in there and get sampling, sniffing, everything -- and absolutely ASAP! But let NASA set exactly it's own requirements, funding and timeline -- avoid ALL possible logjams, delays and mismatches!

I believe the Russian Mars 96 (Mars 8) probe carried two penetrators, but of course the craft failed to enter Earth orbit.