Operating planetary missions is an expensive proposition. This year, NASA will spend something like $215M or ~18% of is planetary science budget operating its fleet planetary spacecraft that have already launched. (These numbers are approximate because NASA doesn't separate out the costs of operating the Cassini and Lunar Reconnaissance Orbiter missions.) 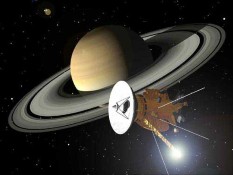 The initial costs of operating a mission during its early phases, what is known as the prime mission, are included in the funding budgeted specifically for the mission. Once a spacecraft continues operating past its prime mission (most do), it enters what is known as an extended mission. NASA budgets money to operate extended missions. The amount planned for the next several years is fixed and doesn't go up with the number of extended missions. As a result, there's a process known as the Senior Review that judges which missions should continue to be funded and at what levels to divvy up the pie.

For the past several months, NASA has been warning the planetary community that there will be insufficient funds to operate all its extended missions at their current levels.

The Senior Review encourages mission teams to both be clear on what new science is enabled and to find ways to continue to operate on smaller budgets than were used for operations in the prime mission. It's not unusual for the science return in an extended mission to equal or exceed that of the preceding prime mission.

In general, mission teams based use three key justifications for funding extended missions:

Demand up, budget flat or down, something may have to go.

The Senior Review will look across all missions and could recommend funding Cassini instead of one or more Mars missions. However, that seems unlikely to me. The Curiosity mission is just beginning what is likely to be a decade of exploration. The Mars Reconnaissance orbiter is required to help select landing sites and travel routes for the planned 2020 Mars rover as well as relay data from the rovers. The Mars Odyssey orbiter is an essential data relay for currently operating rovers. And who would suggest turning off the venerable Opportunity rover? (Neither of the last options provides much in the way of savings anyway; they are lean, mean extended missions.)

Cassini has had a long run at Saturn, having entered orbit in 2004 and been operated as an extended mission after the first four years. Between the end of its current extended mission in late 2014 and the time the spacecraft is expected to run out of fuel in 2017, the spacecraft could continue to follow up on past discoveries (for example, with three final Enceladus flybys). It also would continue to look for seasonal changes at Titan and Saturn.

However, in its last year of possible operation before its fuel is exhausted (November 2016 to September 2017), Cassini could become an entirely new mission. 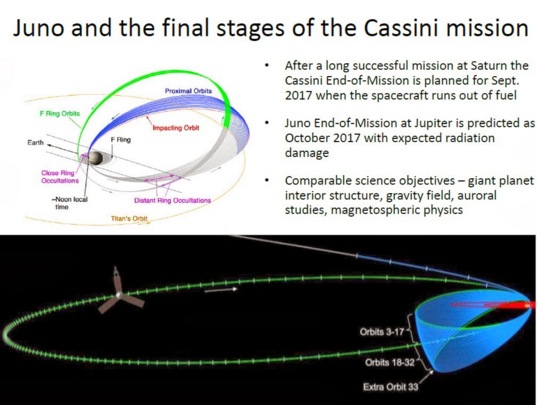 Comparison the possible end-of-mission orbits for Cassini and the orbits for Juno. By dipping close the rings and atmosphere, Cassini can make highly detailed measurements of the rings, atmosphere, and Saturn's interior. The Juno mission en route to Jupiter will provide similar measurements for Jupiter's atmosphere and interior.

Up until November 2016, Cassini will have stayed well away from Saturn's rings (except during orbit insertion in 2004) because the risk of catastrophic collision with an ice particle or boulder would be too high. With the fuel almost exhausted, though, Cassini's managers want to bring it in close to the rings and Saturn itself. Twenty orbits would carry the spacecraft just outside the rings for close up observations of their structure and mass. (The latter measurements, for example, would help scientists determine how old the rings are.)

Following these orbits, the spacecraft would slip into the gap between the inner most ring and the top of Saturn's atmosphere. From these 22 close-in orbits, the Cassini mission would essentially replicate the measurements that will be made at the same time by the Juno mission to Jupiter: detailed measurements of the interior of Saturn and of its atmosphere. As a bonus, scientists can make more detailed measurements of the rings. And for all of us who vicariously explore the solar system through these missions, think of how beautiful the images would be looking out at the rings and Saturn from just above the clouds.

At the end of the mission, its fuel gone, Cassini would enter and burn up in Saturn's atmosphere, an end that would prevent it from accidentally impacting and contaminating Enceladus or Titan with micro-organisms from Earth.

All of the science in this end-of-mission scheme would be new, never done before science because extending the mission would allow Cassini to go to somewhere new. NASA thought that these measurements were so valuable at Jupiter that they funded and are flying the ~$1B Juno mission, which will do similar science there.

At one time, funding for Cassini's full extended mission to the end of 2017 had been approved. Then NASA's planetary budget was cut and now the mission has to seek approval again to continue operating.

I suspect that the Cassini team is scrubbing its budgets to look for ways to reduce costs and still enable the close up orbits at the end of the mission. That team has stated before, though, at a large portion of the budget goes to simply operating the spacecraft safely. Cuts would have to come from reducing science operations. (I don't know if the orbital ballet enabling the close-in orbits would allow them to be done earlier to shorten the length of the extended mission.)

However, the real solution is for NASA to receive more funding so that it doesn't have to make choices that turn off a highly productive mission to save 4% of its planetary science budget.

If you would like to see Cassini make those final orbits, skimming the rings and Saturn's atmosphere, I encourage you to join the Planetary Society’s campaign to have NASA's budgeting program receive more funding.

For those who like to see the numbers, I've gone through NASA's Fiscal Year 2014 budget proposal to pull out the planned budget for extended missions and the budget for Curiosity's last year of funding in its prime mission.

The budget doesn’t break out funding for the Cassini or Lunar Reconnaissance orbiter. Public accounts have put the Cassini extended mission operations at $60M to $65M a year. The MESSENGER orbiter at Mercury is expected to run out of fuel before the start of FY15, and will not be needing funds beyond FY14.

All extended missions currently are funded through the end of FY14. The crunch begins in FY15 when the budget numbers show a funding cut and Curiosity needs new funding to begin its extended mission.

While NASA's budget documents don't show spending categories for its Outer Planet budget, the chart below shows sharp cuts to this account. By FY16, funding is too low to support the Cassini mission (and may represent NASA's contribution to Europe's JUICE Jupiter/Ganymede mission). There may be some funding for Cassini in FY15. Proposed budgets following FY16 show approximately flat funding.

As you point out yourself, and as with the GRAIL extended mission,, those 22 riskier closer-in orbits near the rings could end Cassini's mission rather abruptly anyhow. If it's funded, we just have to hope we get some science out of it before such an ending. But if that [unfortunately] happens, do the funds quickly become available to other projects?

Gene: Yes, though it may not stick around in the subsequent fiscal years.

The information posted about MESSENGER is inaccurate; if it continues on its current planned trajectory, the spacecraft does not run out of fuel until March 2015.

Louise - Thank you for the update. I based my Messenger statement on news accounts. Good to hear that she will have a longer life at Mercury.

The extension of the the Cassini mission seems to be the most expensive for F Y 2014. I suggest we try to raise as much money as possible privately, and make it available to NASA.. Bye way, I had great difficulty communicating with the web site this morning. Maybe me...maybe you suggest checking it out.