Last week, planetary scientists gathered for the 44th Lunar and Planetary Science Conference. This is one of the top scientific conferences held every year for planetary science, with thousands of oral presentations and posters presenting the latest results from on on-going missions or analyzing data from past missions.

Only a tiny fraction of the presentations at LPSC dealt with future missions. Even so, this is still one of the best sources for insights into details of missions under development. In this post, I’ll cover some of the abstracts for the presentations that give a flavor of the breadth of the proposals. (Abstracts are typically two pages and qualify as mini papers, so there’s plenty of detail.)

Narrowing down the abstracts proved to be hard. There are abstracts that provide the first detailed descriptions I’ve seen of the instruments that will fly on future missions. Examples in this category include the cameras and visible to near-infrared spectrometer for NASA’s upcoming OSIRIS-Rex asteroid mission (launch in 2016). In some cases, I’ve already written about the proposed missions or very similar versions, such as the European Inspire concept for multiple geophysical stations on Mars, landers for Venus, or flyby spacecraft for Jupiter’s moon Io.

What follows are summaries of my selection of abstracts that present concepts new to this blog and that I found most interesting. 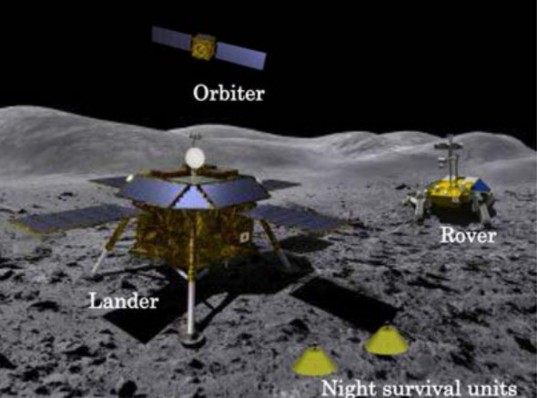 Components of the Selene-2 mission

Abstract 1838: SELENE-2 – The Japanese space agency has been studying a follow-on mission to their highly successful SELENE lunar orbiter since 2009. SELENE-2 would place a lander and rover on the lunar surface, and would be Japan’s first major lander on another world. (The Hayabusa missions include tiny landers for asteroids.) In addition to developing the lander and rover technology, the mission would conduct serious science. The lander would be a geophysical station with a seismometer, a heat flow probe, a magnetometer, precise radio tracking, and a laser reflector. (The last would allow precise measurements of the distance between the Earth and lunar surfaces by reflecting laser pulses from Earth-bound telescopes. Combined with radio tracking, this will help study tiny wobbles in the moon’s position giving clues to the interior structure.) The rover would study the chemistry of the lunar surface with a number of spectrometers to study composition. An orbiter with a small number of instruments would complete the mission. Unfortunately, it appears from the abstract that the Japanese space agency has lacked funds to move the mission out of the study phase and into development. As a result, the launch date has slipped from 2015 to 2018 at the earliest. If this mission does fly, it will join a number of others from China, Russia, and India in the coming decade. The moon could prove to be even more crowded with spacecraft than Mars will be.

The following two abstracts propose missions for very small spacecraft, built on the CubeSat paradigm. CubeSats are designed around small, standard building blocks (cubes). Depending on the mission, a spacecraft may use one or several cube building blocks. CubeSats have become popular for Earth orbital missions for implementing very focused science on small budgets. Various teams are now looking at potential uses of CubeSats for planetary missions. Many instruments cannot be hosted on these tiny platforms, so these craft won’t replace larger spacecraft. However, CubeSats may enable a new class of standalone missions or as auxiliary spacecraft carried by much more capable mother ships.

Abstract 1233: LunarCube – This abstract highlights the challenges of adapting CubeSats to missions beyond the Earth and the limitations on the science they can do. The authors point out that advances in consumer electronics have led to reductions in size, mass, and power while processing capabilities have increased. However, to operate beyond Earth orbit, CubeSats must be enhanced for longer mission lives, require navigation and propulsion systems, more robust communications systems, and hardening for more severe radiation and thermal environments. (These are the reasons that planetary missions of all sizes cost substantially more than equivalent Earth observing satellites.) Once these challenges are met, the resources for the instrument(s) will be constrained. A Lunar Water Distribution LunarCube could carry a near infrared spectrometer to map water in lunar soils that would be limited to 2 kilograms, 2 Watts of power, and 1500 bytes of data returned per day. Two other mission concepts are listed with similarly constrained payloads: a craft to analyze plumes kicked off the lunar surface by a separate impact craft and a proof of concept radio astronomy mission that would operate from the surface. The ultimate goal for the LunarCube project is to create a design for a “virtual ‘smart phone’ with a variety of experiments.” Editorial Thoughts: Despite the limitations, missions like these to the moon or perhaps to near Earth asteroids would perform real science. They would be especially useful for training new researchers on how to develop and manage missions at relatively low cost. This poster may be downloaded as a PDF.

Concept for small Uranus spacecraft based on CubeSat form factor

Abstract 1860: Small Spacecraft Exploration of Uranian Moons – This abstract proposes a solution for an eventual Flagship (~$2B) Uranus orbiter. To fully observe Uranus and its magnetosphere, the spacecraft will need an orbit that carries it over Uranus’ poles. The moons, however, orbit above the equator and will be difficult to observe. The authors of this abstract propose that the main spacecraft would carry four large CubeSat-based daughter spacecraft that would examine the moons. (CubeSats designs can be enlarged by ‘stacking’ multiple cubes; this design would have the volume of six cubes.) These small spacecraft would operate in pairs. As a pair approaches a moon, they would image its surface and measure its gravity by monitoring each other’s relative speed (much as the two GRAIL spacecraft did for our moon). These craft would need advanced technologies. Their solar panels would need to convert approximately 50% of the light striking them to electricity. (This is much higher than current production solar panels can do, but the technology is under development and in the lab has reached 42%.) The daughter craft would use very small ion (“electrospray”) engines to set up their encounters with the moons. The craft would need to be able to carefully manage their power use and storage and largely operate autonomously.

Abtract 1291: Mars Aerial Vehicle – Airplanes have been proposed for Martian exploration since at least the late 1970s. The extremely thin atmosphere of Mars makes flight difficult, and the proposals I recall all had lives measured in hours before they exhausted their power reserves and crashed. This proposal would make the craft part balloon and part aircraft. The shape would be that of an aircraft, but the body and winds would be filled with helium, giving the craft 70% neutral buoyancy. The rest of the necessary lift would come from a propeller powered by batteries that would be recharged by solar cells on the wings. While the abstract doesn’t discuss how long the craft might operate, it would seem that it could operate for at least days and perhaps much longer until too much helium had leaked out. The aircraft would carry a ground penetrating radar and a magnetometer to search subsurface ice and hydrated soils. Because the aircraft would be much closer to the surface than orbital spacecraft, resolution would be much higher, allowing it to pinpoint local deposits. 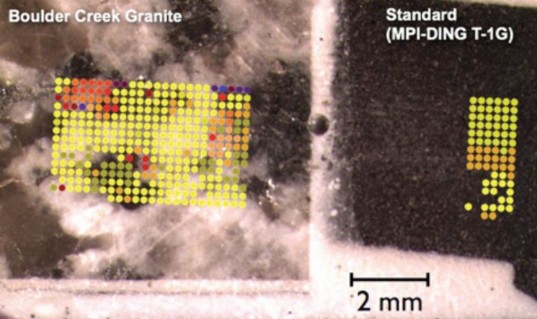 Several instruments that would date Mars material could measure dates for a diversity of rock and soil fragments within a sample. This image shows the laser operating in a grid pattern. Note that each sample is a small fraction of a square millimeter.

Abstract 1762: Rb-Sr Dating – Over the last few years, several research teams have made good progress in developing instruments that could date rocks and soils and be carried on Mars rovers. Unlike most worlds whose rocks formed within a few hundred million years of the birth of the solar system, Martian rocks have formed over billions of years. Unfortunately, establishing the chronology of Mars’ geologic history has been tough and subject to large errors. (The current method depends on counting craters, with surfaces that are older having more craters. However, the rate at which craters are formed is uncertain and craters on Mars can be buried by dust or eroded away.) The instruments under development would examine rocks on Mars and fix their age to within tens of millions of years. Most of the instruments, such as the one described in this abstract, would use micro lasers to melt tiny (~75x5 microns in this case) samples of rock or soil. The instruments would then measure the ratios of key isotopes in the released vapor to establish ages. One of the elements would be the radioactive decay product of the other; since the rate of decay is well known, the ratio of the two would establish the age. This abstract is one of several at the LPSC meeting describing progress. I’ve highlighted this one because it is more descriptive (i.e., less technical) than the others and probably would be the most readable for many of the readers of this blog. Editorial Note: The next opportunity for one of these instruments to fly to Mars would be on NASA’s 2020 rover. I don’t know if any will be technically ready in time or whether the limited instrument budget for that mission can afford the cost of completing development for a flight ready instrument. This poster may be downloaded as a PDF.

Really appreciate the LPSC links. i always hear how wonderful the poster sessions are, now i get to check some out. Thanks

Thanks for the updates. In lieu of the Abstract 1291: MAV, I think the TPS engineering testbed idea that worked should be proposed by someone. That idea is what we called in 1992 The Mars Balloon. See The Planetary Report Vol XII Number 6 November/December for specifics. In place of the tail a dead weight could be used to anchor the balloon in place. An anchor "chain" could be developed that would be a retractable cable for altitude/downrange changes if they don't want a free floating balloon; as originally intended. This could be guided by a simple avionics box. Just an idea. Maybe someone would run with it one day.