Editor's note: This post originally appeared on Van Kane's blog, Future Planetary Exploration, and is reposted here with his permission.

An update was appended to this post on February 6. --ESL

I’d hoped that I’d never need to write this post. The latest news in the United States is that a poison pill known as the Sequester is looking increasingly likely. If it happens, it will be a body blow to NASA’s planetary science program.

First, a bit of background. The two political parties in the US have been fighting over how to reduce the federal government’s budget deficits, but have been unable to reach a compromise. To enforce discipline, they passed a law that would require an 8.2% cut to all discretionary federal spending including the NASA budget. The cuts were considered so arbitrary and onerous that it was thought that the two parties would work to find a compromise. Numerous news articles are reporting that Congressional leaders are coming to accept that the sequester will happen; arbitrary and onerous apparently seems more acceptable than compromise.

In this post, I’ll look at what the sequester, due to take effect March 1, might mean to NASA’s future planetary exploration. I want to emphasize that NASA’s managers have properly been all but silent on how they plan to implement the cuts if they come (with one exception noted below). This post will illustrate the magnitude of these potential cuts.

I don’t know the details of the sequester law. For example, does every program within every agency have to be cut by the same amount? It appears not, because NASA’s managers have publicly stated that the James Webb Space Telescope’s budget will be spare the impact of the sequester. (Rightly so. Delaying launch would mean substantial increases in the costs to complete the telescope.) If NASA protects some programs, then the cuts that would have been applied to them will have to be borne by increased cuts to other programs. 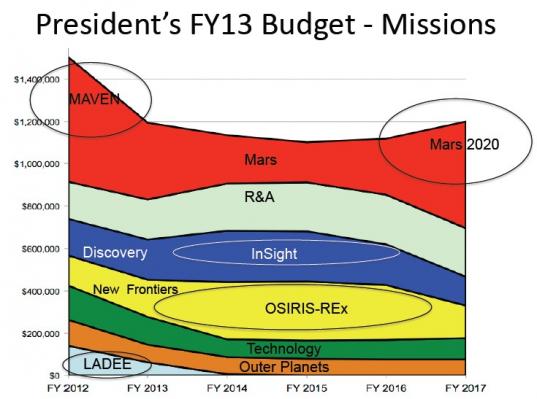 R&A is Research and Analysis, which supports the scientific research community. From this presentation (PDF).

After two years of small budget increases (inflation plus a little), the President’s proposed budget for Fiscal Year 2013 imposed a 20.6% cut to the planetary program. (Congress hasn’t passed NASA’s FY13 budget, and so the program is operating based on the President’s proposal.) The sequester cuts would be in addition to the already planned cuts. Those planned cuts forced NASA to drop out of a joint Mars program with the Europeans, ended any chance for now of a mission to Europa, and reduced the planned rate of Discovery (~$500M) missions from several a decade to one.

One challenge to looking at how NASA might further cut the planetary program if the sequester happens is that we don’t know how much of its overall budget it will protect. NASA’s top three priorities are operation of the space station, developing its next human spaceflight system, and completing the James Webb Space Telescope. Given this, I guessing that the minimum cut for planetary science might be the 8.2% and the maximum might be double that (i.e., NASA protects half of its budgets for programs it considers higher priority). In dollar terms, here’s how that would break out:

NASA’s planetary program basically does just four things: develops technologies to enable the next generation of missions, develops missions, operates missions, and supports research to study the data returned from missions. NASA divides these activities between several budget lines (see the first chart), but I went through the FY13 budget proposal and combined funding across budget lines into these four categories (plus a small, everything else category). I’ve sure I missed some items and perhaps combined some items that shouldn’t have been. In broad outline, however, I think the budget figures below should be about right plus or minus some.

So, let’s start with the big picture (click on any image for a larger version): 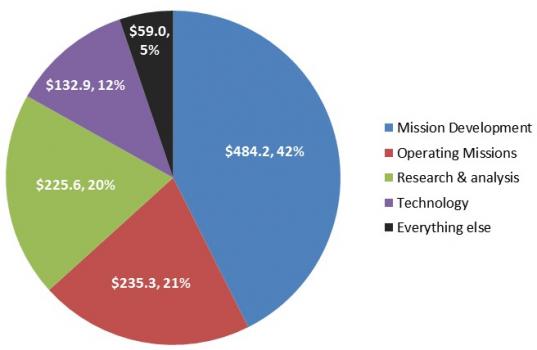 One obvious option would be to simply spread the cuts across all the planetary programs (the ‘spreading the peanut butter’ approach). This, however, likely would mean that some missions in development would slip (is there, for example, a good backup asteroid to the rare type planned to be sampled by the OSIRIS-REx mission if its launch were slipped?). Missions budgeted beyond their initial lifetime (and budgets) operate on fairly lean extended mission budgets and further cuts can mean operating with very lean staffs meaning that mistakes are more likely and data collected doesn’t get properly analyzed. 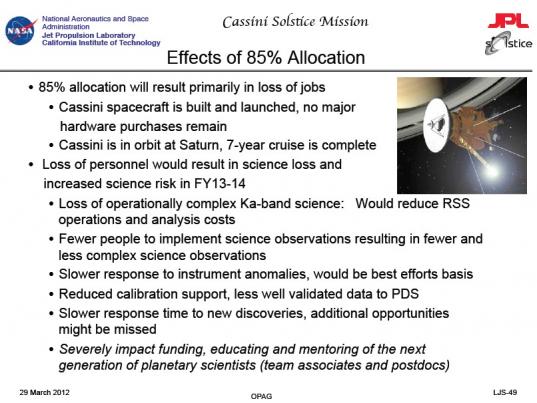 Effects on Cassini of budget cuts

The managers of the Cassini mission detailed the impact of further cuts on that mission in a presentation last spring. Cuts to other operating missions likely would have comparable effects. From this presentation (PDF).

If the sequester were the first cut to the planetary science budget, some version of the peanut butter approach might work. However, the sequester on top of the FY13 cuts could add up to as much as 30% or more in cuts in a single year. The post-sequester budget also becomes the new baseline budget for developing future budgets. NASA would have to live with this cut in following years.

At some point, it’s better to cut entire missions so that the remaining missions can be done well. So, what might be cut? 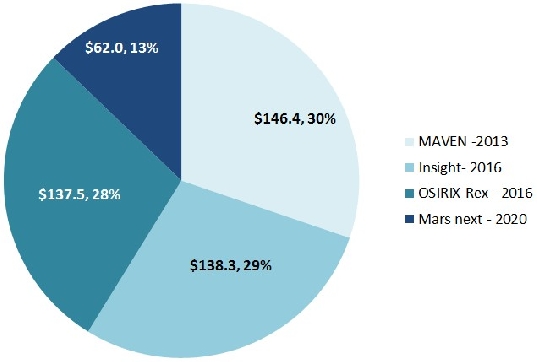 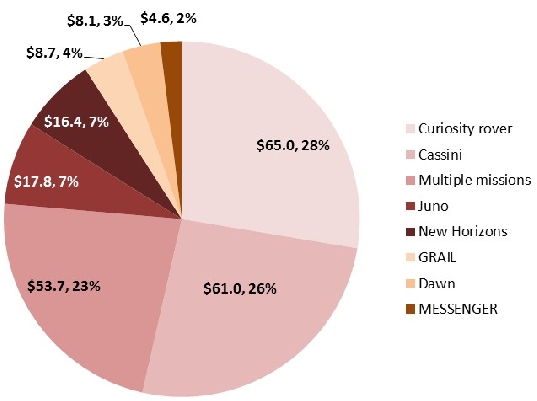 There’s not a mission in the list that I would want to see cut. To save tens of millions of dollars in costs, some big mission would have to be cut (cutting the Messenger mission, for example, just doesn’t save much).

I will leave it to each of you to pick which cuts you find least terrible. Should the Discovery program, and its just-selected next mission, the Mars Insight geophysical station, be ended? Should the Cassini mission be terminated? Should NASA cut funding to a substantial portion of its researchers (and this means ending careers; think of this as laying off highly trained people who are the reason these missions fly)?

If the sequester happens, have empathy for the management of NASA’s planetary science program who will have had to make these choices. In the meantime, support efforts to get Congress to increase future planetary budgets (see here and here).

Sequestration for the Perplexed and Minor Corrections

The journal Science has posted an article on the sequester for the perplexed that left me even more perplexed (and it's not because the writing isn't clear). (The sequester would be automatic budget cuts applied to most US Federal programs at the beginning of March.) It appears that the cuts that will be implemented this year may be 8.2%, 6.4%, or 5%. The wording suggests, however, that any smaller cut this year may have to be made up for with larger cuts in future years to hit a total of $1.2 trillion over ten years. It's also not clear what at what level of programs the cuts must be applied -- for NASA it might be the entire science division, each major science program (planetary, astrophysics, Earth science, etc.), or by budget category (for example, the Mars program).

Having had to decide where to cut programs in my former career, I know how painful this is and my sympathies are with the managers who have to plan for this.  My hope is that the political process will work at the last moment and we never have to learn what was on the chopping block.

In the charts showing the budgets for the Maven mission development and Curiosity rover operations in my earlier post, my spreadsheet software showed incorrect percentages (but correct dollar amounts).  I've corrected these charts, and I thank Duane for pointing out the problem.

Casey Dreier points out that the sequester will be calculated from Fiscal Year 2012 budgets. NASA's overall budget for that year and this year are almost the same, so if NASA is given discretion on how to distributed the cuts, this may not make much of a difference. However, if the sequester is applied to each program, the news might be better for the planetary program if FY12 is the basis:

(All figures are in millions of dollars.) If the planetary science program is cut less, though, other NASA programs likely will be cut more.

The Planetary Society's Save Our Science Advocacy Campaign

Write Your Representatives in Congress

This problem extends to all science and technology research being performed in this country. The national labs, partners with many NASA projects, are going to be greatly impacted as well. It's very troubling that science and education in our great nation has taken so much of the impact caused by horrid mismanagement and lack of foresight that our elected officials continually display. What made this country so great in the last century was a purposeful drive bolstered by a strong educational system and competition with a global super power. We, as a nation, no longer feel that we need to compete with nations like China, Russia, and even Iran. Our elected officials and large corporate leaders look only to increase their margins and pocket what they can. The lack of respect towards this country, towards our constitutional ideals, and towards ourselves is terribly troubling. But all is not lost, there are a few entrepreneurs that rally against this dismal and appalling state of things. The Planetary Society, National Space Society, and organizations like Virgin Galactic, Scaled Composites, Blue Origin, SpaceX, and a few others are the shinning examples of a steadily growing counter-culture that will, one day in the near future, stand as the beacons of hope in a country that has clearly lost it's way. Stay strong, committed, and driven; we will prevail.

Well said James. Thank you. I don't understand how this last election got these lousy non-caring politicians reelected. Last nights news had a report that stated 52% of the voters are now very unhappy with the Obama Administrations leadership and the nation level of the economy. ... I guess they could not see this coming back in '08 so he got elected. Excessive gov't has to go.