Last year, NASA's managers invited the European Space Agency (ESA) to propose a small spacecraft to explore the Jovian system. The small craft would be carried to Jupiter by NASA's own, large Europa multi-flyby spacecraft. This daughter mission could add to the exploration of Europa or study another target.

ESA has recently posted the results of studies for two possible missions. While these were concept studies and not an actual proposal from ESA to NASA, they give an idea of the possible capabilities and limitations on an ESA contribution.

Current and in-development missions already will conduct many of the obvious studies for the giant planet's system. Next year, NASA's Juno spacecraft will study the Jupiter itself from just a few thousand kilometers above the surface. ESA's JUICE spacecraft will arrive in the late 2020s to study Jupiter from afar, flyby Europa and Callisto multiple times, and then orbit Ganymede. NASA's Europa Mission (apparently no longer called the Europa Clipper) will flyby Europa 45 times as well as flyby Ganymede and Callisto. These missions will carry suites of extensive and highly capable instruments.

A small ESA spacecraft would need to find a scientific angle not already taken by its larger cousins.

Under NASA's proposal, the American space agency is reserving space and 250 kg of mass to host the European spacecraft. (NASA is also separately reserving mass for the equipment to connect the two spacecraft.) 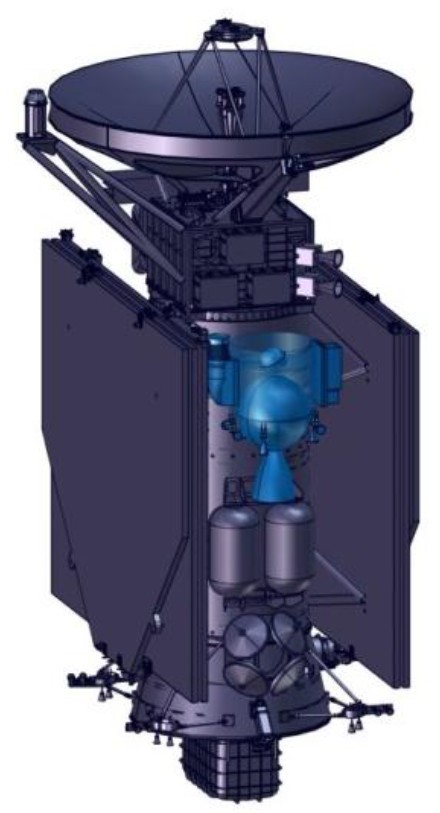 One concept for an ESA daughter probe (in blue) shown attached the NASA’s Europa Mission spacecraft.

So if you had a ride to the Jupiter system for 250 kg, what can be done?

Two obvious possibilities were mentioned at the time that the offer was announced: build a small lander for Europa or a small spacecraft that would fly through any plumes erupting from Europa's surface. The ESA team looked at both.

For a lander, the European study group considered a type of hard lander known as a penetrator. Shaped roughly like a cannon shell or small rocket, penetrators smack into the surface and then travel a few meters into it before coming to a stop. (Think of a bullet shot into the ground. The friction between the bullet's surface with the soil slows and eventually stops the bullet.) 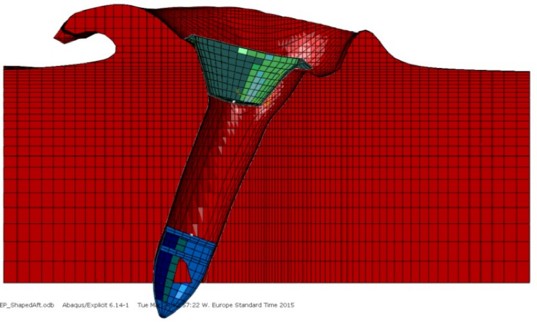 Concept illustration of a Europa penetrator (blue) embedded in the icy surface. An after body (green) remains on the surface with the antenna to communicate with NASA’s Europa mission spacecraft. A cable would connect the two sections.

Penetrators have been used on the Earth to deploy sensors from planes into remote locations such as ice shelves. Penetrators have the advantage of not requiring expensive landing systems – the penetration into the surface supplies the braking. A unique advantage on Europa is that once buried, the surrounding ice protects the probe from the radiation fields around Europa.

The concept studied would use the penetrator to deliver two sets of instruments in to the ice. The first set would study the chemistry of the ice and materials within it. A habitability package would use chemical reactions to look for conditions such as pH consistent with possible life, a mass spectrometer would analysis the composition, and a microscope would image the sample. A seismometer would record Europa-quakes to study the level of activity within the icy crust and to gather clues about its structure. 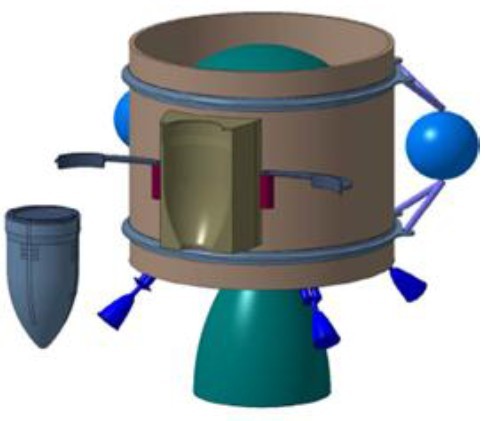 The penetrator with its deployment stage

The penetrator would be delivered by a deployment stage that would essentially be a small spacecraft with a substantial retrorocket. The main NASA spacecraft would target the daughter craft to pass just 35 km above the landing zone. The rocket would fire, reducing its speed to zero relative to the Europan surface below. The delivery spacecraft with the attached penetrator then begin their free fall to the surface. The delivery craft would have 231 seconds to reorient itself so that the penetrator points straight down and then release it. NASA's Europa spacecraft passing far overhead would have a short few minutes to listen for a radio confirmation that the landing succeeded.

SRM burn is the rocket burn that removes all velocity between the penetrator and the surface of Europa. The diagram uses the older name ‘Clipper’ for the NASA spacecraft.

Approximately ten days later, the NASA spacecraft would return to Europa and receive the data collected by the penetrator's instruments.

While the penetrator concept is exciting, the devils are in the details. Planetary penetrator missions have been studied for many potential missions. Russia launched two on a mission intended for Mars but which never left Earth orbit. NASA delivered two tiny penetrators to Mars, but they were never heard from after they were released by their carrier spacecraft. Japan spent years developing penetrators for the moon but eventually cancelled the project because of development problems.

A key problem with penetrators is that they need relatively flat landing sites for successful landings. Europa's surface is covered in slopes and rough terrain. Also, penetrators are built to tolerate high vertical velocities, but any lateral velocity can destroy the payload inside. (Put another way, engineers can design for high G's in one direction, but it's hard to design for all directions.) This means that the retro rocket must successfully kill all but the smallest lateral movement so the penetrator moves only vertically during its descent.

Another problem with penetrators is that the space inside is small and any instruments must be built to withstand high impact forces. As a result, there's usually significant development required. The penetrator concept report states that the instruments to study the chemistry of the ice are at a low state of development for use in a penetrator.

Issues such as these have kept penetrators as a great idea that has never been matured enough to become a reliable tool for planetary exploration.

My take on the report describing the penetrator concept is that delivering a penetrator for Europa appears to be a high-risk possibility both for completing the development in time for a launch and for actual delivery. Another significant problem is that the concept craft would have a mass greater than 300 kg, well above the 250 kg NASA is offering.

The other concept studied by ESA's engineers would be a daughter spacecraft that would be a straightforward use of existing technologies. The original idea was for a small spacecraft that could fly through plumes erupting from Europa. This idea seems to have lost its appeal. First, diligent searches have failed to confirm the original observation of a possible plume (which was made at the limits of detectability). Second, NASA's Europa spacecraft is highly capable with cutting edge instruments, and it could fly through any plumes itself.

Between the Juno, JUICE, and Europa missions, almost all of the Jupiter system is already targeted for detailed study. An exception, though, is the extremely volcanic moon Io that sits deep within Jupiter's radiation field. That moon became the target for the second study.

In this concept, NASA's craft would release the European orbiter shortly after the two jointly enter Jovian orbit. The ESA craft then would fire its own engine to lower the perijove of its orbit to encounter Io at least twice. 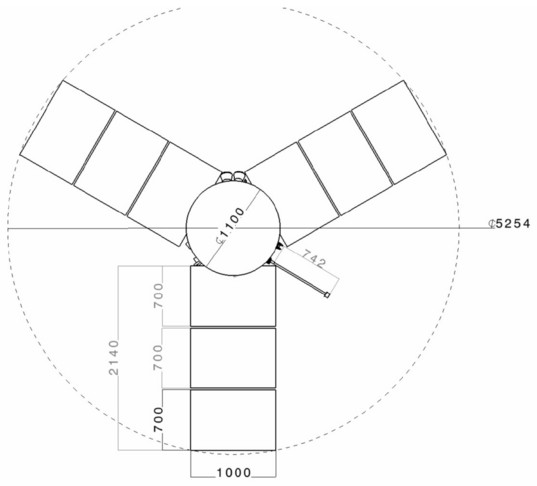 The Io flyby spacecraft would be so small that this top view engineering diagram uses millimeters for its length units. The triangular main spacecraft body would be below the center main antenna dish. 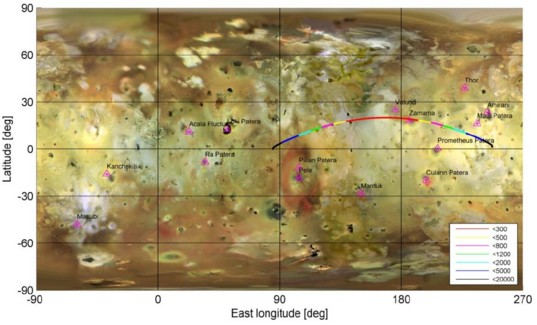 The trajectory for each of the two Io flybys (second flyby shown here) would be chosen so that the ground tracks pass over several areas of known volcanic activity so that these areas could be studied in high resolution. The first flyby would pass 500 km above the surface at closest approach, the second flyby 100 km.

Jupiter's radiation is strongest in the plane of the equator where its major moons, including Io, orbit. Since the ESA craft would be released from the NASA craft in an equatorial orbit, the ESA mission would receive the full radiation baking. ESA's spacecraft would have to traverse this radiation on both the inbound and outbound legs of its passes. (A larger, fully dedicated Io mission such as the proposed Io Volcano Observer proposed for NASA's Discovery program, would use a polar orbit instead, limiting its radiation exposure.) The tiny ESA spacecraft potentially could perform more than two flybys if the harsh radiation close to Jupiter degrades the craft's electronics more slowly than expected.

The Io flyby concept would miss the 250 kg target weight by 17 kg. To get that close, the concept design had accept a “more risky operational scheme”, that is, reduce backup systems and capabilities to minimize weight.

Either of these missions would be an exciting addition to the already planned JUICE and Europa missions. The Io flyby craft seems to be less risky both to design and to fly.

When NASA first announced that it would offer room and mass for an ESA probe, ESA's managers said they would let scientific teams propose which concepts would be considered. If this is still the plan, then these two proposals are proof of concept studies. We may be seeing even more interesting proposals from the science teams. I can think of several alternative probes.

At this point ESA's managers have not decided, so far as I know, whether it will fund a probe to be carried by NASA's craft. Time also is short to select, design, and build any lander or spacecraft. However, if ESA does contribute a small probe, the exploration of the Jupiter system may be more interesting than it already promises to be.

Can't help but wonder whether Jupiter's amazingly dense radiation belts could be put to use. I mean, nature's given us a hugely powerful particle accelerator. The MeV-scale protons aren't super interesting IMHO but if you were to use a magnetic funnel to concentrate and up the energy to the GeV range you have the potential for spallation (aka, making super-intense neutron sources) and antimatter production.