We have moved closer to having a new tool set to explore the planets. For several years, scientists and engineers have talked about using tiny spacecraft known as CubeSats for interplanetary missions. However, a number of daunting engineering challenges have stood between these ideas and reality. A pioneering mission was needed that would take on those challenges and prove the technologies.

Recently, NASA announced the Mars Cube One (MarCO) mission that will fly two CubeSat spacecraft past Mars as part of its larger InSight Mars mission. While the MarCO spacecraft will fulfill a specific role in the InSight mission, their real importance likely will be to prove that these tiny spacecraft can be used for deep space missions. 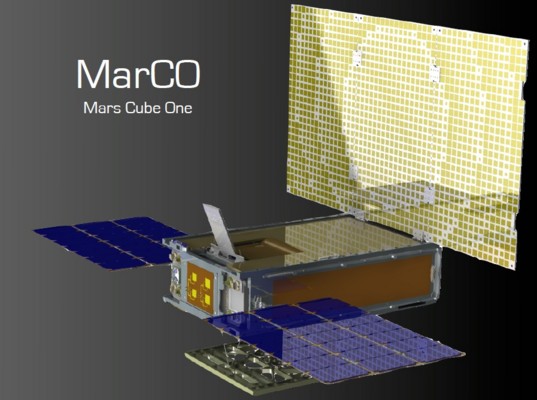 Artist’s illustration of the design for the MarCO spacecraft

CubeSats were originally conceived to use the revolution in miniaturized electronics to allow university students to design, build, test, and fly their own tiny, complete satellites. A basic CubeSat is 10 x 10 x 10 cm (1 liter) and weighs no more than 1.3 kilograms. Within that tiny space the satellite has to perform all the essential functions of a spacecraft: power, command and control, communications, and operate a payload that makes some kind of measurement.

The specification of a standard form factor for these nano spacecraft has allowed companies to offer pre-built subsystems designed to fit within the volume. (This reminds me, on a much smaller scale, of the industry created by the release of the original IBM PC to supply subsystems for clones and add-ins.) If one liter of volume proves to be too small for a mission, the specification allows for cubes to be combined to create spacecraft of 2, 3, 6, and 12 liters, or units (U) as they are called, to be built.

So far, well over a hundred CubeSats (and probably several hundred) have been delivered to Earth orbit. Sending them into deep space, however, requires simultaneously addressing a number of new technical challenges including:

Solutions to all these problems have been developed and proven for large conventional spacecraft. CubeSats present the problem of meeting these challenges in a volume about the size of a loaf of bread (a 3U design) or two (a 6U design). Many teams are working on these problems (there’s even an annual conference). The MarCO spacecraft will be the first to make the attempt.

This initial interplanetary flight will focus on an engineering goal instead of a scientific investigation. The InSight mission will place a lander on the Martian surface that will study Mars’ interior. During its descent, the lander will relay engineering data that will signal its status and its expected successful touchdown. Unfortunately, geometry between Earth and the lander’s descent path means it can’t send its data directly back to Earth. The Mars Reconnaissance Orbiter (MRO, already at Mars) will listen to InSight’s data stream, but its design prevents it from simultaneously listening to the lander and relaying that data back to Earth. The orbiter then disappears behind Mars as seen from Earth before it can relay its data. We will not know whether InSight survived its seven minutes of terror for another hour or so until MRO reappears from behind Mars. 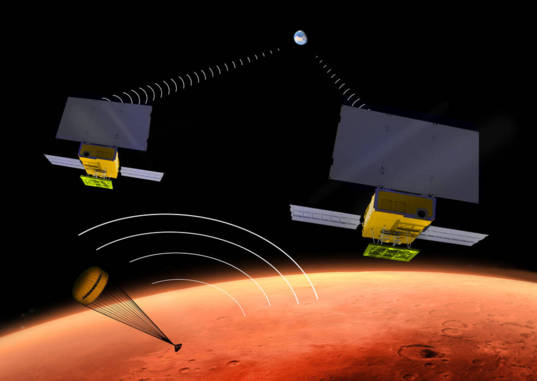 The MarCO spacecraft will be positioned so that they can receive and transmit the data from the InSight lander in real time.

The twin MarCO CubeSats will fill this gap with real time relay of the InSight lander’s descent data. They will flyby Mars at an altitude of 3500 kilometers (just inside the orbit of the Martian moon Phobos), where one antenna will listen to the InSight lander’s UHF broadcast while another antenna relays the data in real time to Earth (using X-band frequencies).

While the MarCO spacecraft will not conduct scientific investigations, their mission does impose some engineering challenges in addition to those faced by all planetary CubeSats. First, the spacecraft must operate from the distance of Mars, where the sun is fainter and generating power from the solar cells a greater challenge. For the crucial data relay, the solar cells must be turned away from the sun to point the antennas to Mars and Earth. As a result, a capable battery system must be shoehorned into the spacecraft’s internal volume. 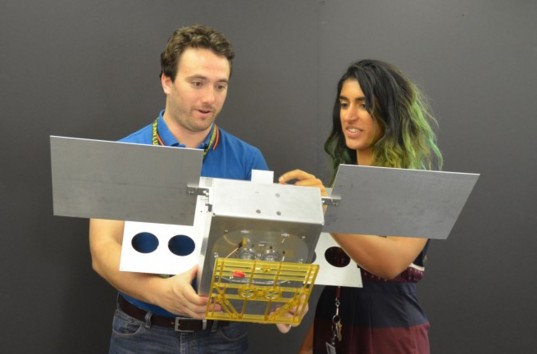 A full size mockup of the MarCO spacecraft, with its solar panels and antenna deployed, shows its small size.

The MarCO spacecraft will be carried into space on the same upper stage that will send the InSight lander to Mars. Following its release from the booster stage, each CubeSat becomes an independent spacecraft. It must successfully deploy its solar panels and antennas. It must survive and operate in deep space without any critical hardware or software failures for six and a half months. It must keep itself steadily oriented with its solar panels pointed to the sun and later its antennas pointed to Mars and the Earth. It must keep in contact with its operators on Earth. It must correctly perform up to five trajectory correction maneuvers to align its trajectory to correctly pass over the InSight landing zone. It must be able to relay up to eight thousand kilobytes of data per second from distant Mars. And all this capability must be packaged inside a volume of space that’s about twice the size of the shredded wheat box in my pantry. 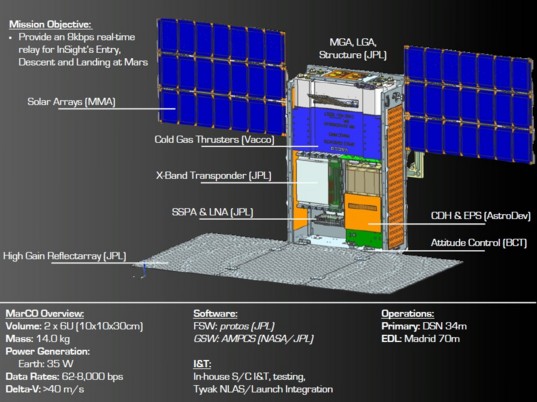 Design for the MarCO spacecraft

The spacecraft designers also have a stretch goal to include a camera. If they find the time, then we should get postcards of Mars as the spacecraft swing by.

Time to design, build, and test the spacecraft is tight. Launch comes next March, and the spacecraft will need to be delivered earlier than that to be integrated into the upper stage. 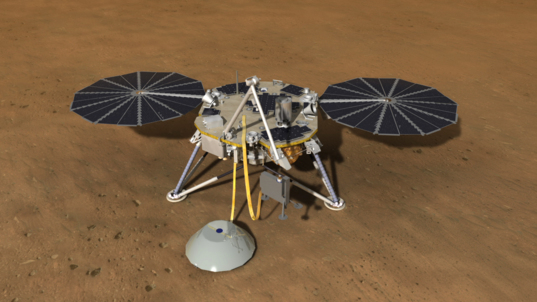 An artist’s illustration of the InSight lander on Mars following its landing and deployment of its instruments. The MarCO spacecraft will relay data from the lander as it descends to the surface.

CubeSat spacecraft have been built for as little as several tens of thousands of dollars (plus free student time). Those figures, though, are only for the tiniest and simplest of CubeSats that operate in Earth orbit. The MarCO budget reflects the difficultly of building larger, robust, and more capable spacecraft and is $13 million. This investment, though, will be repaid as the engineering solutions developed for this mission are applied to future planetary CubeSats.

Fortunately, there seems to be no shortage of ideas for science missions using small, independently flying instruments. You can read about several of these here, and I plan to have a post later this summer with a number of new ideas.

CubeSats won’t replace traditional, much more expensive planetary spacecraft. Instead, they promise to give scientists new flexibility to have missions disperse instruments for distributed measurements or to send an instrument or two to carry out a job where the expense of a traditional mission doesn’t make sense. The MarCO mission will be the first step toward interplanetary CubeSats being used to explore the solar system.

Cube sized daughter probes would especially enhance flyby missions. They would separate shortly before encounter and could live on batteries and communication with its nearby mothership, during the few days of encounter. A flyby mission could thus image the object from all directions and even sample its atmosphere/plumes or impact its surface. I think that orbiters is an idea getting old. I hope New Horizons will prove me right.

In the text you have mentioned speed of transmission as "eight thousand kilobytes" which means something like 65 Mbps, but the infographics for MarCO states only 62 - 8000bps, that is lot of orders difference...

@Arbitrary -- Hi. Speaking form the 'old days' time frame, flybys are not a good use of resources. Orbiters, landers and rovers are what we need. Where a flyby would come in handy is as you described above. That's if you had no intention of studying that target you just passed but want a quick look. Your cubesat would glimpses of terrain that the flyby trajectory did not allow to be seen and the data could be relayed to the spacecraft for transmit back to ground later. Just to flyby a target repeatedly does not make sense. In the case of Pluto we were out of time and no budget levels needed for an orbiter to start with so we had to take a flyby. In this case the post launch discoveries out there gave us a chance for more discoveries to see beyond Pluto theory become reality.

Hi Van! Thank you for the detailed blog post. I've been following news of this CubeSat mission and appreciate your insightful perspective. More details about the propulsion system in the 2 CubeSats can be found here: http://www.cubesat-propulsion.com/jpl-marco-micro-propulsion-system/ . Also, have you seen this NASA video yet? https://www.youtube.com/watch?v=dS_Q7BFGuu0