A new version of the Dawn spacecraft is continuing the ambitious journey through the asteroid belt to uncharted distant worlds. Now holding a new solar system record, the probe is thrusting with its ion propulsion system, patiently and gently changing its orbit around the sun to match that of the immense protoplanet Vesta (and subsequently dwarf planet Ceres).

Even as Dawn continues pushing deeper into space, another spacecraft that used ion propulsion to conduct an exciting mission at a near-Earth asteroid has concluded. After traveling to and studying the diminutive Itokawa, Japan's Hayabusa spacecraft returned to Earth on June 13. This was long one of your correspondent's favorite missions, and he has joined many, many other enthusiasts in congratulating the team responsible for this impressive achievement.

When Dawn reaches each of its destinations, it will have a very full program of activities to acquire pictures and other scientific information. Brief overviews of some of its plans for Vesta were described in recent logs, and more will be presented later. To accomplish its mission of exploration, the spacecraft needs some enhancements to the capabilities it has been using for its travel through deep space to reach its targets. Those new capabilities are now onboard.

For the third time since it left Earth in September 2007, the spacecraft has received an upgrade of the software that runs in its primary computer. With a sense of grandeur and drama befitting this unique adventure, ever-poetical engineers fulfilled their dream of more than a year by denominating it "OBC flight software version 9.0." Revealing their surprisingly cute and playful nature, however, most Dawn team members prefer the hypocorism "9.0" (or "nine oh").

Engineers at JPL and Orbital Sciences Corporation began work on 9.0 almost immediately after 8.0 was installed on the spacecraft in April 2009. They continued with the careful and deliberate process of modifying the software until January, when the extensive test program commenced. It was crucial to verify not only that the new functions would work correctly but also that no unintended differences were introduced and that the existing capabilities were not compromised.

The latest software has 23 sets of changes from the previous version. Some of these are new methods of controlling the way the spacecraft will point its sensors at Vesta and Ceres in order to optimize the acquisition of data. Other modifications, based on experience gained in the ongoing operation of the spacecraft, improve its ability to handle certain potential anomalies on its own. In addition, just as 7.0 and 8.0 did, 9.0 corrects some bugs.

While it may seem quite elementary to load software into a computer that is in control of a spacecraft more than twice as far from Earth as the Sun, it actually turns out to be somewhat complex and delicate. Even in "quiet cruise," the computer is responsible for a great deal of activity onboard. The ion propulsion system was inactive, which is typical when the main antenna is pointed to Earth, but otherwise the computer was busy keeping all systems operating.

To install 9.0, controllers used exactly the same processes they followed for 8.0 in April 2009. It went quite smoothly again this time, right down to the on-time delivery of pizza to mission control during the first day of returning the spacecraft to its normal configuration after rebooting the computer. We know almost all readers accepted the advice offered last year to retain a copy of the log that presented the details of the 8.0 installation, but we happily include a link here for the convenience of the sole reader who did not and wishes to recall what is involved. (For all other readers, congratulations on the handsome profit you have realized on your investment in that previous log.)

As last year, controllers had run a few tests to verify the integrity of some critical components during the normal weekly communications sessions in the weeks leading up to the loading of the new software. On June 15, the spacecraft stopped thrusting on schedule, turned to point its main antenna to Earth, and kept it there rather than returning to the thrust direction a few hours later. That allowed operators to perform the rest of these detailed checks. After confirming that both the primary and backup computers were fully healthy, they transmitted the files containing the new software.

On June 16, with all stations in mission control at JPL reporting all subsystems were healthy and stable, and all systems at the Deep Space Network performing equally well, the command to reset the computer was radioed to the distant ship. The computer dutifully rebooted for the first time since the installation of 8.0 and began running with version 9.0. Whenever the computer reboots, it puts the craft into safe mode. The team verified that the new software was running smoothly and then initiated the process of guiding the spacecraft out of safe mode and back to its normal interplanetary cruise configuration. The schedule had allowed until June 24, but by June 18, the robotic explorer was fully prepared to resume its normal duties.

Because the software upgrade went so well, the Dawn project has decided to present this exciting offer: we will install a functional copy of 9.0 on your computer or smartphone at no charge. Simply place your device in the asteroid belt, send us the coordinates, and we'll do the rest.

On June 17, after the majority of reconfigurations had been completed and while all members of the team but the insomniacs and the spacecraft itself were slumbering, protective software that is always running onboard detected an increase in the internal friction in reaction wheel number 4. Reaction wheels are devices used to control a ship's orientation in the zero gravity of spaceflight. By electrically controlling the speed of these spinning units, the spacecraft can hold steady or rotate as needed. Dawn is outfitted with four reaction wheels, although it only uses three during normal operations. As we have seen before, operators let each wheel have its turn at being off for a part of the mission. The software that detected the friction in no. 4 responded correctly by powering that unit off. If only three wheels had been in use, it would have activated the unused wheel; but it was unnecessary to do so this time because, by coincidence, all wheels were operating, as is normal when the spacecraft enters safe mode. The team had been planning to turn reaction wheel 1 off later on June 17 as part of the reconfiguration. Instead, after taking some time to reassess the spacecraft's condition, they simply left wheel 4 off and continued with their plans, now using wheels 1, 2 and 3 instead of 2, 3 and 4.

Dawn resumed ion thrusting on schedule on June 24. As it continues propelling itself to Vesta, it does so with the recognition that it has accomplished a greater propulsive change in velocity than any other craft ever to leave Earth. Some spacecraft have experienced larger velocity changes through gravitational interactions with planets, but thanks to the extensive use of its extremely efficient ion propulsion system, Dawn surpassed the record for the greatest change in velocity under a ship's own power on June 5. 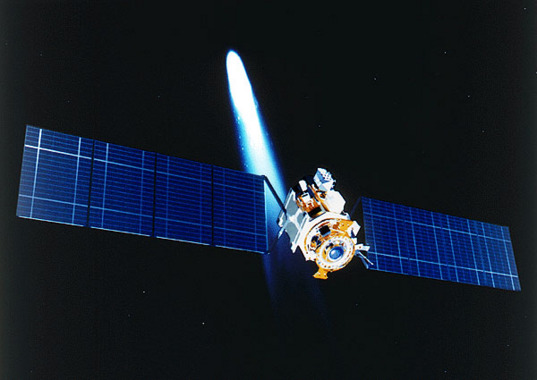 The previous record holder, Deep Space 1, was the first interplanetary mission to use ion propulsion. In its 11-month primary mission of testing advanced technologies (including ion propulsion), its two-year extended mission devoted to the exploration of a comet, and its final three-month hyperextended mission of additional technology testing, DS1 accumulated so much thrust time that it achieved an effective change in speed of 4.3 kilometers per second (9,600 mph). (As we have seen in several earlier discussions, such as here, this "effective change in speed" is not the speed at which the craft travels. It is a very commonly used way to express the effectiveness of a spacecraft's propulsion system that avoids the confounding effects of orbital mechanics.)

Having thrust now for 635 days, or 63 percent of its time in space, Dawn has attained a change of more than 4.4 kilometers per second (9,800 mph), and it has much, much more powered flight ahead.

The record itself and even the total velocity change, while perhaps fun, really are not important, however. They are convenient measures of the progress this ship is making on its ambitious expedition, one that would not have been possible without ion propulsion and other innovations. The exploration of the cosmos is not a competition; it is a shared undertaking of all humankind. Each mission, each record, each accomplishment, each discovery builds on the successes (and even the failures) of those that preceded it and helps pave the way for those that will follow. Together they all contribute to the advancement of our understanding of the universe and our humble place within it.