Dawn Journal: Taking Up Residence in the Asteroid Belt

Dawn continues to make steady progress on its journey through the solar system. The spacecraft has devoted another month to thrusting with its ion propulsion system, ever with its sights set on its rendezvous with Vesta in July 2011. While it will have other assignments along the way, propelling itself to the giant protoplanet deep in the main asteroid belt remains its principal responsibility.

The asteroid belt consists of innumerable objects in orbit around the Sun between Mars and Jupiter. (Dawn is aiming for the two most massive members of the belt.) Just as with a ball of cotton or a cloud, while there may appear to be a clear border when viewed from a great distance, a more careful examination reveals the asteroid belt to be less distinct. There is no sharp edge to demarcate the boundary. For example, although most asteroids keep to paths entirely between those of the two planets, the orbits of some bring them closer to the Sun than Mars. We can adopt a part of one common definition in which, to be designated as a resident of the main asteroid belt, an object's orbit can bring it no closer to the Sun than 1.666 astronomical units (AU). It is not coincidental that this is the greatest distance that Mars travels from the Sun. (Earth and its inhabitants never reach more than 1.017 AU from the solar system's gravitational master.) 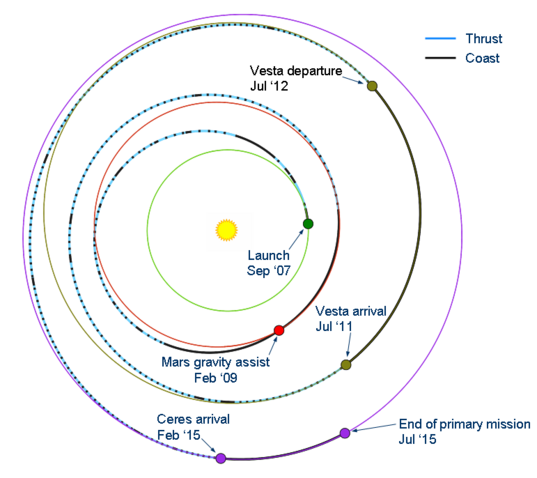 Dawn’s trajectory as of September 2009

As with Earth, Mars, and asteroids, Dawn's orbit around the Sun is elliptical. The principal difference is that the ship is constantly changing its course by emitting a high velocity beam of xenon ions. (It has racked up more than 10,000 hours of powered flight, with much more thrusting ahead.) In a lovely solar system dance in February, Dawn briefly partnered with Mars for additional assistance on its way as well. As we saw in the last log, the spacecraft's orbit grows larger as the mission progresses, bringing the explorer ever closer to its first destination. On November 13, it will enter the asteroid belt as its silent flight takes it past 1.666 AU from the Sun. It will remain in the belt for the rest of its mission and well beyond. Dawn will become a permanent inhabitant of that part of the solar system, the first emissary from Earth to take up residence in the main asteroid belt.

The probe has been here before. On June 30, 2008, it passed the outermost part of Mars's orbit. But its elliptical path reached its greatest distance from the Sun of more than 1.68 AU on August 8, 2008, and 40 days after that, it crossed the orbit of Mars again. On April 17, 2009, then at 1.37 AU from the Sun, its momentum began carrying it outwards once again. By then it was in a larger orbit, and thanks to the extensive additional orbital energy imparted to the spacecraft by its persistent ion thrusting, it will sail smoothly through 1.68 AU next month and continue deeper into the asteroid belt.

As Dawn continuously enlarges its solar orbit still more, mission controllers work diligently to ensure the distant craft remains healthy. They are also preparing to give it some additional tasks before the year is out, and inside sources reveal that these may be described in an upcoming log. In the meantime, emitting its eerie bluish glow, the probe silently streaks toward unexplored worlds, seeking to reveal new secrets and likely new questions as well.

Dawn is 1.25 AU (187 million kilometers or 116 million miles) from Earth, or 485 times as far as the moon and 1.26 times as far as the Sun. Radio signals, traveling at the universal limit of the speed of light, take 21 minutes to make the round trip.

P.S. Although Dawn works tirelessly in interplanetary space, the team on Earth is taking a break for Halloween. Observant readers have already noticed that this correspondent has dawned his costume, and it is a delightful and impressive disguise indeed. In an act of astonishing creativity, he is pretending to be someone who can write a (relatively) short log.