The Dawn mission remains on course as the spacecraft continues to thrust with its ion propulsion system, patiently, persistently, and gently changing its orbit to keep its appointment with protoplanet Vesta in two years. Meanwhile, closer to mission control and in stark contrast, brave firefighters work hard to protect JPL and the nearby homes of many of its employees and others in the community.

The probe has continued in "quiet cruise" since the last log. During this month, engineers did give the robot a few extra tasks to ensure it remains healthy, but these were routine. When each such assignment was conducted the first time or two that Dawn was in space, they were treated as special activities, with even greater diligence than is normally applied to the unforgiving and complex undertaking of flying a spacecraft far from Earth. Now however, the commands for these activities are stored onboard well ahead of time along with the routine commands for thrusting, communicating with Earth, and carrying out all the other functions the spacecraft normally conducts without the mission control team devoting extra attention.

Included in the maintenance procedures were instructions to perform a sequence of movements of the mechanism that points ion thruster #1, to power off reaction wheel #2 and return #1 to service, and to operate the gyroscopes for about 4 days. For readers who do not have their copies of the Dawn operations manuals handy, some information about these 3 kinds of operations was provided in a previous log.

Another event that is now considered routine occurred on August 15. For the second time this year, a particle of space radiation struck a particularly sensitive electrical component on the spacecraft, depositing enough energy to interfere with the operation of a circuit. When this happened in January 2008, it caused Dawn to enter safe mode, interrupting its other activities. Thanks to software the team transmitted to the ship later that year, now the interplanetary explorer is immune to strikes in that formerly vulnerable location.

As Dawn continues its long (in space and in time) solar system journey to match orbits with Vesta and later with Ceres, both of which reside farther from the Sun than the probe has yet traveled, some readers may note a surprising trend in the statistics for the mission. The famously unimaginative ending of each of these logs reveals that Dawn's distance from Earth has been diminishing since November 2008. Indeed, the probe's maximum separation from its planet of origin occurred on November 10. Today, it is as far from Earth as it was on June 2, 2008. By January 2010, it will be as close as it was in March 2008. Is this progress? 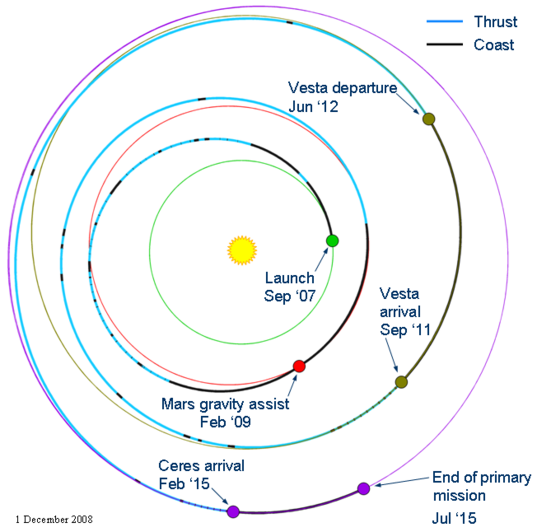 Earth and Dawn, each following its own path, are both in orbit around the Sun. As grateful residents of the planet know, their world's orbit doesn't change very much. The planet keeps following the same nearly circular path around the Sun year after year after year. Today Earth is about 1.01 astronomical units (AU) from the Sun, and it never strays very far from its average distance of 1.00 AU. As Dawn has traveled independently of Earth, thanks to the push from its Delta rocket, its orbit has been farther from the Sun than Earth's. The gradual effect of ion thrusting and the much more abrupt boost from Mars have caused that orbit to change considerably since then. To enter orbit around Vesta, Dawn will have to match the giant asteroid's orbit around the Sun, ranging from 2.15 AU to 2.57 AU. Today, Dawn is 1.53 AU from the Sun and headed outward.

As we saw a year ago (that is, one Earth-orbit-around-the-Sun ago), objects at different orbital distances travel at different speeds. The probe, orbiting the Sun at a greater range than Earth, travels more slowly, because the Sun's gravitational attraction diminishes with distance. So as Dawn heads slowly for Vesta, gradually spiraling away from the Sun, and Earth speeds around more quickly in its orbit, sometimes our planet moves closer to the spacecraft and sometimes it moves farther away.

In a continuing effort to offset the extraordinary cost of these logs with the handsome revenue from subtle product placements, we can refer to still another in the apparently endless line of Dawn clocks (many of which have been described in recent logs and all of which are available in the Dawn gift shop on your planet). On this clock, the minute hand is shorter than the hour hand. The motion of the former represents Earth, traveling closer to the Sun (at the clock's center) and more quickly. Dawn is at the tip of the hour hand, moving more slowly in its larger orbit. (We'll ignore for now that the hour hand should be growing in length, as the spacecraft recedes from the Sun.) Some of the time (such as between noon and about 12:30), the distance between the ends of the hands increases, but then the situation reverses; the faster minute hand begins moving closer and closer to the hour hand as the time approaches about 1:05.

Earth and Dawn are exhibiting the same repetitive behavior, albeit more complicated because of Dawn's ever-changing orbital speed and distance from the Sun. They will continue to draw closer until January, when Earth, coming from behind, passes Dawn and moves on ahead. The explorer will not need to take note however, as its sights are set on the asteroid belt.

So for readers tracking the distances reported in each log, don't despair. The continuously declining separation between Earth and its celestial envoy is a reflection of the elegant mechanics of the cosmos and not the result of inattentive engineers setting the spacecraft on the wrong path.

Next month, as Earth and the spacecraft continue their separate solar system dances, together with the Sun they will briefly make an attractive arrangement. On September 18, Dawn will be just as far from the Sun as it is from Earth, at 1.56 AU from each. Earth and the Sun will be 1.00 AU apart. The trio formed a very similar pleasing pattern last year. A triangle such as this, with two sides of equal length, is usually called "isosceles."

lthough there is nothing inherently significant for the mission about this alignment, we can use one more clock example to illustrate this isosceles triangle. In this case, we put Dawn at the center and Earth at the 12. (This clock may not be as useful for telling time as some of the others that are available, but it would still make a great gift.) The Sun would be next to the sixth little tick mark, where the minute hand would point at about 6 minutes and 15 seconds after the hour. (Note that this depiction of the geometry illustrates the angles and the relative separations of Dawn, Earth, and the Sun; hence, the clock may be any size. Several sizes are available in the gift shop, and we helpfully recommend the most expensive one.)

Not only is Dawn on course for the asteroid belt, on course for returning new and exciting discoveries from its enigmatic destinations, it is on a new and better course than it had been. According to inside sources, the vast team of writers specifically assigned to create the next log is already planning to explain what has changed and why. Just as all loyal readers, your correspondent is hoping for an interesting description of this improvement in the mission.