Powering its way through deep space, Dawn draws ever closer to dwarf planet Ceres. To reach its destination, the interplanetary spaceship gently reshapes its path around the sun with its extraordinary ion propulsion system. In about a year, the spacecraft will gracefully slip into orbit so it can begin to unveil the nature of the mysterious world of rock and ice, an intriguing protoplanetary remnant from the dawn of the solar system.

Even as Dawn ascends the solar system hill, climbing farther and farther from the sun, penetrating deeper into the main asteroid belt between Mars and Jupiter, its distance to Earth is shrinking. This behavior may be perplexing for readers with a geocentric bias, but to understand it, we can take a broader perspective.

The sun is the conductor of the solar system symphony. Its gravity dictates the movements of everything that orbits it: Earth as well as the other planets, Vesta, Ceres, and myriad smaller objects, including asteroids and Dawn. (Actually, the gravity of every single body affects how all of the others move, but with more than 99 percent of the entire solar system's mass concentrated in the gargantuan sun, it dominates the gravitational landscape.)

Whether it is for a planet or Dawn orbiting the sun, a spacecraft or moon orbiting a planet, the sun or other stars orbiting the Milky Way (the Milky Way galaxy, that is, not your correspondent's cat Milky Way), or the Milky Way galaxy orbiting the Virgo supercluster of galaxies (home to an appreciable fraction of our readership), any orbit is the perfect balance between the inward tug of gravity and the inexorable tendency of objects to travel in a straight line. If you attach a weight to a string and swing it around in a circle, the force you use to pull on the string mimics the gravitational force the sun exerts on the bodies that orbit it. The effort you expend in keeping the weight circling serves constantly to redirect its course, forcing it to curve; if you release the string, the weight’s natural motion would take it away in a straight line (we are ignoring here the effect of Earth’s gravity on the weight).

The force of gravity dwindles as the distance increases, so the sun pulls harder on a nearby body than on a farther one. Therefore, to remain in orbit, to balance the relentless gravitational lure, the closer object must travel at higher speed, resisting the stronger attraction. The same effect applies at Earth. Satellites that orbit very close (including, for example, the International Space Station, 250 miles, or 400 kilometers, above the surface) must streak around the planet at about 17,000 mph (7.6 kilometers per second) to avoid being drawn down. The moon, orbiting almost a thousand times farther above, needs only to travel at less than 2300 mph (about 1.0 kilometers per second) to balance Earth’s weaker hold at its remote location.

For that reason, Mercury zips around the sun faster than any of the other planets. Mars travels more slowly than Earth, and the still more distant residents of the asteroid belt, whether natural (all of them but one) or a product of human ingenuity (one: Dawn), proceed at an even more leisurely pace. As Earth makes its relatively rapid annual trip around the sun, the distance to the spacecraft that left it behind in 2007 alternately shrinks and grows.

We can visualize this with one of the popular models of clocks available in the Dawn gift shop on your planet, in which the hour hand is longer than the minute hand. Imagine the sun as being at the center of the clock. The tip of the short minute hand represents Earth, and the end of the hour hand represents Dawn. Some of the time (such as between noon and shortly after 12:30), the distance between the ends of the hands increases. Then the situation reverses as the faster minute hand begins moving closer and closer to the hour hand as the time approaches about 1:05.

Earth and Dawn are exhibiting the same repetitive behavior. Of course, their relative motion is more complicated than that of the clock hands, because Dawn's ion thrusting is constantly changing its solar orbit (and so the distance and speed at which it loops around the sun), but the principle is the same. They have been drawing closer since August 2013. Earth, coming from behind, is now about to pass Dawn and move ahead. The stalwart probe will not even take note however, as its sights remain firmly set on an unexplored alien world. 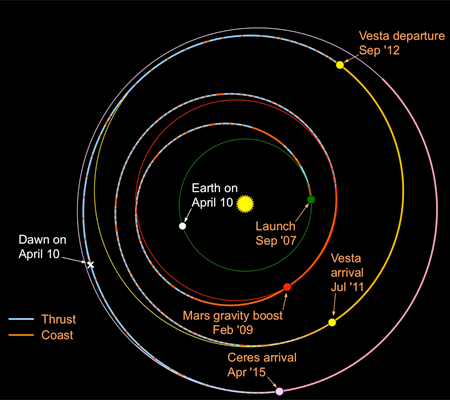 Dawn’s interplanetary trajectory from launch through its arrival at Ceres next year. The positions of the spacecraft and Earth are shown on April 10, 2014, when their independent orbits bring them relatively close together.

On April 10, the separation will be 1.56 AU (1.56 times the average distance between Earth and the sun, which means 145 million miles, or 233 million kilometers), an almost inconceivably large distance (well in excess of half a million times farther than the International Space Station, which orbits Earth, not the sun) but less than it has been since September 2011. (The skeptical reader may verify this by reviewing the concluding paragraph of each log in the intervening months.) Enjoy the upcoming propinquity while you can! As the ship sails outward from the sun toward Ceres, it will never again be this close to its planet of origin. The next time Earth, taking an inside track, overtakes it, in July 2015 (by which time Dawn will be orbiting Ceres), they will only come within 1.94 AU (180 million miles, or 290 million kilometers) of each other.

By the way, Vesta, the endlessly fascinating protoplanet Dawn unveiled in 2011-2012, will be at its smallest separation from Earth of 1.23 AU (114 million miles, or 183 million km) on April 18. Ceres, still awaiting a visitor from Earth, despite having first been glimpsed from there in 1801, will attain its minimum distance on April 15, when it will be 1.64 AU (153 million miles, or 246 million km) away. It should not be a surprise that Dawn's distance is intermediate; it is between them as it journeys from one to the other. 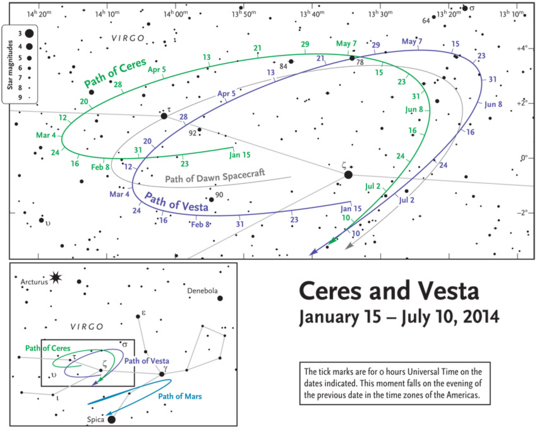 This finder chart can help you locate Vesta and Ceres (and even Dawn, although it is too small to see) in the constellation Virgo. Click it for a larger version.

Not only is each one nearly at its shortest geocentric range, but from Earth's point of view, they all appear to be near each other in the constellation Virgo. In fact, they also look close to Mars, so you can locate these exotic worlds (and even the undetectably small spacecraft) in the evening sky by using the salient red planet as a signpost. In July, the coincidental celestial alignment will make Vesta and Ceres appear to be separated by only one third the diameter of the full moon, although these behemoths of the asteroid belt will be 0.57 AU (52 million miles, or 85 million kilometers) from each other.

We mentioned above that by constantly modifying its orbit under the persistent pressure of its ion engine, Dawn complicates the simple clock-like behavior of its motion relative to Earth. On Halloween 2012, we were treated to the startling fact that to rendezvous with Ceres, at a greater distance from the sun, Dawn had to come in toward the sun for a portion of its journey -- quite a trick! In that memorable log (which is here, for those readers who didn't find every detail to be so memorable), we observed that it would not be until May 2014 that Dawn would be as far from the sun as it was on Nov. 1, 2012. Sure enough, having faithfully performed all of the complex and intricate choreography since then, it will fly to more than 2.57 AU from the solar system's star in May, and it will continue heading outward.

With the sun behind it and without regard to where Earth or most other residents of the solar system are in their orbits, Dawn rises to ever greater heights on its extraordinary expedition. Distant though it is, the celestial ambassador is propelled by the burning passion for knowledge, the powerful yearning to reach beyond the horizon, and the noble spirit of adventure of the inhabitants of faraway Earth. The journey ahead presents many unknowns, promising both great challenges and great rewards. That, after all, is the reason for undertaking it, for such voyages enrich the lives of all who share in the grand quest to understand more about the cosmos and our humble place in it.

Great article, can't wait to see Dawn at Ceres! BTW, Just checked, both Voyager I and II are sort of heading towards Earth now. :-)

Hi Marc At some point Dawn must start decelerating to be captured by Ceres. How close to Ceres is the flip- over point? And how much speed does Dawn have to lose? This must be elementary orbital dynamics. But ....

Thank you, Lepton. (I am principally baryonic. I have had chameleons named Hadron and Neutrino.) Alexander, there actually isn't a flip over. The unique properties of trajectories with ion propulsion are anything but elementary, and they can make our intuition about this mislead us. The entire thrust profile for years is designed to make Dawn's orbit progressively more and more similar to that of its destination. There is no special event or clear change in the thrust direction; rather, everything changes very gradually throughout the flight. I've written about various aspects of this before, including in my January blog. Dawn has about 2400 mph (1.1 km/s) to go from today to orbit capture.