Traveling confidently and alone, Dawn continues to make its way through the silent depths of the main asteroid belt. The only spacecraft ever to have orbited a resident of the vast territory between Mars and Jupiter, Dawn conducted a spectacular exploration of gigantic Vesta, revealing a complex place that resembles the terrestrial planets more than typical asteroids. Now the interplanetary adventurer is on its long journey to the uncharted dwarf planet Ceres, by far the largest of all asteroids (975 kilometers, or more than 600 miles, in equatorial diameter). In 2015, the mysterious world of rock and ice will begin to give up its ancient secrets to the immigrant from distant Earth. 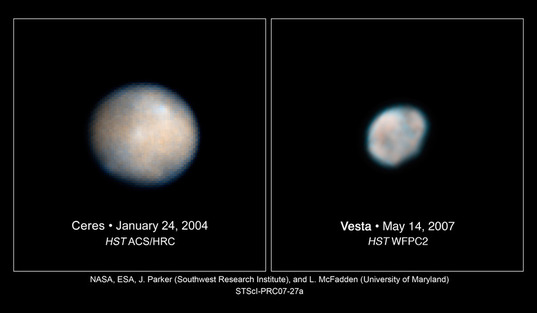 Earth, Vesta, Dawn, and Ceres are following their own separate paths around the sun. The spacecraft is patiently reshaping its orbit, using its uniquely efficient ion propulsion system to accomplish a deep-space expedition that would be impossible with conventional propulsion.

As we have seen in many previous logs (including, for example, here), the higher an object's orbit, the slower it needs to move in order to balance the gravitational pull, which diminishes with distance. Blistering Mercury orbits the sun faster than Venus, Venus goes faster than Earth, Earth goes faster than Mars, and Mars goes faster than the residents of the asteroid belt and the cold planets of the outer solar system. In the same way, satellites that orbit close to Earth, including the International Space Station, move faster than those at greater altitudes, and the moon travels even more slowly in its very high orbit.

Dawn is now a permanent inhabitant of the main asteroid belt. Therefore, the massive sun, the gravitational master of the solar system, has a weaker grip on it than on Earth. So as Dawn maneuvers from Vesta to Ceres, Earth revolves more rapidly around the sun. This month, their independent motions have taken them to their greatest separation of the year, as they are on opposite sides of the sun. How truly remarkable that humankind can accomplish such a feat!

On August 4, the planet and its robotic ambassador to the cosmos were an extraordinary 3.47 AU (519 million kilometers, or 322 million miles) apart. (To recapture the feeling of your position in the universe then, it may be helpful to know that the maximum range was attained at 4:16 a.m. PDT.) From the perspective of terrestrial observers, had they possessed the superhuman (and even supertelescopic) vision needed to descry the tiny ship far beyond the blindingly bright star, Dawn would have appeared to be very close to the sun but not directly behind it. To rendezvous with Vesta and then with Ceres, the spacecraft has tilted the plane of its solar orbit. Some of the time it is north of Earth's orbital plane, sometimes it is south. August 4 was during the northern segment, so Dawn would have been a little north of the sun.

It's time to refer to one of those novel clocks available in the Dawn gift shop on your planet (although if you already have such a clock, it probably doesn't tell you that it's time -- we stand by our policy of full refunds within 24 hours, as measured by our Dawn clocks). With the sun at the center of the clock, Earth's motion would be like that of a short minute hand. Dawn, both farther from the sun and moving more slowly, would be following the path of a longer hour hand. If we ignore the effect of the ion thrust, which is constantly changing the orbit, and the slight misalignment of the hour hand representing Dawn's being in a different plane, the conditions on August 4 were like those at 6:00.

As time progresses and Earth continues circling the sun, it will come closer to Dawn until April 2014 (like 12:00). Even then, however, they will be over 1.55 AU (232 million kilometers, or 144 million miles) apart, and they will never be that close again. The spacecraft will continue climbing higher and higher from the sun toward Ceres, so by the time Earth loops around once more, Dawn will be even farther from it. In the meantime, when next the arrangement is like 6:00, in December 2014, the separation will be more than 3.78 AU (565 million kilometers, or 351 million miles), even greater than the remarkable range a few weeks ago.

The tremendous distance this month between the spacecraft and the humans it represents provides a convenient occasion to reflect on the extraordinary nature of this ambitious mission of discovery, and regular readers know that we rarely eschew such an opportunity. Indeed, Dawn and Earth have been on opposite sides of the sun three times before (albeit not at the same distance), in November 2008, November 2010, and March 2012. In each case, we explained more about the nature of the alignment and contemplated the profundity of such an epic adventure.

Well beyond Mars, fewer than a dozen probes have ever operated as far from Earth as Dawn. Those interested in the history of space exploration (such as your correspondent) will enumerate them, but what should be more rewarding is marveling at the extent of humanity's reach. At this astounding range, the deep-space ship was well in excess of one million times farther from Earth than the International Space Station and Tiangong-1.

Some readers may have heard tell that in days of yore, a few fortunate humans traveled far from Earth. That was long, long ago, but tales pass from generation to generation, and even some dim memories survive. Apollo astronauts physically ventured to the moon, and many, many more people were along for the ride. Yet even in those ancient times of amazing escapades, no person reached farther than the moon does. But Dawn, built and operated by humans to take them where they themselves cannot (yet) go, was 1,300 times farther than the greatest distance attained by those primitive explorers. And as with Apollo, anyone can participate in this grand undertaking. This is a journey for everyone.

The scope is staggering and may not be possible to grasp fully. We evolved to have a clear understanding of distances that mattered to terrestrial creatures who had neither means nor need to comprehend much beyond their local environment. But now, thanks to the brilliance, persistence, meticulousness, creativity, and curiosity of our species, our reach extends to thousands of times farther than any individual has traveled. We do more than only aspire to extend ourselves from Earth. With our spacecraft, we create the means to transport ourselves throughout the solar system. Our handiwork visits places and shows us sights far, far, far beyond what could even have been imagined until recently. Powered by the noble spirit of adventure and the yearning for knowledge, our celestial emissaries carry us with them. Through them, as we behold alien landscapes, sometimes eerie in their familiarity yet more often eerie in their exoticism, but always beautiful and spellbinding, everyone who hungers for insights into the universe is nourished. Unbound by the planet on (or very near which) we reside, we take flight through space and time, and we are witness to spectacles of cosmic proportions dating back to the dawn of the solar system. With Dawn, we are able to reach beyond our humble home, indeed beyond ourselves. We learn much as we do, but we grow wiser even just for the effort itself.

This type of exploration cannot be anything shy of Bruce Murray's early days plans for exploration come to fact. The Dawn Team is doing fantastic work and Dr. Rayman is doing a superb job of keeping us armchair veterans informed and educated. Thank you Dr. Rayman for a job being well performed!