Dawn is making good progress on the second segment of its cosmic travels. Following more than a year of arduous but sensationally productive and exciting work revealing the fascinating character of the giant protoplanet Vesta, it is now patiently pursuing its next target, the mysterious dwarf planet Ceres, which resides farther from the sun. For the second (and final) time in its interplanetary journey, however, Dawn is about to turn around, going closer to the sun rather than farther away.

In August 2008, we saw in detail how it could be that even as the bold explorer travels outward in the solar system from Earth, past Mars, to Vesta, and then on to Ceres, it could occasionally appear to reverse course temporarily. We present here a shorter explanation for those readers who did not memorize the log explaining this perplexing behavior (you know who you are, and we do as well, but your secret remains safe under the terms of our reader privacy agreement).

Dawn orbits the sun, as do Vesta, Ceres, the other residents of the main asteroid belt, and the planets. All orbits, whether of these objects around the star at the center of our solar system, artificial satellites or the moon in orbit around Earth, or even Dawn when it was in orbit around Vesta, are ellipses (like flattened circles). Earth, for example, orbits the sun at an average distance of 150 million kilometers (93.0 million miles), which astronomers call one astronomical unit (AU). During its year-long revolution, however, our planet comes in to 0.98 AU from the sun and goes out to 1.02 AU. Earthlings manage quite nicely with these small variations. (Note that the seasons are not caused by the changes in distance but instead are a result of the tilt of Earth's axis and thus the differing angles at which the warming rays of the sun arrive during the year. If the sun's distance were all that mattered, the northern and southern hemispheres would have the same seasons.) So, orbiting bodies move smoothly between a minimum and a maximum range from their gravitational masters rather than remaining at a constant distance.

When Dawn was in orbit around Vesta, it accompanied that world on its regular journey around the sun. The table last month showing the probe's progress over the five years of its deep space trek reminds us that Vesta's path brings it as close to the sun as 2.15 AU and takes it out to 2.57 AU. 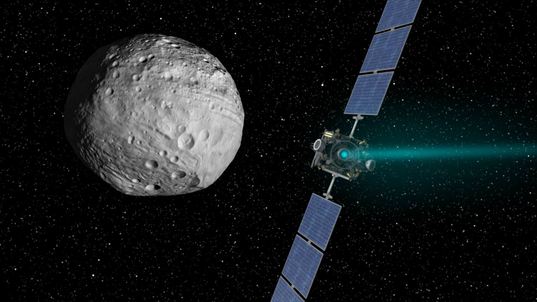 If Dawn had remained in orbit around Vesta, it would have continued to follow the same elliptical course as its host in the asteroid belt. The pair would have reached their maximum solar distance next month and then would have fallen back to 2.15 AU in September 2014. While visiting Vesta was extremely gratifying, this explorer's ambitions are greater. It broke free of Vesta's grip, its sights set on a new and distant alien destination.

Now the spacecraft is in its own independent orbit around the sun, and the persistent but gentle pressure of its advanced ion propulsion system gradually reshapes that orbit. At any moment, the orbit is an ellipse, and an instant later, it is a slightly different ellipse, courtesy of the thrust. As Dawn departed from Vesta only last month, its orbit is not yet dramatically different, but over the course of the coming years, the effect of the thrusting will be to change the orbit tremendously. To reach Ceres in 2015, the ship will enlarge and tip its elliptical course to match the motion of the dwarf planet around the sun. (Some of the parameters characterizing each object's orbit are shown here.)

Although the ship's orbit is growing, it will reach the current high point on Nov. 1. It will then be 2.57 AU from the sun and, just as in 2008 (albeit at a smaller distance), it will begin moving closer, even as it continues to thrust.

If Dawn stopped thrusting on Nov. 1, its elliptical orbit would carry it down to 2.19 AU from the sun in September 2014. That's a higher orbit than Vesta's but still well below what it needs to be for the rendezvous with Ceres. Astute readers have already anticipated that the plan is not to stop thrusting but to continue reworking the trajectory, just as a ceramicist gradually achieves a desired shape to create the envisioned artistic result. The ongoing thrusting will raise the low point of the orbit, so if the ship follows the flight plan, it will descend only to 2.45 AU in October 2013 before sailing outward again. By May 2014 it will have risen to the same solar altitude as it is now. All the thrusting in the interim will have altered its course so much, however, that it will not turn around then; rather, it will continue ascending to keep its 2015 appointment with Ceres.

If not for its ion propulsion system, this extraordinary interplanetary expedition would be impossible. Conventional chemical propulsion does not have the requisite capability. The key to taking advantage of the unique performance of ion propulsion is patience, which Dawn demonstrates exemplarily. Whereas the vast majority of spacecraft spend almost all of their time coasting, Dawn devotes the preponderance of its time to powered flight, emitting a tenuous but very high velocity beam of blue-green xenon ions to propel itself. On Nov. 2, coincidentally around the same time it begins approaching the sun, the indefatigable robot will exceed three years of total thrust. By then, the gentle but persistent flow of ions will have imparted the equivalent of 7.28 kilometers per second (16,300 miles per hour) to the spacecraft. (As we have seen in many previous logs, such as here, this is not actually a measure of Dawn's speed. It is a convenient description of the effectiveness of a propulsion system that avoids the complications of orbital mechanics. The effect of the propulsion is not to increase velocity but rather to climb the solar system hill, just as pressing a car's accelerator while on a steep slope may not gain speed compared to driving on a level road, but it will gain elevation.)

As the ambitious adventurer forges through the asteroid belt, pushing tirelessly against the sun's incessant pull, the temporary reduction in heliocentric distance is just one element of the complex plan for a grand adventure to explore two of the last uncharted worlds in the inner solar system. Next month, we will see some of the changes the mission control team is making in how Dawn operates in order to ensure its work at Ceres is as richly productive as it was at Vesta.

P.S. Last year's Halloween costume was so difficult to wear that your correspondent will don a new one that's a little easier yet makes him equally unrecognizable and is much more whimsical. (No, it's not his ballerina outfit, as he wears that too frequently for it to be a good choice for Halloween.) This year, he is going as someone who believes the Higgs boson mass is greater than 140 GeV, which surely will amuse and delight everyone fortunate enough to see such a dazzling costume.