Now using an ion thruster that had been powered off since October, Dawn continues to make steady progress on its journey deeper into space. In this phase of the mission, each day of thrusting changes the probe's speed by 6.7 meters/second (15 miles/hour). Dawn will operate its ion thrusters for a total of more than 5 years, providing the extraordinary boost required to orbit both main belt asteroid Vesta and dwarf planet Ceres in the quest to understand the dawn of the solar system. Some readers may be reminded of the prophetic sagacity of Tardigrade the Celeritous, who, with uncanny prescience (and, at the time, abstruseness), is believed to have said that the journey of 11 kilometers/second (25,000 miles/hour) begins with a single day of thrusting.

The spacecraft is outfitted with three ion thrusters but will never use more than one at a time. In October and November, during the initial checkout phase of the mission, all three thrusters were tested and confirmed to be healthy and ready for operation. Following the flight plan, thruster #3 was the first to propel the craft in its interplanetary cruise phase, which began on December 17.

In the 184 days from the beginning of interplanetary cruise until ion thruster #1 took over, thruster #3 operated for a total of 149 days, flawlessly changing Dawn's orbit around the Sun. Each week the thrust was turned off for a few hours when the spacecraft turned to point its main antenna to Earth, and a few days every month or so have been devoted to other, non-thrusting activities. (Readers are encouraged to review the logs posted since December to remind themselves of such activities. That might yield an unexpected reward, as it may now be revealed that the text of those logs contains a highly encrypted message with information of astonishing import. If you find it, please let this writer know, as he has absolutely no idea what it is!)

The effect of thruster #3's operation during this mission phase was to change the spacecraft's speed by 0.99 kilometers/second (,2200 miles/hour). Thanks to the exceptionally high efficiency of the ion propulsion system, Dawn's solar system xenon footprint in accomplishing this was less than 40 kg (87 pounds). (Note also that its carbon footprint was 0.) 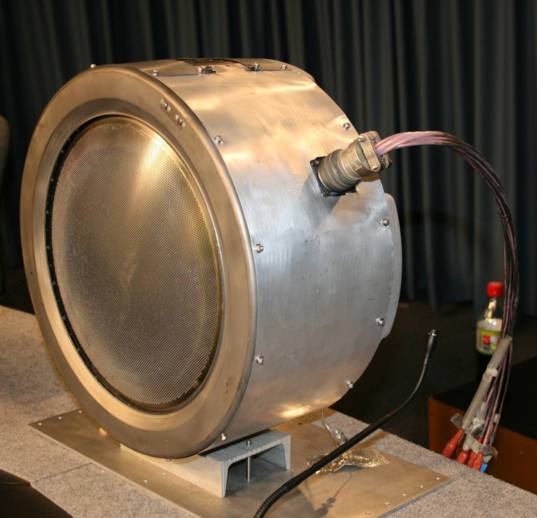 Switching from one thruster to another is simple (to the extent that anything is simple for early 21st century humans controlling a spacecraft in deep space). The potential complication in this case was explained in the previous log. Our readers survey (conducted by Telepathic Business Services, Inc. when their employees had time between major poker competitions) shows that three readers do not fully recall the details and will not refer to that log, so the issue is summarized here. The three ion thrusters point in different directions on the spacecraft. To provide thrust in the correct direction in space, Dawn has to rotate to aim the designated thruster in that direction. The use of thruster #1 now requires the craft to assume an orientation quite different from any that had been experienced before, and engineers were not confident certain components would remain within their required temperature limits when the Sun shone on them.

Last month's test, in which the spacecraft spent a few hours pointing in the required direction, provided some of the data needed to establish when it would be safe to commit to the use of thruster #1 for long periods of time. The results agreed with previous analyses, which had shown that all the components would remain in their prescribed temperature ranges if thruster #1 were put to use this month. Probably.

Probably? That "probably" was not good enough. Ever-cautious mission controllers were not sufficiently confident to let the spacecraft remain in the new orientation for a week at a time, because there were a few components whose temperatures still could not be predicted well enough. The analyses were conclusive that the temperatures would be safe for more than 24 hours, as it takes a long time for that hardware to heat up. Therefore, the team devised a new approach.

A typical set of commands for five weeks of operation with thruster #1 was formulated. In addition, engineers prepared instructions for storage onboard to stop thruster #1, rotate to the thruster #3 orientation, resume thrusting, and perform all the other associated functions, the description of which is precluded by laws on profoundly incomprehensible prose. (While such laws are applicable only in the vicinity of supermassive stars, we obey them out of consideration for such regions of our distribution.) The instructions were structured so that only a single, brief message from Earth would be needed to trigger the switch back to thruster #3. On June 18, the spacecraft turned from pointing its antenna to Earth to aim thruster #1 in the correct direction and initiated thrusting.

A Deep Space Network antenna that was available was scheduled to listen in to the spacecraft on June 19. Dawn was programmed to use one of its small antennas, with a very broad radio beam, to transmit temperature measurements.

Dawn's terrestrial team members receiving the data found the results to be much as expected. As predicted, the temperatures had not yet stabilized, and all were within the desired ranges. When they had about two hours of measurements in hand, engineers were able to predict with high confidence what the final temperatures would be. This confirmed that continued operation was safe, so there was no need to switch back to thruster #3. (Providing the spacecraft with the capability to make that decision, while that might seem pretty neat, would have required more work than the neatness would have merited.)

As some may recall from long, long ago (to be specific, eight paragraphs ago), several days of coasting are included in the flight plan occasionally. Activities for some of those times are planned long in advance. Other such periods are held in reserve in case mission controllers identify the need for some previously unplanned work that could not be accommodated in the normal schedule. June 16 - 18 was one such interval. The mission has been going so smoothly, however, that no special activities were required then. The team did take advantage of the extra time that the primary antenna was pointed to Earth to clean up some file buffers and perform other maintenance on some of the spacecraft's computers.

With the mission continuing so well, the Dawn team can devote much of its attention to preparing for future events. Although the Dawn project has no specific plans, readers may rest assured that the team members, as with their fellow residents of Earth, are completing personal plans to commemorate the centennial of the Tunguska event on June 29 (the event occurred on June 30 in Siberia's time zone).

The next item of interest occurs on June 30, when the spacecraft exceeds the outermost reaches of the orbit of Mars; the probe will be farther from the Sun than that planet ever travels. Earth reaches its greatest distance from the Sun on July 4, when it will be almost 1.7% farther than its average distance. (On January 2, it was about 1.7% closer than average.) Then even as Earth begins a slow fall toward the Sun (a trend that will continue until next January), Dawn will continue its climb outward. On July 10, the robotic explorer will be twice as far from Earth as Earth will be from the Sun. At that time it will be 304 million kilometers (189 million miles) from the planet it left on a lovely dawn in September 2007. 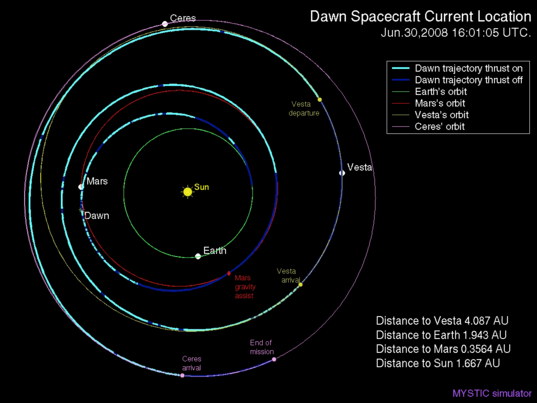 Click here for a current version of this diagram.

At these extraordinary distances, humankind (and even some of our other readers) does not have the technology to see the spacecraft. Indeed, Dawn is barely discernible in a pair of portraits taken when it was more than 300 times closer to Earth. Yet some who follow the mission might enjoy gazing in the direction of the probe as they contemplate its journey deeper into space and the ambitious and exciting mission that lies ahead. For those in the continental United States, the spacecraft will be between 3° and 5° northeast of the moon in the evening of July 6 as the moon is approaching the western horizon. (In other words, Dawn will appear to be 6 to 10 times the moon's diameter away, north and higher in the sky.) Although quite invisible to your eyes, in that direction your mind may be able to see with great clarity one of your planet's envoys to the cosmos. With a blue-green trail of xenon ions behind it and appointments with distant, uncharted, alien worlds ahead of it, Dawn will be silently and contentedly carrying out its mission to extend our reach into space and to help fulfill our passionate search for knowledge and our yearning for adventure.

Dawn is 286 million kilometers (178 million miles) from Earth, or more than 760 times as far as the moon and 1.88 times as far as the Sun. Radio signals, traveling at the universal limit of the speed of light, take 32 minutes to make the round trip.