Good news from Russia today: after 20 years of development they have finally launched their RadioAstron satellite (the official name is Spektr-R) into a high elliptical orbit around Earth.

We congratulate the Russian team on this launch and wish them success with the mission. RadioAtron was launched on a Zenit rocket with a Fregat upper stage boosting it to the higher orbit. This Zenit/Fregat combination is the same as the one that will launch the Phobos-Grunt mission later this year. Phobos-Grunt is, of course, the sample return mission on which The Planetary Society's Living Interplanetary Flight Experiment (LIFE) will fly. We are mighty happy about this launch, since the Russian space establishment considered a successful RadioAstron launch to be a necessary prerequisite to the launch of the Phobos mission. 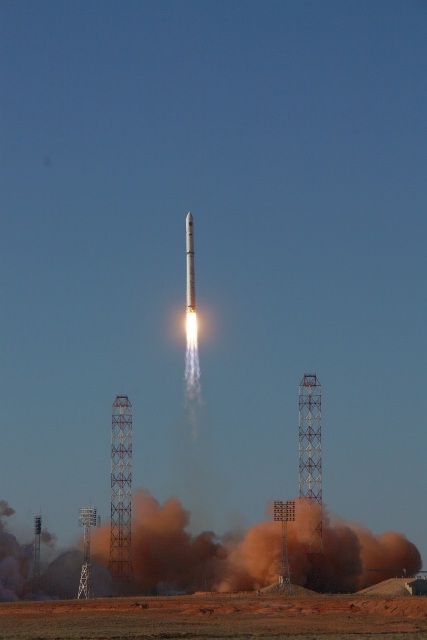 At 0231 UTC on July 18, 2011, the Spektr-R radio observatory launched on a Zenit rocket from the Baikonur Cosmodrome in Kazakhstan.

As the name indicates, RadioAstron will make radio astronomy observations deep into the universe. RadioAstron's large, 10-meter space radio telescope will work as part of a very long baseline interferometery (VLBI) network with ground-based radio telescopes. Its development has been led by Academician Nikolai Kardesheev at the Astro Space Center of the P.N. Lebedev Physical Institute of the Russian Academy of Science. The spacecraft was built by the Lavochkin Association, part of the Russian space agency.

NASA and other space agencies are cooperating with Russia on RadioAstron, although NASA gave up plans to be a major participant on the project due to the very long delays in its development. Although some of the instrumentation on board is now old, containing pre-1990s technology, scientists still hope to make high angular resolution measurements relevant to cosmological questions of dark energy detection and observations of supermassive black holes and neutron stars.