NASA's Nanosail-D spacecraft surprised everyone, including its controllers, by suddenly deploying from its parent FASTSAT spacecraft and beginning its mission in space. NASA is providing a live look at the mission's status at http://nanosaild.engr.scu.edu/dashboard.htm. 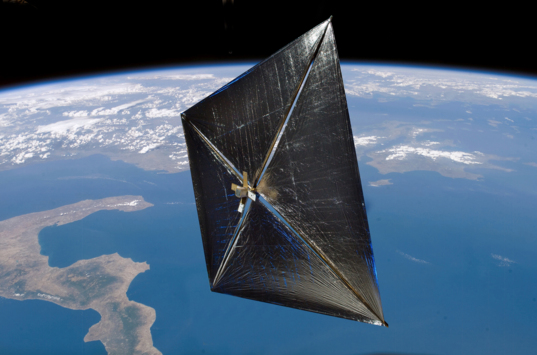 Artist concept of a solar sail in space

We at the Planetary Society are of course very interested in the Nanosail mission, since its design formed the basis for our LightSail 1. Reports this morning say that the sail has deployed, which is great news! We wish the spacecraft and its mission team well -- and look forward to hearing more.

Nanosail's orbit is reported to be at an altitude of 560 kilometers, where drag forces dominate solar pressure. The mission is designed to test use of sails as atmospheric brakes for deorbiting satellites rather than flying as a solar sail.

The Planetary Society's LightSail 1 and its twin back-up craft are being built now. While work has been delayed because of manufacturing problems with the TRAC booms (similar to those used on Nanosail but twice as long), we are told we will have them within a few weeks. Once we get the booms, we will be able to complete both spacecraft in a few months. We're still searching for a launch opportunity for LightSail 1. We need a launch that can take us above the minimum 825 kilometers, where we can fly as a solar sail by increasing the orbital energy. Several possibilities are being pursued, but none, yet, before the end of this year.