In mid-October, I attended the First Moscow Solar System Symposium. Its focus was mostly on Phobos science and plans for next year's launch of the Phobos Sample Return Mission (also known as Phobos-Grunt), on which The Planetary Society will be flying the Living Interplanetary Flight Experiment. The Phobos Sample Return Mission (PhSRM) will also carry a Chinese Mars Orbiter, Yinghuo-1: the first interplanetary spacecraft of China.

The preparations for a 2011 launch of PhSRM appear to be going well. With more than a year remaining before the planned launch, all of the hardware is complete and assembly and tests are now underway. The mission is scheduled to launch on a Zenit-2 rocket in November 2011 from Baikonur, Kazakhstan. 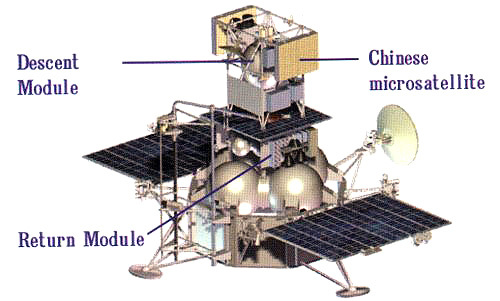 The nominal timeline planned for the mission is as follows:

The total spacecraft weighs more than 13 tons and includes a large propulsion system for all the orbital maneuvers and the return to Earth as well as the large lander to operate on Phobos. The lander has a science payload of 50 kilograms, with 15 instruments plus two manipulator systems to grab the sample(s) from Phobos. The return capsule weighs 11 kilograms, and the sample size is 200 grams. This means that 13 tons will lift off from Earth to return an 11-kilogram capsule containing 200 grams of Phobos!

The return capsule will also include our 89-gram LIFE module and two similar containers from the Russian Institute of Biological Medical Problems with different micro-organisms.

The Chinese Yinghuo-1 Mars orbiter weighs 115 kilograms and will piggyback on the PhSRM for insertion into 800 by 80,000 kilometer orbit at Mars. Yinghuo-1 will be delivered to Russia (NPO Lavochkin) in December 2010. The full PhSRM spacecraft will then undergo final assembly and tests in the first half of 2011, prior to delivery to the launch area in September 2011.

All-in-all, it appears that PhSRM will be ready for launch in 2011.