The IKAROS spacecraft continues to perform its mission well as its team at the Japan Space Exploration Center moves closer to the first fully controlled solar sail flight. They have now released the second of their two deployable cameras (one news report called it a disposable camera, which I suppose is also true) which took this excellent picture of IKAROS. 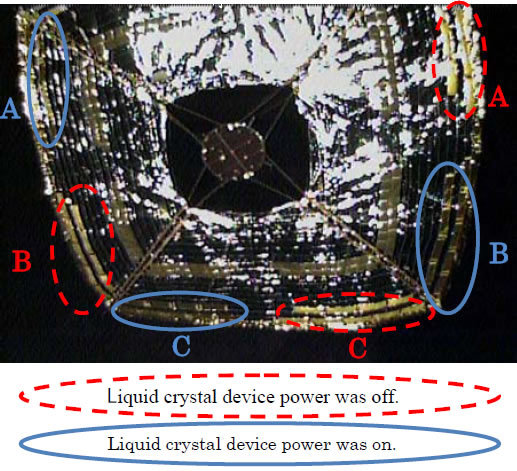 This photo of the sail hovering in space fills me with awe.

Embedded in the sail material are both solar cells for generating solar power and liquid crystal devices (LCD), which can be electrically turned on and off. When the power is on, the sunlight reflection is specular (as in the blue circle in the picture) and when off, the reflection is diffuse (in the red dotted circle). The diffuse reflection causes the area to look white while the specular reflection causes it to look dark. The different reflections create different forces and allow the sail to be turned in a controlled direction, using only sunlight. The team plans to synchronize the LCD on and off with sail spin during the attitude control experiment.

The solar cell power output is also being monitored during the mission -- the success of the power generation will determine the feasibility of combining the solar sail with an electric engine to provide additional propulsion capability for outer planet missions. More information is available on the JAXA website >>