A Martian Has Died

The last words Ray said to me were, “Yes, I will shout HURRAH!” I was visiting him at his home and had spent a hour or so talking with him about our favorite subject, Mars, as well as reading to him a couple of his own poems. His answer, “yes,” was to my question about whether I could come back and record a video-greeting from him to a Planetary Society crowd at PlanetFest 2012, celebrating the landing of the Mars Science Laboratory in August. We were supposed to do that recording last week – but Ray instead went to the hospital. Yesterday he passed away at the age of 91.

This touches us deeply, because Ray was a major part of The Planetary Society and his life and ours were much intertwined. He took us to the future where he said, “We are the Martians.” Although his long life was replete with an enormous repertoire and a myriad of accomplishments and subjects, it was inspiring us about Mars for which he will most be remembered and for which he was, I think, proudest. After all, he got to imagine it and then witness the exploration – and today, thanks to members of The Planetary Society, his Martian Chronicles is actually on Mars in an archive awaiting future explorers to the Phoenix spacecraft landing site. We created the DVD anthology, Visions of Mars, and arranged for its delivery to the Red Planet. You can read the brief introduction to Ray’s Martian Chronicles that appears on Visions of Mars here.

I first had the idea of Visions of Mars as a tribute to the three giants of science fiction literature who helped Carl Sagan, Bruce Murray, and me get the Society started in the early 1980s. I called them ABC: Asimov, Bradbury, Clarke. They urged us to form the Society because no one else was doing anything about planetary exploration after the Viking mission (which landed in 1976), and they agreed to help us with personal appearances, writing, and even donations. Ray was a close personal friend of Bruce Murray, while Bruce was Director of JPL, and they and their wives frequently got together to discuss the future of Mars exploration. Eventually I, too, became a friend and even on my last visit, Ray and I were talking about the same old subject – convincing the politicians of the joys and benefits of exploring Mars.

I spoke today with Bruce Murray about Ray and he of course was deeply saddened by the news. He said, “Ray was a very special person and a giant of his time.” Bruce went on to mention how good a friend he was both personally and to The Planetary Society. We remembered many conversations with Carl, Ray, and our other early science fiction advisors about the interplay of science and science fiction and how they both represent the enormous public interest in the adventure of space exploration. That public interest was the premise for the Society’s formation.

There are many Planetary Society events I can recall with Ray – in recent years they were more celebratory; in earlier years they were actually livelier. We had panel discussions, in which Ray got heckled for bemoaning that women don’t read science fiction, and theatrical events, including one that even starred his good friend, Charlton Heston. We presented Ray with what we thought was the world’s biggest birthday card, collecting thousands of names on the Internet and putting them into a scroll accompanying a gorgeous photograph of the Martian surface. This event coincided with Mars' closest approach in millennia in 2003. It was a great night. 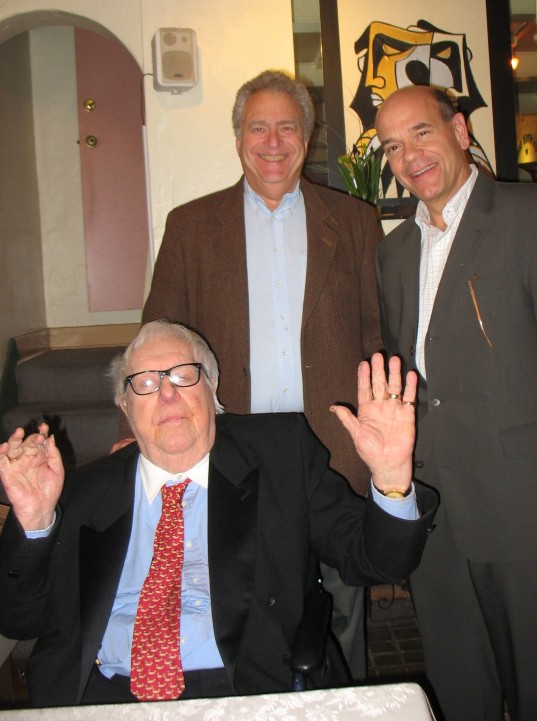 We were part of another birthday celebration for Ray at the City Council Chamber of Los Angeles when the City proclaimed Ray Bradbury Day, and I introduced a resolution from The Planetary Society for their proclamation.

In later years, Ray focused on poems and plays only a few of which had space exploration themes. But, everywhere he went, the Mars connection dominated. I tried to get Ray to come with me to Russia once because he is almost as popular there as he is in the U.S. But Ray was a global figure who travelled very little. His writings (and speeches) whether about Mars or any other subject inspired optimism and hope for a creative and better future and resonated well in many languages. When he got bad news – like cancellation or failure of a Mars mission – he immediately focused on the future: “let’s get on with it,” he would say impatiently when others were wringing their hands or dithering about next steps. He took that same attitude about his own work – if someone didn’t want to produce his play fast enough, he did it himself – and sold out the house with audiences who loved his work.

It was that optimism that manifested itself by promising to shout “HURRAH” for the upcoming Mars landing this summer even as we both bemoaned the crazy science cuts in the US budget for planetary exploration and wrung our hands about the complexity of successful landing of the huge Curiosity rover. He was optimistic – so am I. I’d be willing to jump the gun and declare we should name Curiosity's landing site the Ray Bradbury Memorial Station. I know NASA will have to form a Committee to consider that – but as Ray would say, “just get on with it.”

We will miss Ray, but a lot less than you might think – his words fill the ether and will always inspire us all who want to explore new worlds.

Yes, please lets rename to Ray Bradury Memorial Station. Whatever steps need to be done lets do it for him. Thanks.

Mr. Bradbury was my friend and mentor, and I've spent the last several months reading his classic works to him at his bedside. I spoke at his funeral, and an excerpt from my memoir about the things I've learned from him appears as the cover story of the current issue of Rosebud magazine. I've attended and enjoyed many Planetfests. The question I want to ask is: Is there any kind of Bradbury tribute being organized in connection with the landing of Curiosity in August? A Bradbury panel discussion would be a treat for the public, and might add another romantic dimension to the program. I know firsthand how genuine Ray's interest in planetary exploration was, and it's a passion I've always shared. Yet when I speak with young people about Mars (and I do!), what they often fail to comprehend is the "why." Why should they get excited? Why should they care about some rocks and a bit of dry ice? I don't have to explain how frustrating it is to see such waning interest. We need to remember the words of authors like Asimov, Bradbury and Clarke, and we need to cultivate their attitudes in new generations of writers, artists and engineers. The last time Ray experienced The Martian Chronicles was from my own lips. I am compelled by my debt. I'm no engineer--and only a novice writer--but I've got connections in event management and I know a thing or two about putting together a moving audio-visual presentation. Any assistance I could provide at this late hour in the mounting of a Bradbury event would be gladly given. "Mars and the Heart of Man" would be a good title, don't you think? A nod to the book and panel that were assembled (in connection with Mariner 9) 40 years ago by Bradbury, Sagan, Clarke, Murry et al. I've been reminiscing with Greg Bear this evening, and I think he might be up for it. The real challenge would be in keeping the list short! Naturally, if a tribute to Ray has already been arranged, or if the many good people at your disposal already have such matters well-in-hand, I remain your enthusiastic supporter, Bill Goodwin

What would it take to get a large solar system feature named after him? Not just the landing site of Curiosity but a large crater on Mercury or Mars?