The 4-meter booms pulled out the 5.6 x 5.6 meter sail in a test of deployer hardware and software, boom and sail packing, and mechanical operations. Project manager Jim Catrell and I were both on-hand with the Stellar team to observe the test.

One of the great advantages of our nanosat design is that we can take advantage of our "build and test" and "test and build" philosophy. This was the first full-scale test, and we learned a great deal from the deployment. There were glitches, but at the end the sail was fully deployed. We even got a chance to test the sail rip-stop due to accidental mishandling after the deployment. The sail held up perfectly -- a reassuring statement of its robustness.

The boom deployer control had several starts and stops but finally deployed the full length. The deployer issues -- both the hardware and the software -- are now being analyzed. We also conducted an experiment of reefing the sail, taking advantage of our motor's capability to retract the boom.

The team will make some small hardware and software modifications based on our test experience, after which, we will perform additional deployment tests. 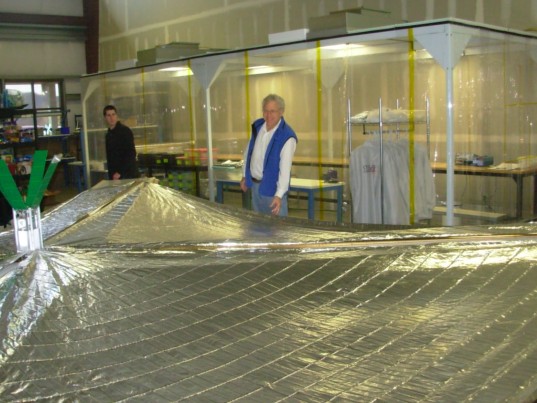 Chris Biddy (left) and Lou Friedman at Stellar Exploration for the first full-scale deployment test of the sail on LightSail-1.

I have mission certificates for the Lightsail mission deployed on March 4, 2011c.e.