Update from the Conference on NEO Law and Policy

My career in planetary exploration has taken me to many remarkable locales -- alas, all on Earth, none in space. I've been to the Arctic, the Antarctic, Siberia, Alaska and many places in between. Nonetheless, I am surprised to find myself in Nebraska -- at a Law School conference!

I'm attending a conference on the legal and policy implications of planetary defense -- the business of protecting Earth from external threats, most notably a possible impact by a near-Earth object (NEO) (an asteroid or comet whose orbit brings it close to Earth). I'm here with approximately 40 specialists discussing the question: Whose job is it, anyway?

The Planetary Society is big into this subject. We've been funding observers finding and tracking NEOs for more than 25 years, before NASA would even approve a program for observations of NEOs.

The Society is participating in both big NEO meetings happening this week: I chose the Nebraska meeting happening today and tomorrow, and Bruce Betts, the Society's Director of Projects, will represent us in Granada, Spain next week.

I arrived at the meeting just in time to hear former Apollo astronaut Rusty Schweickart use a baseball analogy to describe the key factor making it necessary to confront the policy implications of asteroid deflection. That is -- knowledge. If you are a batter at home plate and blindfolded while a group of kids in the outfield are throwing rocks at you -- you won't do anything, yet there is a high probability no rocks will hit you. But if you take the blindfold off -- as we are now doing by discovering more and more NEOs -- you now know the danger and will try to take evasive action. 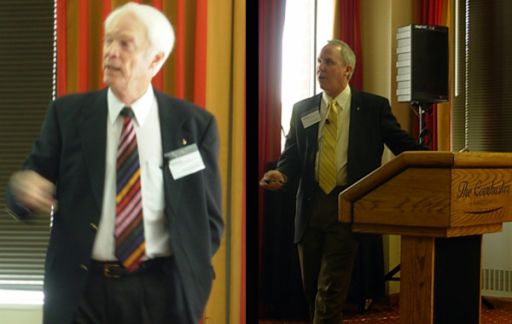 Schweickart and Jones at Conference on NEO Law and Policy

usty Schweickart (left) and Tom Jones speaking at the University of Nebraska College of Law Conference on NEO Law and Policy, April 2009.

t is a certainty that we will discover a NEO headed toward Earth, which is why lawyers and scientists and the public need to prepare -- hence, the reason for this conference.

Imagine the space rock headed our way is one of the many smaller NEOs that would only cause regional damage (like the one that hit Tunguska, Siberia one century ago). Certainly the nation in the threatened region would want to deflect the asteroid, even in the face of uncertainty. If it is too late to deflect it slowly, they might even want to use a nuclear explosion to deflect it. But any deflection will move the asteroid and may threaten some other region on Earth. Would the U.S. or Europe say "O.K." if China sends a nuclear bomb to deflect an asteroid to impact somewhere to the west, or vice versa? Even if one intends to deflect a NEO away from Earth, there is some probability that it will work only half as well as planned.

Issues like these are why we need to consider legal and policy implications and develop an international protocol and mechanisms for international cooperation with NEOs -- for information and for action.

Planetary Society advisor and astronaut, Tom Jones, reported on the Association of Space Explorers (ASE) NEO studies and workshops. ASE, the international organization of astronauts and cosmonauts, is leading the effort to develop a UN treaty and other international mechanisms about asteroid deflection. Their report is available on-line http://www.space-explorers.org/ATACGR.pdf. The Society and ASE -- both members of the UN Committee on Peaceful Uses of Outer Space -- have been working together for 20 years, creating various public information programs and now working on this NEO issue.

Jones and Schweickart both emphasized the real problem is that no organization has been assigned or taken on the responsibility of dealing with threat of NEOs.