SpaceX's Grasshopper rocket passed its most ambitious test yet with flying colors last week, rising 12 stories into a cloudless Texas sky before hovering and settling gently back down onto its launch pad. It was the third flight of the prototype launch vehicle, which SpaceX hopes will lead the company to spaceflight's holy grail: a fully-reusable rocket system.

While SpaceX did not post a press release for the December 17 flight, details provided in a YouTube video said the Grasshopper left the ground for 29 seconds and reached an altitude of 131 feet (40 meters). The test vehicle is a modified Falcon 9 first stage powered by a single Merlin 1D engine, an upgraded version of the 1C engines that have launched two successful Dragon capsule cargo runs to the International Space Station. The production reusable Falcon 9 will have nine Merlin 1D engines, but only the center will be used during landing.

Elon Musk tweeted a few pictures from the flight, pointing out a six-foot cowboy mannequin that his team had installed on the base of the rocket to provide a sense of scale.

"Cowboy riding the rocket no problemo," he said in one tweet. 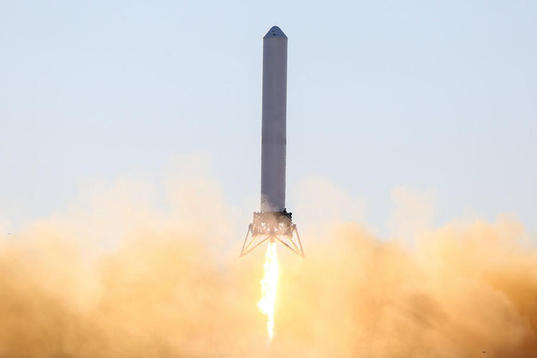 SpaceX's Grasshopper rocket prototype hovers above the launch pad during a 29-second test flight on December 17, 2012. The silhouette of a six-foot cowboy mannequin can be seen at the lower-right of the rocket for scale.

The Falcon 9 currently sheds its first stage three minutes into flight. Like other expendable rocket stages, the spent canister and its engines tumble back to Earth, ultimately meeting their demise in the Atlantic Ocean. However, as shown in a video released by SpaceX last year, the reusable Falcon's first and second stages will fly back to Earth for powered, upright landings. While the video is not necessarily accurate in every technical detail, it provides an overview of how SpaceX intends to accomplish the task.

In order to figure out exactly how the first stage will turn around and head home to Cape Canaveral, we need a lot of data from SpaceX, including Falcon's velocity, altitude and downrange distance at stage separation. The overall concept, however, is fairly straightforward: the first stage will kill off its eastward velocity and start traveling westward as it falls back to Earth. It will turn upright and slow down for a graceful soft landing.

Since a lot of the rocket's liftoff thrust is used to raise the rocket vertically, moving an almost-empty fuel tank laterally through near-vacuum seems doable. However, I'd love to get all of the numbers from SpaceX at some point and have someone with the necessary math skills explain how it will work.

I'm all for innovation but seriously, are they kidding? In other words what is the LF : RF ratio? (Launch Fuel to Return Fuel ratio) My guess is about 75 : 01. My 2nd question is regarding the return flight path; Is this a prograde sub-orbital re-entry or is it a retrograde re-entry thus increasing fuel load? My 3rd question is why not risk an external para-sail akin to a flying squirrel. This would be externally mounted. The McDonnell-Douglas aircraft company design they developed for the Gemini S/C had a para-sail & skid gear for a possible landing versus splashdown. NASA opted for the splashdown only design.

Jason -- this is a great story, well done!

Hi Bob, That's exactly the kind of information I think we'd all like to know. I haven't seen any confirmed numbers. In regards to your second question, all the speculation I've seen points to the first stage doing a retrograde re-entry, and the second stage taking a lap around the Earth. I doubt we will see any numbers on any of this for a long while. Jason

Regarding my 2nd question I know it was basically answered but I had to ask it because if they are planning on letting the planet overtake the stage for it to start re-entry as a fuel savings, I see that as a poor approach to re-entry. Drift, tumble etc or fuel consumption via an RCS is not they way to go. I could accept the skycrane (MSL) concept over this anyday. It doesn't add up. My option 3 seems to be the better approach. At a high enough altitude then a suborbital trajectory and option 3 for re-entry makes more sense.

@Bob Ware: They are serious, and you can get the history and details from the SpaceX site. Not enough detail to check the proprietary plans, but enough to understand what is the aim. Essentially, Musk's future plans (Mars colonization) demands much cheaper launch costs. Reusability is a must for him. Initially they tried to recover the stages with only chutes, but it was not doable. You can guess that Musk spent about two years to develop and pretest the backbone of the new concept. It will reduce net launch mass from ~ 4 % to ~ 2 % (Musk's figures), which is where the reusable SSTO Venture Star were headed. But if they can get up to some 5-10 launches before engine refurbishing and some 20-200 before stage replacement, they will be good. And the new launch system will do that while having the delivery system that suits interplanetary as opposed to EO missions, within the time frame that is set by Musk's colonization plans. (I.e. within his middle age lifetime.) For one they will transit to LCH4 instead of Venture Stars' LH2 to be able to return crafts from Mars. Your ideas adds risks, mass and years they don't have room for.

Bob, you can sit there all day and say "I think my idea's better", but at the end of the day, it's Elon Musk who's investing money into research in the area. Obviously they have a system down on paper, whatever it may be, that suggests it's doable, otherwise, why would he be investing money? Of course there's no certainty at this point, but at least the research is being done to see instead of sitting around posting about how you'd do it if you had the money.

I certainly applaud Mr. Musk for what he does. What surprises me is that no-one seems to remember how far down that road we were 20 years (!) ago already. Watch this (the maneuvering was done very deliberately to simulate a re-entry attitude): http://www.youtube.com/watch?v=wv9n9Casp1o http://www.youtube.com/watch?v=yW2w2EH8lr8 I understand that Blue Origin got some inspiration for its New Sheppard design from the DC-X: http://en.wikipedia.org/wiki/Blue_Origin_New_Shepard

Torbj??rn Larsson & John L: Thanks for the information. That's a big help to understand why and what behind Elon Musks' thinking. I have seen others try this in the past and they had not made it past the demonstration flight test for NASA. From what you point out it looks like Elon Musk has succeeded. Personally I do want him to succeed as I would like to see any other serious attempt succeed too. Thanks again for the information.

Hey guys -- I tried to locate more info from SpaceX but I could not get any on Grasshopper. Thanks again for your input. I really do want SpaceX to make this happen and sooner than later. It would be wonderful beyond words if SpaceX could get an astronauted mission to Mars completed independent of the world governments since they keep having monetary issues. I also took a glance at their heavy lifter and that is really impressive. I hope they are able to make their planned 2013 flight test time frame. It looks to be in the 1st quarter of their launch manifest, of course all components of that plan must be ready first.

George -- Thanks for the links. There is good info. in there as well. They are making good progress though SpaceX is quite a ways ahead of them but they will get there soon enough.

FYI: The New Shepard is a suborbital microgravity (at least 3 minutes) research vehicle. The prototype vehicle is comprised of 3 major components: the PM, I & CC (Propulsion Module, Interstage and Crew Capsule). Blueorigin.com side note: they say they are hiring...

wouldn't it be easier (and safer) to go on across the Atlantic like the shuttle abort scenario and just ship it back to a refurb plant . and won't it take more fuel to slow down and move back to the landing site than to just go on across .

Hi Forrest -- At a glance it would seem to be so but thinking it over a few points to be researched would be the stage parameters, cleaning (surplus fuel) permits, security, storage in bad weather, aircraft or ship size to transport. (which is safer, boat or plane issue), support teams (pay/benefits/strikes etc). Either side of the ocean re-entry is still required on the upper stages. If they start making their own fuel it may be cheaper in the long run for them to launch & recovery with their re-entry planned vehicle Grasshopper.