A Soyuz capsule settled safely onto the grassy steppes of Kazakhstan this morning, bringing Roman Romanenko, Chris Hadfield and Tom Marshburn back to Earth after 146 days in space. The Soyuz TMA-07M spacecraft undocked at 7:08 p.m. EDT Monday, executed a deorbit burn at 9:37 p.m. and landed at 10:31 p.m. (02:31 UTC Tuesday). 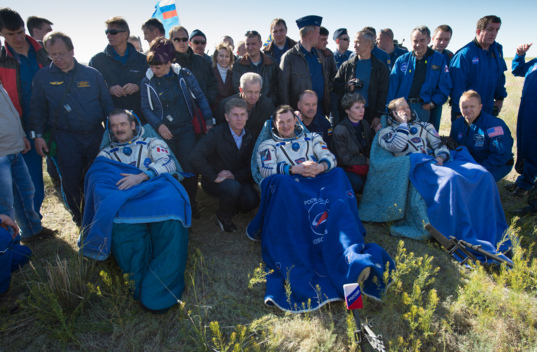 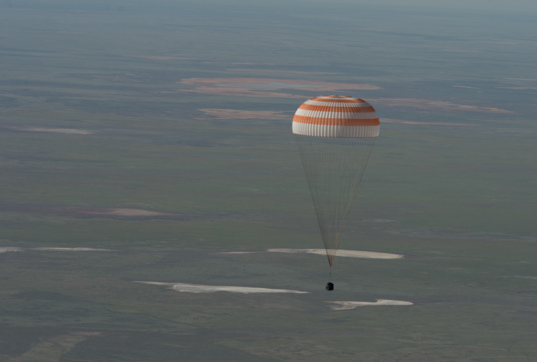 The departure kicked off Expedition 36, which begins with the three-person crew of Commander Pavel Vinogradov, Alexander Misurkin and Chris Cassidy. They will be joined on May 28 by Karen Nyberg, Fyodor Yurchikhin and Luca Parmitano.

The Soyuz landing also means the end of a formidable social media presence on the station. Canadian Space Agency Commander Chris Hadfield has garnered worldwide attention for his tweets, photos and videos. He certainly isn’t the first astronaut to use social media. Don Petit and Suni Williams are two recent examples that come to mind. So what is it about Hadfield that makes him such a hit?

The answer, I believe, lies in his final video from orbit. On Sunday, he posted a stirring rendition of David Bowie’s classic hit Space Oddity.

The video showcases why Hadfield captured the imagination of so many Earthlings. First of all, he sings—quite well, in fact, nailing some pretty high notes as he floats around the station. He also risks looking campy by staring out of the Cupola wistfully. Instead of cringing, however, I smiled—the scene comes off as peaceful and heartwarming.

Hadfield's video is also artistic. There’s something wonderfully symbolic about a guitar floating gently through the ISS that speaks to the beauty of spaceflight. Bowie released Space Oddity in 1969, right at the pinnacle of our human spaceflight efforts.  Now, it is arguably taken for granted that an international contingent of astronauts and scientists have been zipping around the Earth every 90 minutes for the past 12 years.

I believe many spaceflight fans—myself included—find the line between science and art to be very blurry. A photograph of the Earth from space, for instance, speaks for itself in terms of beauty. But art is also important because it can remind us why we find science so cool in the first place.

Perhaps, then, it's fitting that it was a Canadian author, Margaret Atwood, who said:

Thanks Jason! That was a great update (as usual) and a wonderful addition of Space Oddity to your article. Thanks for doing that! Space exploration is about fun and beauty also. It is not all black and white science.