Shenzhou-9 reached its preliminary orbit approximately nine minutes, forty-five seconds into flight, as it separated from the Long March 2F's core stage. The spacecraft is expected to dock with Tiangong-1 on Monday, kicking off an expected ten-day aboard China’s first space station. 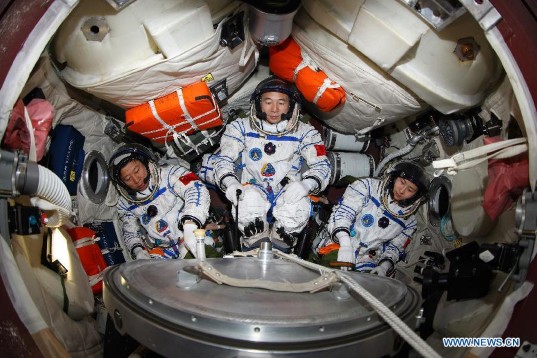 The crew of Shenzhou-9 trains in a capsule simulator. From left to right: Liu Wang, Jing Haipeng and Liu Yang.

Thanks Jason! That is a great story and video link! Thanks also for not clipping it down to fragmented bites only! It is interesting to see that they use engineering camera techniques as we do which is mre so than Russia. I noticed their arms are not a strong as ours due to the 4 cables per arm for support. They are seen clearly in the arm retraction.