Just before sunrise on April 26, India’s southeastern skies were lit by the launch of RISAT 1 as it rocketed upward over the Bay of Bengal. It was a big moment for the Indian Space Research Organization, the country’s NASA equivalent. Radar Imaging Satellite 1 is India’s first spacecraft that can see the ground through both cloud cover and darkness. Its applications include monitoring the country’s agriculture during kharif season -- the annual monsoon period -- as well as the occasional military use to peek at neighboring countries. 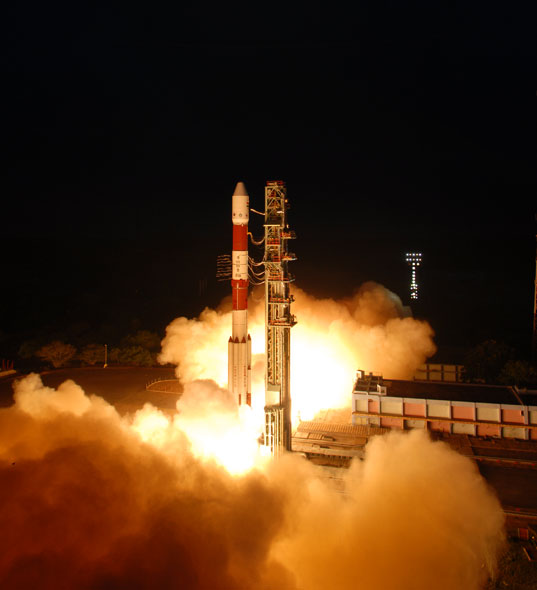 At 1,858 kilograms, RISAT 1 it is the heaviest Earth observation satellite ever launched by India, and the weightiest payload ever hoisted by the country's workhorse Polar Satellite Launch Vehicle, known as PSLV.

The PSLV is a four-stage rocket, with alternating solid and liquid-fueled stages. It comes in three variants. The standard version uses six add-on solid rocket boosters; four ignite at liftoff, another two kick in mid-flight. The core-alone, or CA version, uses no solid rockets. Finally, an XL version -- which was used for RISAT 1’s launch -- comes equipped with more powerful solid rockets.

Thursday’s launch increases the number of consecutive PSLV flights without a failure to 21. The cost of the mission was a bargain by Western standards: $72 million USD for the satellite, and $21 million for the rocket, as reported by the Times of India.

Just how cheap is the PSLV? Here’s a table of what the United States has to offer in terms of comparable launch vehicles:

RISAT 1 uses synthetic aperture radar, or SAR, to collect imagery. As the spacecraft travels along its polar orbit, inclined 97 degrees from the equator, it sends microwave pulses at the ground. These pulses, travelling at the speed of light, have a wavelength of 5.35 gigahertz and can pass right through cloud cover. They scatter upon hitting the ground, with some reflecting back to the spacecraft.

In optics, an aperture generally refers to the opening through which reflected energy passes to form an image. In the case of a visible light camera, this is the shutter opening. For radar, the aperture is the antenna that receives the reflected microwave pulses, and its length determines the resolution of the resulting image that will be constructed. A synthetic aperture is created by moving the real aperture -- the antenna -- as it receives its signal, thus creating an artificially longer aperture.

RISAT 1 zips around the Earth once every hour and a half at an altitude of 536 kilometers. In a slightly higher orbit of 766 kilometers, with an orbit a single degree more inclined at 98, is a fellow Earth observing satellite with SAR capabilities: the European Space Agency’s Envisat. After 10 years of service -- twice its designated lifetime -- Envisat mysteriously stopped transmitting on April 8.

The ESA has been scrambling to reestablish communications with Envisat, thus far to no avail. The French space agency CNES helped out by capturing an image of Envisat with their high-resolution Pleiades satellite as it passed within 100 kilometers. The stunning picture confirms Envisat is intact and in its correct orbit, but has rotated into an unexpected orientation. 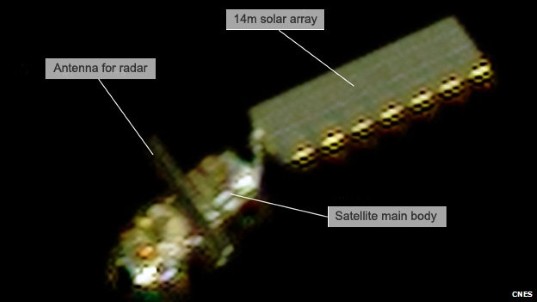 ESA's stricken Envisat satellite was imaged by the CNES satellite Pleiades at a distance of 100 kilometers. Envisat was shown to be intact but oriented in an unexpected position. Ground controllers have not been able to contact the satellite since April 8.

Both Envisat and RISAT 1 can tweak the polarization and angle of their scans, depending on what surface characteristics they are imaging. This varies the possible width of the area being scanned -- called the swath width -- and changes the resolution of the resulting data. In general, higher-quality resolutions mean smaller swath widths.

Envisat’s now-silent SAR package is called ASAR; the ‘a’ stands for ‘advanced.’ It can produce resolutions ranging from 30 to 1000 meters, with swath widths between 5 and 400 kilometers. RISAT 1’s SAR is less versatile but offers higher-quality resolutions, including a ‘spotlight’ mode that can produce images with a resolution of less than 2 meters. The full range of RISAT 1’s image resolutions range from less-than 2 to 50 meters, in swath widths of 3 to 240 kilometers.

The failure of Envisat means the loss of more than just a SAR; Envisat has 10 Earth-observing instruments that are no longer monitoring our dynamic planet. When RISAT 1 completes its checkout phase and begins to operate, one more set of eyes will be added to the toolkit we use to monitor and understand our world. 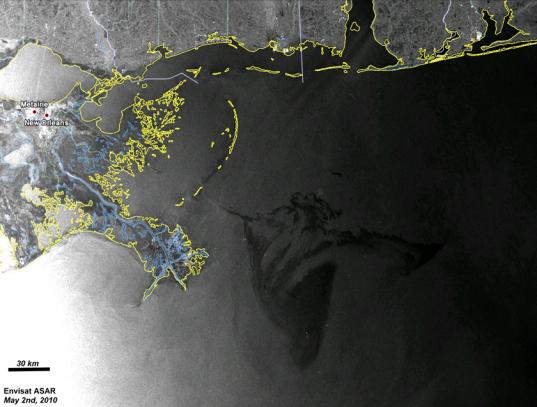 In this image from May 2, 2010, Envisat images the spreading Deepwater Horizon oil spill in the Gulf of Mexico. The image was created using Envisat's Advanced Synthetic Aperture Radar.

So how does this compare to Canada's RADARSAT-2 ?