Morpheus lander gets back off its feet

NASA’s Project Morpheus lander completed a 74-second flight yesterday in which it hovered for a full minute. It was the second tethered test for the new model. The first test, which occurred on May 24, ended after a few seconds when the vehicle exceeded stability limits.

Morpheus is an autonomous moon lander built by engineers at NASA’s Johnson Space Center and the private spaceflight company Armadillo Aerospace. It is designed to carry 1,100 pounds of cargo to the lunar surface, dodging boulders and rocks as it lands using its Autonomous Landing and Hazard Avoidance Technology (ALHAT).

A big problem for any large robotic spacecraft trying to land on another world is unforeseen surface obstacles that might, shall we say, significantly shorten a mission. Therefore, when landing in a hazardous area, it's important to be able to make on-the-fly adjustments. Neil Armstrong explained this need in one of the first sentences radioed from the lunar surface:

“The auto targeting was taking us right into a football-field-sized crater, with a large number of big boulders and rocks for about one or two crater-diameters around it, and it required flying manually over the rock field to find a reasonably good area.”

After almost two dozen tethered flight tests, the first Morpheus lander was shipped to Kennedy Space Center last year to demonstrate its ALHAT in a field of simulated boulders built near the Space Shuttle's old runway.

The first free flight went about as bad as it can get. On August 11, 2012, as Morpheus lifted off the ground, its team lost data from the Inertial Measurement Unit (IMU) that supplies navigation data to Morpheus’ flight computer. Essentially blinded by the loss of its IMU, the little spacecraft tipped over and crashed 50 feet from the launch site. It burst into flames, and exploded several seconds later. The vehicle was a total loss.

These things happen. The Morpheus team, in a blog post, reminded naysayers that more than one Space Shuttle Main Engine ended up at the bottom of the flame trench at Stennis Space Center during testing in the 1970s. This, the team says, is why we test. 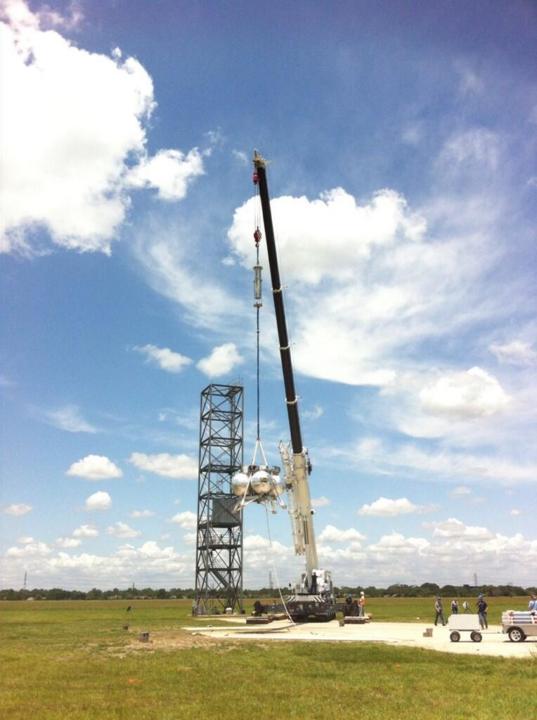 NASA's Morpheus 1.5B lander prepares for its second test flight, the 22nd overall for the program, on June 6, 2013.

For Morpheus, in fact, failures are a part of standard operating procedure. Project engineers employ a lean development cycle far different than what was used for the Space Shuttle and what is currently being used for the Space Launch System. The emphasis is on testing and analysis, rather than lengthy design deliberations. In other words, engineers roll Morpheus out to a test pad, fire it up, and learn from what happens.

In this 2011 article by Jim Hillhouse for Americaspace.org, the Morpheus team confronted the age-old problem of fuel tank sloshing, which can throw off the stability of a vehicle. Instead of spending time and money modeling the problem with software, engineers paid a visit to their local Home Depot and built a transparent replica of a Morpheus fuel tank. This approach allowed them to see firsthand what was happening as the lander flew. It only cost about a hundred bucks and a week of time, Hillhouse said. 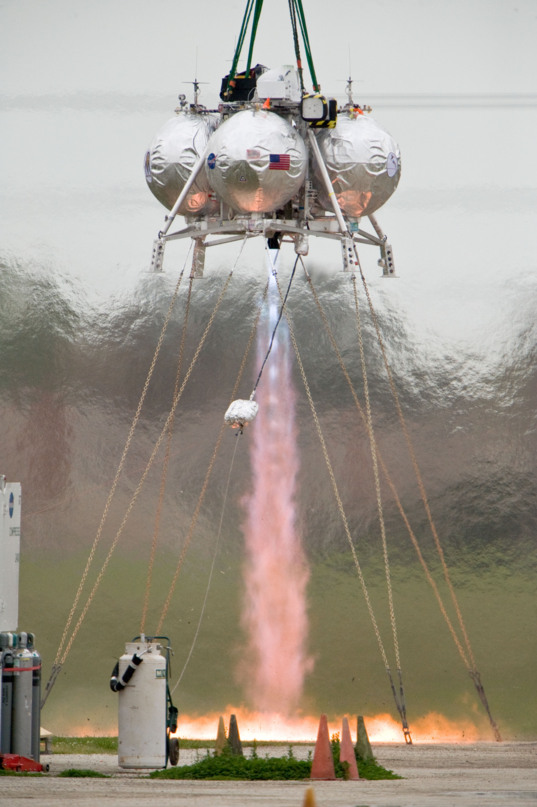 The first Morpheus lander is held securely to the ground during a hot fire test at the Johnson Space Center on February 27, 2012.

The entire project has an interesting backstory. In September 2010, after the back-to-the-moon Constellation program was cancelled, a movement called Project M grew within NASA to continue working toward a moon landing on the cheap. The original plan was to have a Morpheus lander deploy a Robonaut on the lunar surface for less than $200 million, plus the cost of a $250 million launch vehicle. An ambitious time frame of 1,000 days was set.

That project was eventually scaled back. A Robonaut torso was sent to the International Space Station, and the Morpheus lander carried on as a testbed for autonomous landing and green fuel technologies. The engine is fueled by methane, rather than liquid hydrogen or toxic hypergolic propellants.

When the first Morpheus lander crashed, the team already had a backup mostly ready to go. They say the new lander, version 1.5B, sports seventy upgrades to vehicle components and ground systems. According to the most recent Project Morpheus blog post, the tenacious lander may head back to Kennedy Space Center as early as this summer for another crack at the boulder field.

It would be neat if NASA would select Moonrise as the next New Frontiers mission, use this architecture and have Orion snatch the samples out of lunar orbit. I hope something comes of this effort.

If this ever lands on the moon I'll eat my hat. Cut and Try "engineering" at its worst.

When you are trying new ideas i design or flight approaches you cannot know for sure if they work until you actually fly it. Computers are stupid. They only know what you tell them. They (to date) cannot reason, therefore only process what data they have. They cannot anticipate either. AI cannot anticipate either. Its algorithm allows only for a selection of best choice after the fact has been established. As I just said, computers cannot reason. Any program is a good as a programmers knowledge. If a programmer is missing a key point, something will fail. Mechanically something can fail when you are testing new designs. When that happens you impound the data, any vido/stills, image the debris field, document the debris field, then pick up the pieces and figure out what went wrong and fix it. Then flight test again. I've done this myself when once in a while I had my own rocket launching accidents. The next time out my rockets flew successfully.