NuSTAR telescope to get close look at black holes, supernovae

At the center of the Milky Way, a monster awaits. Known as Sagittarius A, this turbulent region of space is believed to contain a black hole four million times more massive than our own sun. Within the black hole -- known as Sagittarius A* (pronounced "A-star") -- space and time lose their conventional meanings, as surrounding matter is pulled to inescapable oblivion. A new NASA spacecraft called NuSTAR will study this singularity, along with its brethren in and outside of our galaxy, in unprecedented detail.

NuSTAR, the Nuclear Spectroscopic Telescope Array, is the most sensitive X-ray telescope ever developed, improving on the pioneering work of similar spacecraft like the Chandra X-ray Observatory. In addition to surveying a variety of black holes and supernovae, it will also peer into the heart of extreme active galaxies like M87, where streams of energized plasma spew thousands of light years into space from supermassive black holes. 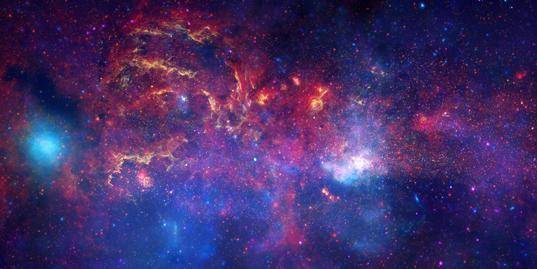 Sagittarius A: the center of the Milky Way

A composite image of Sagitarrius A, the center of the Milky Way, taken with three space-based telescopes. X-rays detected by the Chandra X-ray Observatory are represented in blue and violet, near-infrared light seen by the Hubble Space Telescope is yellow and infrared light captured by the Spitzer Space Telescope is red. The image covers one-half of a degree in the sky, about the width of the full moon. The bright blob of X-ray light in the picture's center-right is Sagittarius A, which contains a suspected supermassive black hole.

NuSTAR will accomplish its objectives by analyzing the X-rays emanating from its astronomical targets. X-rays are short wavelength, high-energy forms of electromagnetic radiation that cannot be seen by human eyes. Consider a standard tungsten filament light bulb, glowing at a temperature of around 3000 degrees Kelvin. We only see the portion of the bulb's light that has a wavelength between 400 to 700 nanometers. In reality, that's only about a tenth of the bulb's total energy output; most is in the infrared, which has a longer wavelength than visible light.

For comparison, the core of a supernova has a temperature of about a billion degrees Kelvin. Again, some of the energy is emitted in the visible range, which is why we can see supernovae in other galaxies. Some of the exploding star's energy also blasts out in X-ray form, in very short wavelengths about the size of an atom. Being able to "see" these X-rays with a telescope can tell us a great deal about the most exotic processes in our universe.

So, how does an X-ray telescope work? For starters, it needs to be positioned above the Earth's atmosphere, which acts as a natural X-ray filter. It also requires a drastically different design from an optical telescope. Standard reflecting telescopes use large, curved mirrors nearly perpendicular to incoming light rays, which focus the light in one spot, called the focal point. Such mirrors are said to have a high incidence angle in reference to the incoming light rays. X-rays, however, do not reflect like visible light; they get absorbed by mirrors or pass through them. An X-ray telescope, therefore, must coax the X-rays to their focal point by using shallow incidence angles. The tradeoff is a very long distance between the reflecting optics and the focal point. This is called the focal length, and in NuSTAR's case, it ends up being about 10 meters. 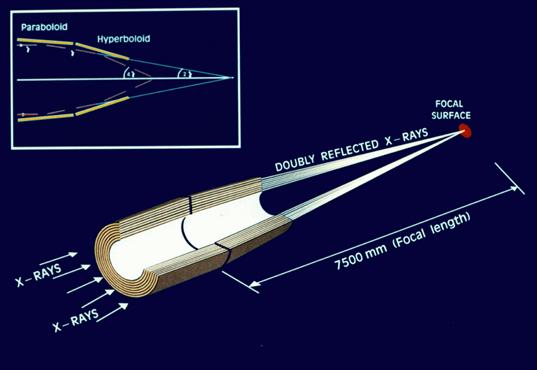 XMM-Newton: the anatomy of an X-ray telescope

An X-ray telescope uses shallow incidence angles to gradually direct incoming electromagnetic radiation to a focal point. This diagram shows the optics design used by XMM-Newton, which is similar to that of NuSTAR.

Complicating matters further are the materials required for an X-ray telescope's reflecting surfaces. Even with shallow incidence angles, heavy metals must be used to prevent the X-rays from being absorbed. The Chandra X-ray Observatory users iridium and gold for this task, but these materials can only reflect X-rays with energies up to 10 kiloelectronvolts; anything higher-energy won't bounce towards the focal point. NuSTAR uses multilayer coatings of alternating high and low density materials to increase that limit. This includes tungsten and platinum for the high density coatings, and silicon and carbon for the low densities. The result? NuSTAR can reflect and focus X-rays all the way up to 79 Kiloelectronvolts, resolving images in previously unseen levels of detail.

Despite the fact that NuSTAR offers significant technological advancements, it won't break the bank -- or the scales -- as it heads into orbit. The telescope is categorized as a NASA Small Explorer mission, part of a spacecraft heritage dating back to Explorer I, America's first satellite. Small Explorers must not cost the space agency more than $120 million. To accomplish this, NuSTAR uses a deployable mast to save on weight and space. Once in orbit, the mast will extend the optics package the necessary 10 meters from the X-ray detectors. This feature allows the spacecraft to fit into a payload fairing only two meters long and one meter in diameter.

NuSTAR's small payload fairing will be sent towards low-Earth orbit by an air-launched Pegasus XL rocket. Air-launching allows for a wider variety of orbits at cheaper prices, providing the payload is light and small enough to qualify. The carrier vehicle -- Orbital Science Corporation's Stargazer aircraft -- will take off from Kwajalein Atoll in the Pacific Ocean, fly to an altitude of 12 kilometers, and drop the Pegasus from its belly. After free-falling for a few seconds, the rocket will ignite the first of its three solid rocket stages, sending it to an eventual altitude of 550 kilometers.

Kwajalein Atoll sits at 8˚ North latitude, ideally positioned for NuSTAR's near-equatorial, 6˚ orbit. This trajectory is necessary for the spacecraft to avoid the South Atlantic Anomaly, where the Earth's inner Van Allen radiation belt dips close to the atmosphere, flooding the region with X-rays that would interfere with the telescopic readings. Here's a video of a previous Pegasus XL launch carrying the AIM spacecraft. AIM -- Aeronomy of Ice in the Mesosphere -- is a fellow NASA Small Explorer mission that studies the Earth's highest cloud formations.

NuSTAR is currently at Vandenberg Air Force Basewaiting to be joined to its Pegasus rocket. It will then be encapsulated in its payload fairing and flown by the Stargazer to Kwajalein Atoll. Launch day is currently scheduled for March 14, 2012.

Side note: if you're a fan of Star Trek: The Next Generation, you might recall that the Stargazer and the Pegasus were prior starship assignments for Captain Picard and Commander Riker. Wikipedia claims this is no coincidence, but lacks a proper citation. I found an old press release mentioning that the Stargazer is indeed named after Picard's first command, but nothing on the Pegasus. If you're in the know, I'd love to hear from you in the comments!