Checking in with NASA's Commercial Partners

It's been a while since we checked in on NASA's commercial crew partners. Will SpaceX send a Dragon capsule to the International Space Station before 2012? What's Boeing up to in the desert, near the Nevada-California border? And did anyone leave the recent Space, Science and Technology Committee meeting on Capitol Hill with a smile?

Arm your launch abort system -- it's time to see what's up in commercial space.

First, let's take a look at NASA's launch schedule. SpaceX and Orbital Sciences Corporation are still officially on the books for December 2011 launches. SpaceX has inked December 19 for a Falcon 9 liftoff, which would be followed a few days later with a Dragon capsule docking at the ISS. Is there any chance that this date will hold?

Thanks to the latest successful launch of a Soyuz rocket, and the subsequent docking of a Progress module at the ISS on November 2, human trips to the space station are back on schedule. The first NASA astronaut trained in grappling the Dragon capsule, Dan Burbank, is scheduled to launch for the ISS on November 13 with two cosmonauts. The second, Don Petit, heads up on December 21 to kick off Expedition 30.

That means there's a lot going on around the date of SpaceX's December 19 blastoff, including a software upgrade a couple of weeks earlier. This increases the chances that the launch date will slip, but the official story is still that they're targeting December 19. If a delay occurs, look for the Falcon and Dragon to launch in January 2012.

Also slated for a test flight in early 2012 is Orbital Science Corporation's Taurus II rocket system, which will depart from Wallops Island in Virginia. NASA currently has the flight scheduled for "December+," but delays with the launch pad construction have likely pushed the flight back to February or March. The first flight will send a mockup of Orbital's Cygnus resupply vehicle into orbit, demonstrating the burgeoning company's readiness to begin supply runs to the ISS.

All of the above missions deal with cargo. What about the most precious cargo of all -- humans? 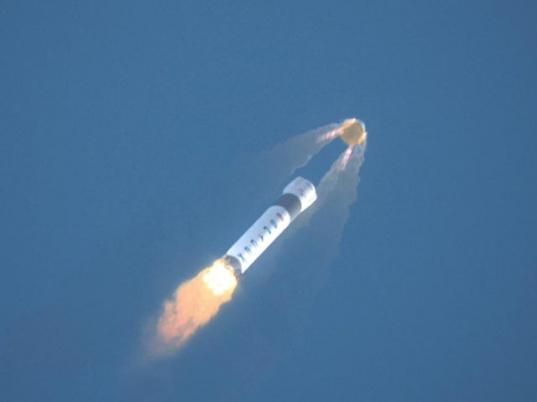 A rendering of SpaceX's Dragon launch abort system as it sends the capsule away from a failing Falcon 9 rocket.

SpaceX is one step closer to that goal, with news arriving that NASA has approved the preliminary design review of the Dragon capsule's launch abort system. An LAS is used to propel a capsule full of humans away from a failing rocket stack. Traditional LAS systems employ a small tower with engines on top of the capsule to pull a capsule away, but a handful of newer systems, including the Dragon, use a push design. In the Dragon's case, the engines used to power an abort are built into the sides of the capsule. Why the change? Tower abort systems must be discarded once the vehicle has attained a high enough altitude -- meaning they aren't reusable. SpaceX aims to change this, making Falcon flights cheaper. In addition, they may also use these same engines to soft-land the Dragon without parachutes when it re-enters the Earth's atmosphere during normal operations.

Also making progress in the quest to build a space taxi for the ISS is Boeing, which has been conducting drop tests for their CST-100 crew capsule in the Mojave desert. The CST is designed to land on terra firma, rather than splashing into the ocean like traditional American crew capsules. Once again, money drives the design change -- recovery boats to pluck a bobbing capsule out of the ocean cost extra cash.

Crew capsules that don't descend into water need something to soften their parachute-powered landing. Soyuz capsules accomplish this with retro-rockets that fire just before impact. Boeing will take a page from the planetary exploration playbook and use airbag technology similar to that used by the Mars Pathfinder and Exploration Rover missions. Following a toasty trip through the atmosphere, the CST jettisons its heat shield and fills its airbags with nitrogen and oxygen, a process that takes about 30 seconds. How does Boeing test the airbags' effectiveness? They dangle the CST off the back of a truck moving anywhere from 10-30 feet per second, which simulates the horizontal movement of a craft being pulled along by a gust of wind. Then they simply drop it -- plop! -- onto the desert floor. 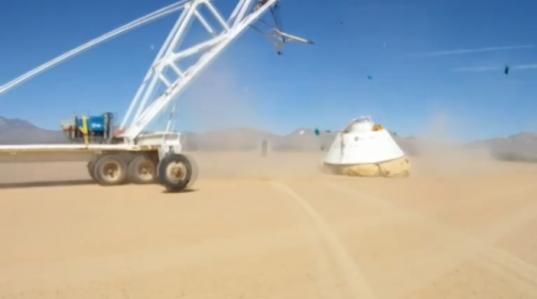 In a screen grab from a Boeing video, the CST-100 is seen at the moment of impact during a drop test.

Speaking of dropping things, Sierra Nevada announced that they intend to begin high-altitude testing of their Dream Chaser reusable space plane next year. The tests will involve flying the DC from a carrier airplane to a high altitude, releasing it, and landing it on a runway under autopilot. No specific time frame for the tests has been released. The DC is designed to ride into orbit atop an Atlas V rocket.

Sierra Nevada's director of space exploration Steve Lindsey was among several other NASA commercial partners to show up for a meeting of the Space, Science and Technology Committee in Washington, DC on October 26. The companies were in town to face congressional questions about NASA's continuing investment in commercial space. Also present were Elon Musk from SpaceX and John Elbon from Boeing, making Blue Origin the only crew partner that didn't show -- the mysterious company hasn't said much since they announced the loss of a test vehicle on August 24.

The discussion revolved around the existence of a commercial space market beyond NASA. Currently, $500 million is allocated for human spaceflight taxis, but NASA has asked for an $350 million to keep the programs on schedule. The cost of a Soyuz ride currently sits at $63 million, but that figure will soon rise to $80 million. According to Elon Musk, SpaceX can lower that figure to $20 million over time. But even with the promise of long-term savings, not everyone at the hearing was convinced the investment was worth it, including representative Brad Miller (D-NC), who said, "it sounds like it's a lot more expensive than the deal we have now."

A tough crowd for commercial crew partners, to say the least. The private space era opens for business soon, whenever SpaceX formally gets the green light to send a Dragon to the ISS.