Meet the next big thing in NASA's mission to study planet Earth: NPP, the inaugural satellite member of NASA's next generation Joint Polar Satellite System. NPP is scheduled to be launched from Vandenberg Air Force base on October 25. 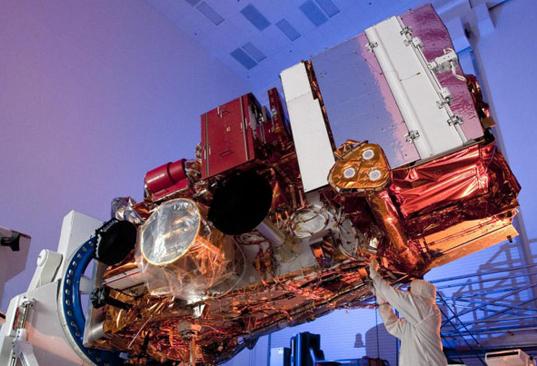 To understand NPP's place in the NASA Earth observation program requires navigating an intimidating amount of acronyms and bureaucracy. NASA's current flagship program for the study of our planet is the Earth Observing System, which most recently welcomed the Aquarius satellite into its membership, on June 10, 2011, for a mission to study the salinity of Earth's oceans.

Two of the biggest players in the United States' Earth observation business are the National Oceanic and Atmospheric Administration (NOAA), and the Department of Defense (DOD). NOAA relies on Earth satellites for things like climate research and weather forecasting, while the DOD is more concerned with knowing the local forecast in a remote part of the world for a tactical military mission. Since both agencies share a basic need -- satellites that watch the weather and report their findings to monitoring stations around the globe -- they decided to develop a common infrastructure together. Thus, the National Polar-orbiting Operational Environmental Satellite System (NPOESS) was born. Plans were soon drawn up for the first proof-of-concept satellite to test the budding system. It was dubbed NPP -- the NPOESS Preparatory Project. That's right, NPP is an acronym that contains an acronym.

Sadly, the partnership between NOAA and the DOD didn't last. Citing delays and cost overruns, the White House terminated the arrangement on February 1, 2010, spurring the creation of two replacement programs: NOAA's Joint Polar Satellite System, and the DOD's Defense Weather Systems Directorate. The ground network set up to downlink data from NPOESS will continue to be shared by both agencies.

So what happens to NPP, the test satellite with outdated acronyms in its name? It's still a go. NPP, while retaining its designation as a proof-of-concept, will be the first operational member of NOAA's Joint Polar Satellite System. The satellite will be equipped with five fully-functional Earth observing instruments, and be the first to simultaneously research climate change factors while providing data on day-to-day weather forecasts.

NPP will use its instrument package to test the Joint Polar Satellite System, while providing climate research and assisting in weather forecasting.

VIIRS will image Earth and its clouds in daylight and darkness, using infrared and visible light. Similar to MODIS, VIIRS should provide some amazing imagery of the Earth and its weather processes, including hurricanes, wildfires, and ice floes. [MODIS is the instrument whose images I post on those occasions when I'm watching wildfires near the Society headquarters. --ESL]

These two sounders will create temperature, moisture and pressure maps of the atmosphere, building on the work currently being performed by instruments like AIRS.

OMPS will create daily maps of the ozone layer, providing scientists with a health profile of the Earth's troposphere. Additionally, the instrument will assist in ultraviolet light forecasting, in case you're wondering how much sunscreen to pack for your trip to the beach.

CERES is a veteran in the world of space-based climate forecasting. The latest incarnation of the experiment (there are currently four CERES instruments in operation) continues the quest to study how much energy is being absorbed and radiated by the Earth. Information from CERES will provide vital data used to modify climate change models.