On Tuesday, September 6, NASA released new high-resolution photos of the Apollo 12, 14 and 17 landing sites, from vantage points as close as 21 kilometers from the surface. The pictures were taken by the Lunar Reconnaissance Orbiter (LRO), a mapping satellite that has been in lunar orbit since 2009. To date, the spacecraft has sent a whopping 192 terabytes worth of data back to Earth.

LRO started snapping pictures of Apollo sites in 2009, but those images were shot from a height of around 50 kilometers. The orbiter spent the past month in its lower orbit getting the new high resolution pictures, before returning to its standard altitude.

When compared with the old images of the three landing sites, the improvements are drastic. For example, the new images feature a sharper look at the Apollo Lunar Service Experiment Packages (ALSEPs) left behind by astronauts on each mission. In the case of Apollo 17, the detail is fine enough to make out individual package components, such as geophones (used to record seismic activity), heat transfer cables (used to measure heat emanating from the moon's interior), and discarded packing equipment. That's right – you can actually make out trash sitting on the lunar surface!

Another improvement is the crispness of each mission's lunar module descent stage. Apollo lunar modules landed as a combined spacecraft, but separated into ascent/descent units when it was time to head home, using the descent stages as launch pads to blast the astronauts back into lunar orbit. Each lunar module had a meaningful name used to simplify communications during missions.

Here's a quick rundown of the three Apollo missions as seen in the new images. For each image shot from above, I inserted a picture taken from the surface during the original mission in order to provide a sense of perspective and scale. My composite images have lower resolution than the actual pictures taken by LRO. If you want to see the original photos in all their glory, check out NASA's press release here or head over to Arizona State's Lunar Reconnaisance Orbiter Camera website for additional details.

Mission: Apollo 12 is said by many to represent the most congenial of the Apollo crews, featuring the boyish Pete Conrad, who made no attempt to hide his obvious elation while he was shuffling around on the moon. [EDIT: This funny photo of Pete Conrad exemplifies his personality. --ESL] The Saturn V rocket that launched the mission from Earth was struck by lightning twice during its ascent to orbit, but luckily, no serious damage occurred and the mission was a success. The crew landed in the moon's Ocean of Storms near Surveyor 3, a robotic probe that had previously landed on the moon two years earlier. To this date Surveyor 3 remains the only probe to have been sent to another world and receive a subsequent visit from its creators. 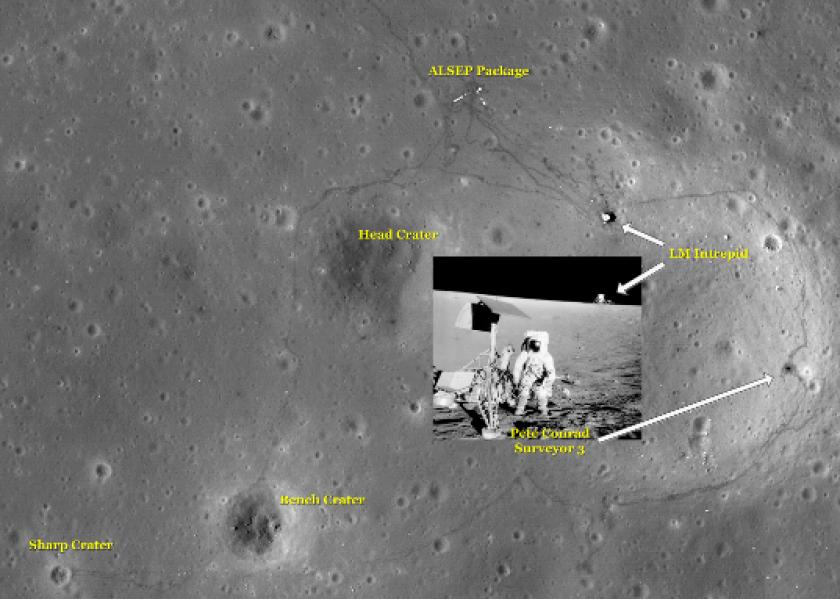 Apollo 12 site as seen by LRO

The descent stage of the lunar module Intrepid is seen perched next to Surveyor Crater and the Surveyor 3 robotic probe, in this LRO photo of the Apollo 12 site. Astronaut foot trails to other nearby craters are also visible. The inset features Pete Conrad next to Surveyor 3, with Intrepid in the distance.

Mission: After winning a long battle with Ménière's disease, Alan Shepard, America's first human in space, returned to active astronaut duty and secured a trip to the moon. Shepard and lunar module pilot Ed Mitchell landed at Fra Mauro, the original destination of Apollo 13, which never made it to the lunar surface due to a catastrophic oxygen tank explosion en route to the Moon. Shepard famously teed up a golf ball and hit it with an improvised club, proclaiming the ball went "miles and miles." 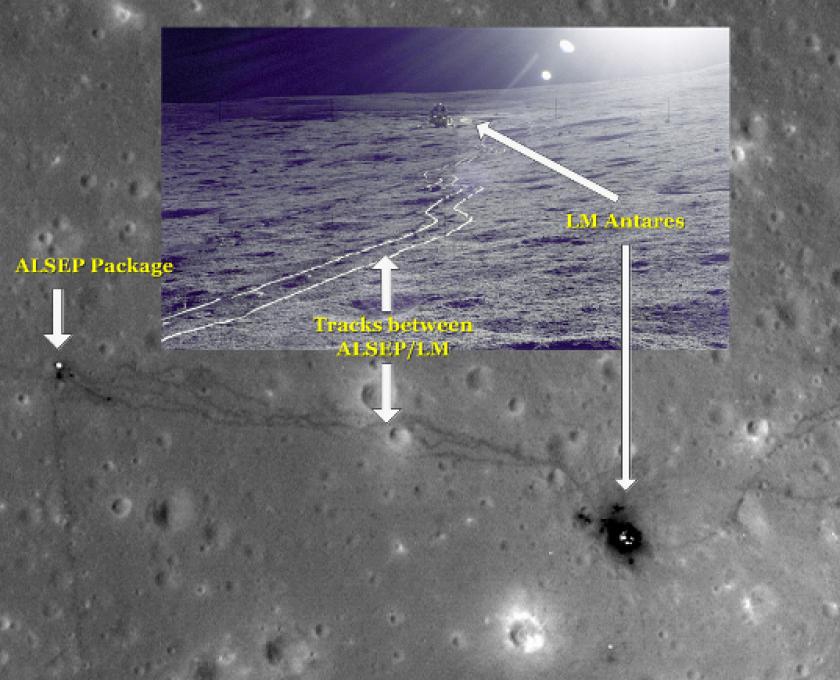 Apollo 14 site as seen by LRO

Tracks from a cart used to carry ALSEP equipment from the lunar module Antares are visible in this LRO photo. The inset shows a picture taken from the ALSEP site, looking back at the Antares.

Mission: The final humans to walk on the moon also hold the majority of the lunar duration records, including the longest total walks on the moon and the biggest haul of moon rocks (115 kilograms). The mission featured the iconic lunar rover vehicle, and was also the first and only time a true geologist visited the moon (Harrison Schmitt). Schmitt, in addition to providing his services as a geologist and pilot, also provided comic relief in a series of well-documented falls on the lunar surface. 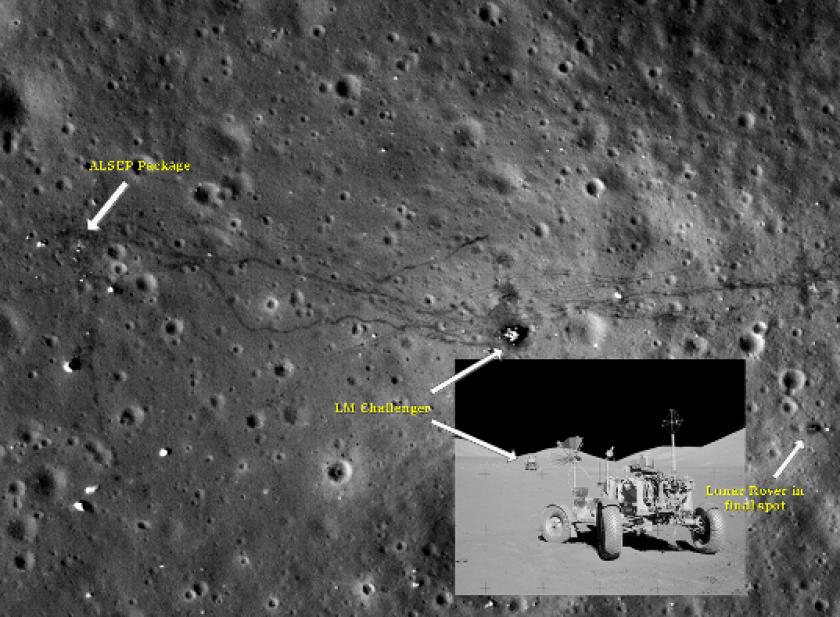 Apollo 17 site as seen by LRO

The descent module of the lunar module Challenger is seen in this LRO image of the Apollo 17 site, halfway between the ALSEP site and the final resting spot of the lunar rover. In the inset photo, the rover is also at its final stop, with the Challenger seen in the background.