What's up in human spaceflight: the gas station edition

Last week was a relatively quiet one for human spaceflight, as planetary exploration stepped briefly into the limelight. The Mars Exploration Rover Opportunity finally reached Endeavour crater, marking the end of an arduous three-year journey. The journey's end marks the start of what is, in a sense, a brand new mission as it begins to explore a new geologic environment.

Off-world fuel caches are hardly a new concept. As far back as the end of the Apollo program, NASA realized that long-duration human spaceflight travel would likely require the presence of propellant depots in space. Heavy-lift rocket systems use most of their energy just to boost a payload into Earth orbit. Having fuel available in orbit would dramatically reduce the mass that needs to be lifted off of Earth, making more room available for the hardware needed to support NASA's ambitious goals for human missions to an asteroid and Mars. 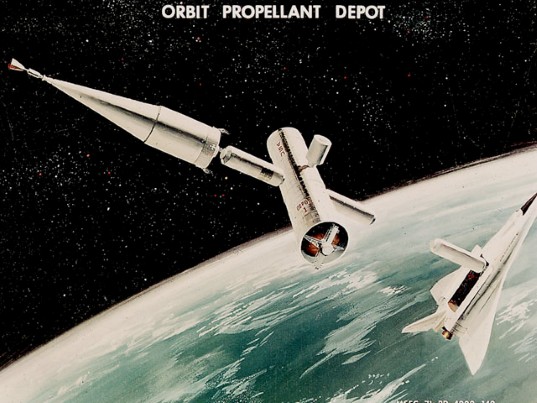 The future all over again

A 1971 concept of the space shuttle at a rendezvous with a propellant depot.

Speaking of those ambitious goals, NASASpaceflight.com published some new information on the Multi-purpose Crew Vehicle (MPCV) this week. The NASA content in the article is far from officially authorized, but the article strongly suggests that we will see a test flight of the MPCV -- the capsule that'll succeed the shuttle in launching humans to space -- aboard a Delta IV Heavy rocket as soon as July 2013. Why a Delta? The Space Launch System (SLS), the rocket that's being designed specifically to launch the MPCV, is not likely to fly anytime soon, as it is currently mired in the design phase. Additionally, it is now the subject of some political wrangling between the Senate Commerce committee and NASA.

NASA's Flight Opportunities Program, managed out of the Dryden Flight Research Center in Edwards, California, has announced seven companies that it will use to send scientists and experiments into suborbital space. I was initially hesitant to include this story, as a lot of the articles on the subject have focused mainly on the inclusion of Virgin Galactic in the selection roster. I didn't feel enthusiastic about scientists paying $200,000 for five minutes of weightlessness in which they and their experiments would be accompanied by comedian/actor Russell Brand, the rock band Muse, and possibly England's Prince Harry (only Brand is a confirmed passenger at this point).

Then, I saw this remark from Commercial Spaceflight Federation executive director John Gedmark: "Just as 1920s airmail purchases helped jump-start the airline industry, we expect that NASA's purchases of flights on commercial suborbital vehicles will help accelerate this new industry." Mr. Gedmark makes an interesting point: will minor, comparatively cheap ventures into suborbital space build confidence in the commercial space industry? Will it stimulate its growth?

Lastly, poignant photo galleries surfaced across the Internet of the once-mighty space shuttles Endeavour and Discovery, as they swapped places between Kennedy Space Center's Orbiter Processing Facility and the Vehicle Assembly building. Both were missing parts of their noses, their engines, and other accessories – a reminder that the days of the shuttle program are behind us.