Beginning of the post-shuttle era

The post-space shuttle era has begun.

At 5:57AM EDT (9:57 UTC) this morning, Atlantis gracefully rolled to a stop on runway 15 at the Kennedy Space Center Landing Facility, completing the 135th and final mission of the space shuttle program that started in 1981. 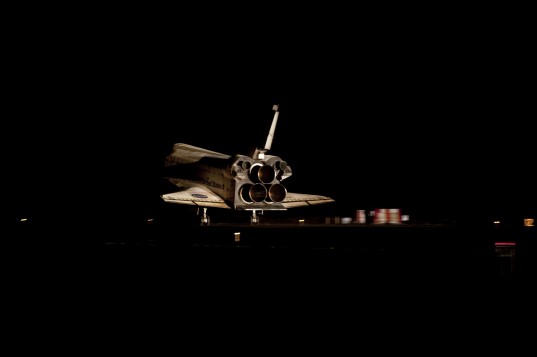 The end of an era

The space shuttle Atlantis touches down at Kennedy Space Center, bringing STS-135 to a close and ending the space transportation system program.

"Thank you Columbia, Challenger, Discovery, Endeavour and our ship, Atlantis. Thank you for protecting us and bringing this program to such a fitting end. God bless all of you, God bless the United States of America," radioed shuttle Commander Chris Ferguson after the landing.

Ferguson's comments were one of many patriotic exchanges throughout the final day of the astronauts' mission, which began with the last wakeup call of the shuttle program. Instead of playing a song meaningful to a single crew member, Houston's Mission Control beamed up a stirring rendition of Irving Berlin's "God Bless America," sung by all-American singer Kate Smith. Smith is well-known for belting out American show tunes as far back as World War II.

Atlantis' de-orbit burn began at 4:49AM EDT, when the shuttle fired its orbital maneuvering system engines to slow it enough to be overcome by the force of gravity, sending it into the atmosphere for an eventual landing in Florida a little more than an hour later. You can learn about the landing process in a previous article, Your guide to a shuttle landing.

To watch videos of the final wakeup call, de-orbit burn, and the landing, check out NASA's multimedia gallery.