The European Space Agency’s Herschel Space Observatory received its final command yesterday, as ground controllers directed the telescope to deplete the last of its fuel and slip into its final heliocentric orbit. Herschel’s observations had already ended on April 29, when the infrared observatory's liquid helium supply ran out.

The telescope was launched in 2009 to study early Universe galaxy formation, observe star creation and study the atmospheric chemistry of objects in our solar system. Although Herschel won’t be making any future observations, it leaves behind a vast archive of data that scientists can analyze for years. 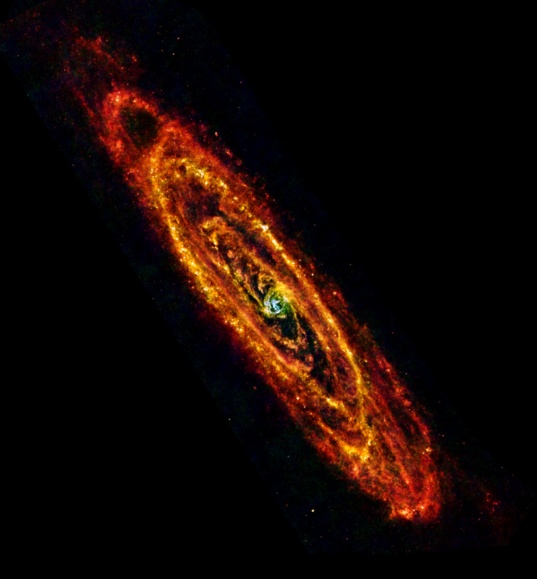 This far-infrared image of M31, the Andromeda galaxy, was taken by the Herschel Space Observatory on Feb. 6, 2013. Star-forming regions of gas with temperatures barely above absolute zero are shown in orange, while slightly warmer, older stars in the central bulge are shown in blue.

Herschel has a 3.5-meter mirror—for comparison, that’s bigger than the Hubble Space Telescope’s 2.4-meter mirror. It observed infrared light with wavelengths from 55 to 672 micrometers (one micrometer equals one millionth of a meter). In astronomy terms, that’s the far-infrared, which means the telescope could see the heat emanating from some of the coldest objects in the Universe, including chilly clouds of gas and dust where baby stars are just starting to form. 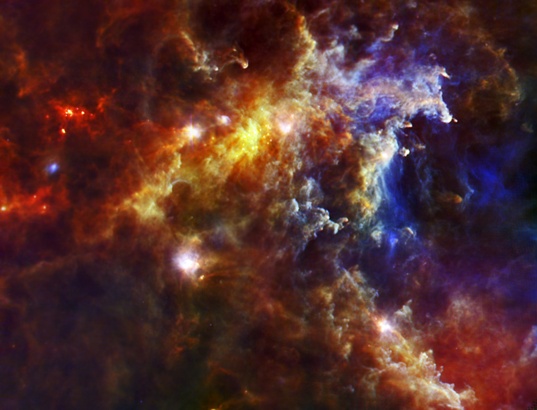 Baby stars in the Rosette Nebula

This image of NGC 2244 from the Herschel Space Observatory shows newly-formed stars shrouded in clouds of dust and gas. While the red regions on the left are baby stars similar to our own Sun, the bright blue splotches will form stars ten times more massive.

Powerful infrared telescopes come with a price: a shorter shelf life. Herschel’s detectors were kept at extremely cold temperatures—just above absolute zero—in order to keep the telescope’s own heat from interfering with its observations. To do this, engineers cooled Herschel with liquid helium, which was expected to last three-and-a-half years. Herschel stretched the supply an extra five months, making its final observation on April 29.

During its operational period, the telescope orbited the Second Lagrangian point, or L2, 1.5 million kilometers from Earth. Spacecraft at L2 are able to cruise around the Sun in line with the Earth, which offers several benefits. Unlike low-Earth orbiting spacecraft, L2 objects don’t pass in and out of Earth’s shadow several times per day, allowing them to stay at a constant temperature. They also avoid the warmth of Earth itself, which is important for heat-sensitive telescopes like Herschel (the James Webb Space Telescope will also orbit L2). 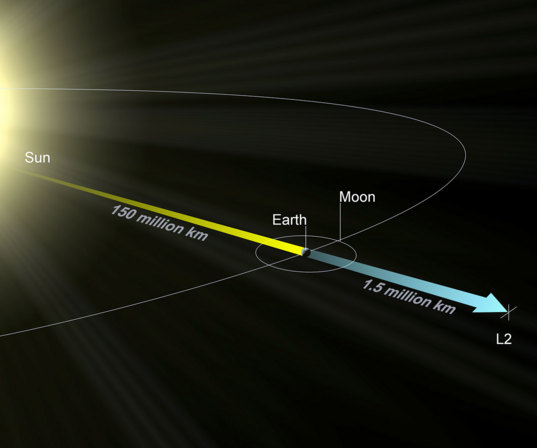 The Sun-Earth Second Lagrangian point, or L2, is one of five places orbiting spacecraft can remain stable relative to the Sun and Earth.

On May 13 and 14, ground controllers fired Herschel’s thrusters for 7 hours and 45 minutes, sending it into a heliocentric (sun-centered) orbit to avoid damaging other spacecraft. Before disposing of Herschel, ESA operators used the opportunity to conduct a series of technology tests. In an article released by the ESA, Spacecraft Operations Manager Micha Schmidt said “the ExoMars team asked us to do some validation using Herschel’s Visual Monitoring Camera; a similar model will fly on their mission. And the Euclid team asked us for some reaction wheel tests.”

To look through more pretty pictures that Herschel took during its four year mission, check out this interactive map that allows you to zoom in on specific Herschel images. 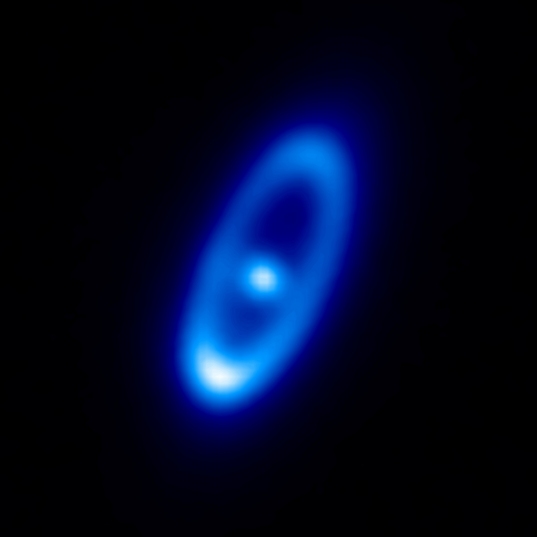 Fomalhaut and its debris disc

This image of the young star Fomalhaut shows a debris disc similar to what the Kuiper Belt may have looked like in our own solar system's early days. Fomalhaut is home to the first directly-imaged extrasolar planet, Fomalhaut b.

That's kind of sad - too bad they have to die so soon. But if we had an Enterprise class starship, it would be able to go out and service these various telescopes. Come on, people! We can get it started - and maybe finished - in our lifetime. It's closer to reality than you may think! Read about it here: http://www.buildtheenterprise.org/

I think that should be Fomalhaut, not Formalhaut (no "r"), at least if we're talking about alpha Piscis Austrinis.

Thanks Edward, I made that correction. - Jason

Thanks Jason for the report. I saw this on the NASA releases yesterday but they did not have the ESA link to the images. The galactic pancam is really nice as are the other images. The Andromeda galaxy in far infrared really shows it's age.quite vividly. As for Z's point, he is right about building the Enterprise. We really do need an Interplanetary Cruiser of that size. I don't think they can build all of the features they want at first but their approach is feasible and an Interplanetary Cruiser can easily come of it. For now the Orion program will be able to handle the servicing needs at L2 and other L points as needed. The double edge razor here is that to have Orion do science missions we need to sacrifice long term science to get science thus restart science later and hope the next generation will be able to carry on starting at our current level. That is most likely, unlikely. So to build the Interplanetary Cruiser, mankind needs to do this collectively like the ISS was built but with one major difference in construction. That would be the design must be done as one piece (that is 1 design company) and so assembled like the ISS, in modules. This really needs to be done as Z said. The spacecraft we are now playing with cannot do the role of DSE (Deep Space Exploration) as it needs to be done. The U.S. gov't proved with Orion that they are incapable of doing DSE correctly. Orion is a 4 crew S/C (spacecraft) down from the original 8 crew design. Gov't financial leadership based upon investment for the well being of their citizens is a concept they don't get. The proof in that statement is that we are building more 'bombs' than we really need to defend against the nut jobs thus not building the Interplanetary Cruiser. A fleet of these would be very nice.

Yes, I am fed up with the incessant partisan bickering in our government, and as Bob said, our government is oblivious to how financial leadership based upon investment should work. It would open up entire new areas of invention, innovation and economic opportunity and prosperity. The buildtheenterprise website really is worth checking out. There are links to other cutting edge technologies, including an "active" form of shielding by creating a mini-magnetosphere (such as that which surrounds earth, only on a much smaller scale) to protect against cosmic radiation.

Well said Z. I have never wanted to say this but due to my personal situation it may be time to make this allusion. Basing this upon Z's statement "There are links to other cutting edge technologies, including an "active" form of shielding by creating a mini-magnetosphere...", I have in experimentation in the early 1990 created a magnetic deflector shield (by accident only). I only noticed this when some dust particles were blown into the mag. field and bounced off of it. Electronic charging to strengthen the field would be the way to make this work quite well. Then you could deflect larger particles/objects. Yes it's Star Trek but it's also reality and a start just as is the cloaking device which was invented at Duke University in Durham, NC. I think it was 2005 or 2006. That prototype is not perfect but you cannot see what is hidden. If you know that to look for you can see see the boundaries of the field. At some point that will be corrected by someone.